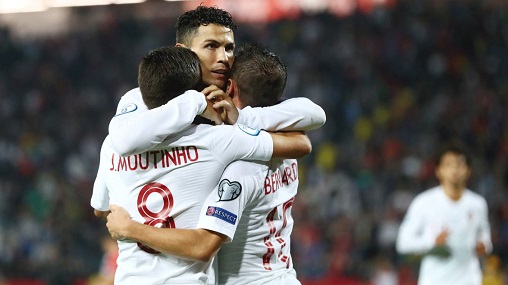 Portugal take on Lithuania in Vilnius where the Seleção have a great chance to produce a commanding win and smooth the way to Euro 2020 qualification.

Fernando Santos’ side are back on track in the European Championship qualifiers and tomorrow’s match provides an opportunity to edge closer to Group B leaders Ukraine, with the synthetic pitch at the LFF Stadium rather than the opposition likely to provide Portugal’s biggest obstacle to three points.

Portugal desperately needed a win in Serbia after two home draws to begin their Euro 2020 qualifying campaign. They delivered with a 4-2 victory, William Carvalho bundling home the opener before Gonçalo Guedes produced a great piece of individual skill to make it 2-0.

Some sloppy defending allowed Nikola Milenkovic to head home a corner but Cristiano Ronaldo tucked home Bernardo Silva’s through to restore Portugal's two goal advantage. Aleksandar Mitrovic smashed home to reduce the deficit before Bernardo Silva got the goal his performance deserved to put the result beyond doubt.

The three points took Portugal above Serbia and Luxembourg in Group B. The Seleção remain eight points and eight goals behind Ukraine with two games in hand including the return leg in Kiev on 14 October.

Looking good for Portugal to qualify for Euro 2020 without needing a playoff after last night's win in Serbia. Victories against Lithuania and Luxembourg home and away will guarantee 2nd spot in Group B. To top the group will probably have to beat Ukraine in Kiev. (Top 2 qualify) pic.twitter.com/QI9e1HEH6w

The match was noteworthy in the fact that Fernando Santos appears to have settled on his preferred formation and starting line-up. Santos stuck with the same starting XI that beat Netherlands 1-0 in the UEFA Nations League final, Gonçalo Guedes scoring again after his match winning goal at the Estádio Do Dragão.

William Carvalho and Danilo Pereira continue to be paired together which provides a platform for the attacking quartet of Bernardo Silva, Bruno Fernandes, Guedes and Cristiano Ronaldo. William’s recent transition to a box-to-box midfielder gives Portugal an added dimension, and Bruno Fernandes’ versatility means there is fluidity with the formation.

João Cancelo will replace the injured Nélson Semedo at right-back but I don’t expect any major changes in Lithuania. Despite the limited nature of the opposition, I think Santos will want to preserve continuity and look to make substitutions early in the second half with the match wrapped up.

Without being disrespectful, there is very little to get excited about when discussing Lithuania. They have lost 11 of their last 13 matches in all competitions, were beaten 3-0 at home by Ukraine on Saturday which followed a 4-1 defeat in Serbia.

Manager Valdas Urbonas is missing injured winger Arvydas Novikovas who has scored Lithuania’s last two goals. Captain and striker Fedor Černych is one of Lithuania’s most prominent players, plying his trade in the Russian Premier League with Orenburg, but has scored just one goal in his last 24 international appearances.

Three of Lithuania’s back four that started against Ukraine play in the Lithuanian top flight with central defender Markus Palionis signed to Jahn Regensburg in the 2. Bundesliga. It all adds up to a tough match against a Portugal side full of confidence.

Lithuania vs Portugal Head to Head

Portugal have beaten Lithuania on two previous occasions, both in international friendlies. The first was in 2000 at Estádio Municipal do Fontelo, a 5-1 win with João Pinto, Luís Figo, Rui Costa, Beto and Pauleta on the score sheet.

The next meeting was in 2004 at Estádio do Bonfim, the 4-1 victory secured with goals to Fernando Couto, Pauleta, Nuno Gomes and Hélder Postiga.

Portugal have won their last five away matches in European Championship qualification. Anything other than a resounding win in Lithuania would be a big surprise.

Despite some lapses in defence and conceding twice in Serbia, Lithuania don’t possess the same quality and should spend most of the match on the back foot. Santos’ new look team have a great chance to continue their progress and bridge the gap to Ukraine.

I think we may see one or two unforced changes from the 11 that started against Serbia. Cancelo will definitely get the start at right back and I wouldn't be surprised to see Danilo get dropped for one of Ruben Neves or if Santos fealing...

I think we may see one or two unforced changes from the 11 that started against Serbia. Cancelo will definitely get the start at right back and I wouldn't be surprised to see Danilo get dropped for one of Ruben Neves or if Santos fealing uncharacteristically confident, João Félix.

Lithuania are in a really poor run of form but this is still an away match against a team that is representing their nation. We need to give them the respect they deserve and approach this game with the right mentality.

I'm expecting a big win and hopefully another positive cameo from Félix.

i hope jota gets atleast 45 min the guy is defo our best choice of a number...

i hate the false 9 ,so boring

I would like to see a different lineup during this match. Let's see how our bench does as starters and super sub in Bernardo, CR7, William as needed.