Portugal suffer 4-2 defeat against Netherlands in U21 Euro qualifiers 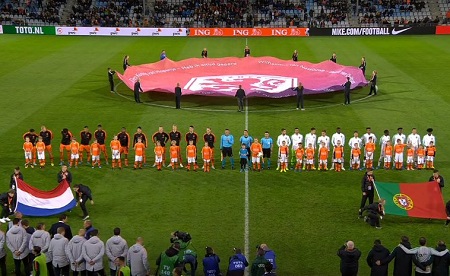 Portugal’s winning start to their U21 European Championship qualification campaign came to a halt following a 4-2 defeat against Netherlands in Doetinchem. Diogo Queirós and Gedson Fernandes both equalised but the hosts scored two late goals to take all three points.

Netherlands off to a flyer

Justin Kluivert signalled his intentions early on and started promisingly alongside AZ Alkmaar attacking duo Myron Boadu and Calvin Stengs. It was no surprise when the hosts took the lead as early in the 8th minute.

A Teun Koopmeiners shot deflected straight to Stengs, he squared to Boadu who tapped in with Portugal’s defence slow to react. Portugal exerted some pressure, Dany Mota heading wide and Miguel Luís beginning to create opportunities with Thierry Correia.

Maarten Paes diverted Rafael Leão’s fierce strike over the bar, Kluivert going on a solo run at the other end that resulted in a wayward shot. Most of Portugal’s attacks were coming down their right wing and it was from that side they equalised.

Diogo Queirós was in the box after a cleared corner and headed in Domingos Quina’s cross on the stroke of half time. Portugal were in the ascendancy as Jota replaced Quina to start the second half.

Portugal’s pressing presented two quick opportunities but they fell behind in the 50th minute. Stengs’ pass deflected off Diogo Leite and hit Nuno Tavares, it was a tough call as referee Roei Reinshreiber awarded a penalty.

Koopmeiners stepped up and made no mistake from the spot. Dany Mota’s goal was ruled out for offside while Leão was unsuccessfully trying to use his pace to break through the Netherlands defence.

Portugal profit from a penalty

Kluivert shot wide after a Queirós turnover before Portugal were awarded a penalty. Diogo Queirós was fouled by Owen Wijndal at the back post, Gedson Fernandes sending Paes the wrong way to make it 2-2.

The substitutions began in the 67th minute with Cody Gakpo replacing Kluivert, Rui Jorge bringing on Francisco Trincão, Nuno Santos and Pedro Mendes for Mota, Luís and Leão. The Sporting CP attacker had an immediate impact, making space and forcing a save from Paes but it proved a costly miss.

Gakpo started the move with a solo run, releasing Stengs who sent in a perfect cross to Boadu who made it 3-2. Portugal saw a penalty shout denied after Trincão’s ball hit Wijnal, Pedro Mendes flashed an effort wide but a third equaliser was not forthcoming.

More corners in added time resulted in a 15-3 corner advantage but it mattered little on the scoreboard. What matters is goals and Netherlands had time for one more. They broke clear once again, Koopmeiners finding Stengs who was too cool for Trincão and Tavares before firing past Diogo Costa.

Netherlands will be tough to top

Jong Oranje have a quality squad with five of starters currently playing at AZ Alkmaar. AZ are sitting third in the Eredivisie with the best defence and are three points behind Ajax and PSV.

Captain Teun Koopmeiners is a rising star in central midfield while attackers Calvin Stengs and Myron Boadu carried their prolific club form onto the international stage. Justin Kluivert is a dangerous winger and Gakpo is another forward on the rise.

This win followed a 5-1 victory against Cyprus that has Netherlands top of Group 7. There is plenty of football to be played and much could depend on the reverse fixture in March.

Portugal’s qualification aims took a hit but there is no shame in losing away to the Netherlands. The Dutch youngsters are full of exciting and fast talent that deserve to be at the tournament.

It was always going to be a tough match but Portugal had periods of sustained pressure and could have earned something from it. Rui Jorge needs wins in Norway and at home against Cyprus before hosting Netherlands in the return leg in March.

Jorge changed his approach slightly here with so many options at his disposal. He has a tough assignment finding the best combinations and formations to use but is not far off.

Portugal’s next match is in Norway on 19 November.