Wayne Rooney on Cristiano Ronaldo and World Cup 2006: “I’d have done the same” 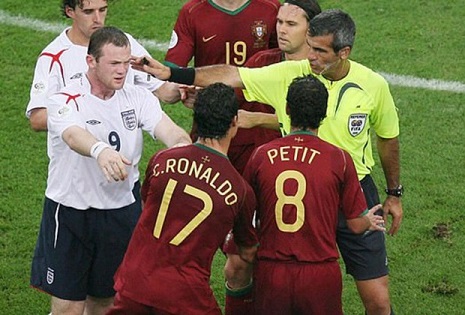 That many Portuguese football fans nurture a lingering sense of injustice and distrust for the English media can be traced back to the summer of 2006. In Gelsenkirchen, Portugal and England went head to head for the third time in four tournaments with a huge prize at stake: a place in the World Cup semi-finals.

The Seleção eventually won in a penalty shootout, but the game is remembered mainly for the red card issued to Wayne Rooney for stamping on Ricardo Carvalho’s private parts. TV replays shows the Argentine referee Horacio Elizondo was spot on with the decision, but much of the UK media vilified the role played by Rooney’s then Manchester United teammate Cristiano Ronaldo.

Rooney himself has now set the record straight in his column in the Sunday Times, saying: “I would have done the same thing in Ronaldo’s shoes.”

Three out of three

The match itself did not live up to the epic encounters of Euro 2000 and Euro 2004. In the former, Portugal came from two goals down to beat England 3-2, while in the latter Ricardo’s gloveless heroics in a penalty shootout saw Portugal move onto the semi-finals after an exhilarating 2-2 draw.

The 2006 game saw the Seleção come out on top once more, and Ricardo was at it again, saving three penalties as Portugal won 3-1 on spot kicks after a goalless 120 minutes. While the game lacked the excitement of the two aforementioned matches, there was no less tension as a war of attrition saw England battle hard and Portugal fail to take advantage of Rooney’s moment of madness which resulted in the Seleção playing with an extra man from the hour mark.

Perhaps the lack of much meaningful goalmouth action can part-explain the disproportionate amount of column inches and air time given to Ronaldo’s supposed deadly sins of pointing out to the referee that Rooney deserved red, quickly followed by a wink to Luiz Felipe Scolari in the Portugal dugout, played out in the tabloids as if it was all the perfect consummation of some Machiavellian plan.

Almost 14 years later, Rooney gave his brutally honest recollection of the incident, which goes very much against the reporting at the time by the British media. “I knew it was a red card and back in the dressing room I watched the rest of the game on a little TV, thinking: If we win this, I’m suspended for a World Cup semi-final and final and if we lose it’s my fault. It was the worst, weirdest feeling I’ve had in football.

“I had my phone in my hand and I was getting all these messages about Ronaldo. Of course, when he ran over to ask Elizondo to send me off, I pushed him away. In that moment I couldn’t believe what he was doing. But sitting in that dressing room gave me time to calm down and think. I put myself in Ronaldo’s shoes.

“Would I do the same? Probably. Would I be in the ref’s face to make sure he got sent off? If he deserved the red, if it would help us win – yes, no question. I’d do it tomorrow. Actually, I tried to get him booked in the first half for diving. And the wink thing, I didn’t see anything in that at all. It was nothing.”

That Rooney took time to step back, see the big picture and appraise a terribly difficult moment for him with such clarity speaks volumes to his fair-mindedness and sporting spirit and probably goes a long way to explaining why he enjoyed such a long and successful career.

“So I calmed down. I went over to Ronaldo afterwards in the tunnel. I felt it was important to speak to him while it was still fresh and to do it face to face. He gave me a look as if to say sorry but by then I had my United head on. I said I’ve no issues with you. Enjoy your tournament and good luck. I’ll see you in a few weeks – and let’s go try and win the league.”

As Rooney goes on to explain, what potentially could have destroyed a great era for Manchester United was in fact the launchpad for years of glory at Old Trafford.

“The press tried to drag it out all summer, saying we had issues, but we had none. In the first game of the new season we beat Fulham 5-1. I scored two and set him up for one and that calmed everything down. In the dressing room we were always really close.

“What had happened brought us closer together on the pitch. The next three years were our best as a partnership and brought three titles and the Champions League. My red card in Gelsenkirchen was the starting point. What came out of it was a bond between me and Cristiano Ronaldo that pushed us – and Manchester United – to the greatest highs.”