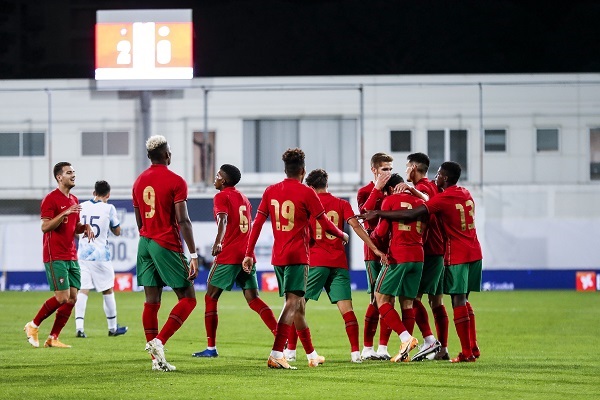 Portugal remain on track to qualify for the 2021 UEFA European U21 Championship after two routine wins. Rui Jorge’s side beat Norway 4-1 in Estoril and won 3-0 in Gibraltar with three Group 7 matches remaining.

Portugoal's Matthew Marshall breaks down both matches and suggests some players to watch that could be flying under the radar.

Portugal got off to a great start in Estoril with Florentino Luis bossing the middle of the pitch. His interception was the catalyst for Pedro Neto’s 6th minute opener as the Wolves winger cut inside and shot past Julian Lund.

It was soon 2-0, Neto leaving more than half of Norway’s defence statuesque as he fired under Lund’s replacement Kristoffer Klaesson.

The Esperanças were in total control until Diogo Leite presented Norway with a gift that was duly accepted. The Porto centre-back had simple passes available but he tried to get tricky, Jorgen Larsen capitalising, breaking clear and finishing past Diogo Costa.

Rafael Leão and Gedson Fernandes had opportunities to extend the lead before half-time but Norway’s defence stood strong.

Portugal withstand pressure and pull away

The match remained in the balance with Jensen getting behind Diogo Dalot, the new AC Milan man recovering to get back and clear the danger. Rui Jorge made two changes in the 62nd minute, Jota and Rafael Leão replaced by Fábio Vieira and Dany Mota.

Seven minutes later it was 3-1 after a Portuguese fast break, Pedro Neto assisting Vitinha who stepped inside Odin Bjørtuft and powered a shot past Klaesson. Neto immediately made way for Joelson Fernandes but Norway wouldn’t lay down.

Kristoffer Askildsen’s shot was blocked by Dalot and Costa tipped a Kristian Thorstvedt free kick over the bar. They couldn’t sustain the pressure, Portugal finishing the match strong with substitutes Joelson Fernandes and Daniel Bragança combining for Dany Mota who put the icing on the cake.

Gibraltar are the whipping boys in Group 7 and so it continued at Victoria Stadium. Jota put Portugal ahead in the 16th minute after he controlled a long pass, stepped inside Julian Valarino and fired past Bradley Banda.

Gibraltar were unable to get into Portugal’s half as Rui Jorge made two half-time substitutions. Gedson Fernandes replaced Diogo Dalot at right-back and Joelson Fernandes came on for Jota.

Normal service resumed as Vitinha and Fábio Vieira saw shots saved. It was an error that presented Portugal with their second goal, Banda’s misplaced pass intercepted by Vieira and Pedro Gonçalves making no mistake.

Pedro Pereira and Pedro Neto were introduced for Diogo Queirós and Vitinha in the 63rd minute as the match continued to its inevitable conclusion. Portugal made it 3-0 in the 80th minute, Mota’s clever ball presenting Gonçalves with his second goal of the match.

Portugal’s U21 side is almost identical to the team that failed to get out of the group stage at the 2019 U20 World Cup. The introduction of Nuno Mendes strengthens left-back with Vitinha and Pedro Gonçalves upgrades on Nuno Santo and Miguel Luís in central midfield.

The big loss is Trincão to the senior side but Pedro Neto has emerged as his successor with Fábio Vieira and Joelson Fernandes other options out wide. Rafael Leão’s back up in Poland was Pedro Martelo, now it’s Dany Mota.

The depth in Portugal’s U21 squad was highlighted by the six changes Rui Jorge made for the Gibraltar match. Notable absentees were Florentino, Gedson Fernandes, Pedro Neto and Rafael Leão.

Many of the Portugal U21 players are well known at home and abroad. Players to watch are Sporting CP midfielders Daniel Bragança and Pedro Gonçalves who could get plenty of opportunities under Rúben Amorim. Lions winger Joelson Fernandes displays the enthusiasm and impatience characterised by his 17 years of age and needs time to develop.

Plenty of the Porto 2018/19 UEFA Youth League winners are emerging in the squad including Diogo Costa, Diogo Leite, Diogo Queirós, Vitinha and Fábio Vieira. Let’s not forget Romário Baró and Fábio Silva who were key players in that team that have not yet featured prominently for Portugal’s youth teams.

Benfica’s Pedro Pereira is a curious player, currently on loan at Serei A club Crotone after spells at Sampdoria, Genoa and Bristol City. Dany Mota is an underrated striker who was sold by Juventus to Serie B promotion hopefuls AC Monza.

Portugal U21 remain six points behind runaway leaders Netherlands with a game in hand. They are unlikely to overturn the +37 goal advantage the Dutch currently enjoy, Jorge’s side currently at +15 goals.

Portugal are scheduled to take on Belarus at Cidade do Futebol in Lisbon on 12 November, Cyprus at the Estádio Municipal da Bela Vista in Portimão on 15 November and Netherlands at Estádio Cidade de Barcelos in Barcelos on 18 November.

Regardless of Portugal’s ability to overtake Netherlands at the top of Group 7, they are virtually guaranteed to qualify as one of the five best runners-up.