Portugal on the brink of U21 Euros after breezing by Belarus 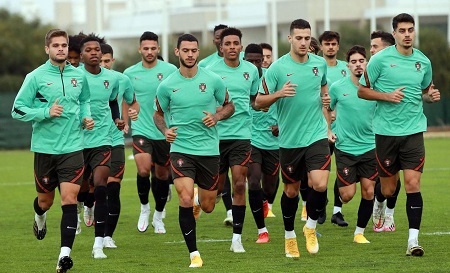 Portugal took another step towards the 2021 UEFA European U21 Championship after a comfortable 3-0 win against Belarus. Jota forced an early own goal at the Estádio Municipal de Portimão with penalties to Fábio Vieira and Gonçalo Ramos wrapping it up.

Portugal required just three minutes to take the lead in Portimão. Diogo Queiros’ long pass found Jota, he played a neat 1-2 with Gedson Fernandes before delivering a dangerous cross that Dmitri Prishchepa turned into his own net.

Fábio Vieira’s shot was saved as Portugal boxed Belarus into their own half. Jota fired over from close range in the 15th minute and four minutes later the lead was extended.

Another long ball into the box towards Vitinha hit Artem Shkurdyuk’s hand, Fábio Vieira making no mistake from the penalty spot. Long balls were the order of the day for Rui Jorge’s side and they were causing Belarus plenty of problems.

Jota saw a shot deflected over the bar before Prishchepa was booked for bringing down Dany Mota. Fábio Vieira stepped up and rattled the free kick against the post.

Prishchepa was lucky to stay on the pitch after a late foul on Vieira who was proving unplayable. The Porto playmaker was replaced by Sporting CP sensation Pedro Gonçalves at half time.

The second half saw more domination from the Esperanças. A Nuno Mendes cross hit the woodwork, Gonçalves shot wide and Dany Mota’s weak shot was saved. Portugal continued to lay siege to Belarus’ goal, Jota and Dalot with shots saved before the substitutions started to flow.

Belarus fashioned their first chance in the 79th minute but Diogo Costa was alert to smother the shot. The action swiftly returned to the opposite end of the pitch.

Gonçalo Ramos and Bragança went close before Goncalves shot wide. Portugal’s efforts were rewarded in the 89th minute after Ramos drew a foul from Vladislav Solanovich, the Benfica striker stepping up and smashing home the penalty to seal the deal.

Portugal U21 are three points behind Group 7 leaders Netherlands with two matches remaining. Rui Jorge’s side can qualify as one of the five best runners-up by beating Cyprus on Sunday before taking on the Dutch on Wednesday.

Portugal u21 were so wasteful in front of goal, I'm not surprised why the Netherlands u21 have 15 more goals scored than Portugal u21.

I will watch Portugal u21 vs Netherlands u21 should be a cracker of a game.

This match was bizarre: It was as if Portugal were trying to shoot around the net and not into it. If they hit the net half of the time they missed golden opportunities, this could've easily been 8 or 9-0. I don't know whether to be concerned...

This match was bizarre: It was as if Portugal were trying to shoot around the net and not into it. If they hit the net half of the time they missed golden opportunities, this could've easily been 8 or 9-0. I don't know whether to be concerned about the lack of finishing or encouraged by all those chances, but one thing's for sure - the future is very bright!