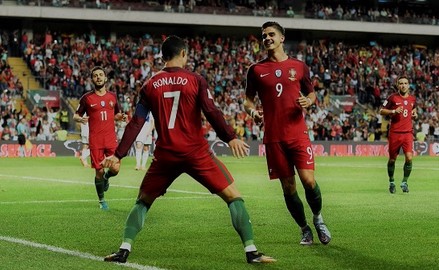 At the age of 35, Cristiano Ronaldo is still pushing boundaries, smashing records, and showing no signs of slowing down. The goal-scorer extraordinaire is now just seven goals away from becoming the all-time international goals record holder.

He scored his 102nd goal for Portugal in a seven-goal thrashing of Andorra on Wednesday and is firmly on course to secure his place as the most prolific marksman in international footballing history. It would be a fitting accolade for a player who has given so much to his country throughout a 17-year international career.

Of course, there are many outstanding achievements recorded by the player. On the cusp of achieving yet another record, we thought it would be fitting to break down the figures behind three other major records set by Ronaldo for club and country.

His move from Sporting to Manchester United in 2003 saw him become a regular in the competition, with the Red Devils regularly challenging for Europe’s biggest club prize. He scored 16 Champions League goals with United before joining Real Madrid.

During his time with Real, Ronaldo helped to ensure the club continued to win domestic trophies, although he won just two La Liga titles with the club in nine seasons. The club were domestic champions last season, however, and Los Blancos are the 2.2 favorites to lift the trophy this year in La Liga betting markets.

But it was in Europe where Ronaldo experienced the most success with Real, winning the Champions League four times. He amassed an incredible 105 goals in the competition, before adding another 10 with Juventus since joining the Italian club in 2018. His total of 130 goals is 13 more than his closest rival Lionel Messi.

Cristiano Ronaldo since returning for Juventus:

Most World Cup appearances for Portugal

Ronaldo’s exploits aren’t limited to club level as he has also been a great asset to his country, featuring in four separate World Cup tournaments, which is a record in itself for Portugal. His tally of 17 total appearances is also more than any other player to represent the nation.

Ronaldo’s efforts for his country, which include a European Championship win and Nations League success last year, are what set him apart from other players who’ve excelled at club level. The difference is that he can replicate his form on a global stage.

Fastest player to reach 50 goals in Serie A

Another distinct feature of Ronaldo’s career is his longevity at the very top level of football. While many players of his age opt for a move away from Europe’s elite leagues, Ronaldo continues to ply his trade among the world’s best in Italy.

Ronaldo is a back-to-back Serie A winner with Juventus and also reached 50 goals in the competition at a record-breaking pace. Despite his advancing years, he has continued where he left off from Real Madrid, netting 21 league goals in his debut season and adding another 31 in the last campaign.

That incredible form saw him named the competition’s Most Valuable Player and Footballer of the Year, proving he still has what it takes to mix it up with Europe’s most exciting young players.

Cristiano Ronaldo has been named as Juventus's MVP of the Year 💪 pic.twitter.com/3k7UYkyhRb

These are just three of the most eye-catching achievements set by Ronaldo across a career that has seen him earn accolades the world over for his footballing abilities. It seems perfectly clear that the Madeira-native is in no mood for slowing down, either.

Yes we all know Cr7 career and his greatness.
Not trying to be a douche. I am a huge Ronaldo fan.

Let’s wait until he breaks the record before posting an article like
This.

It's amazing to see him play at the clip he is playing at with his age. Dude is a beast.