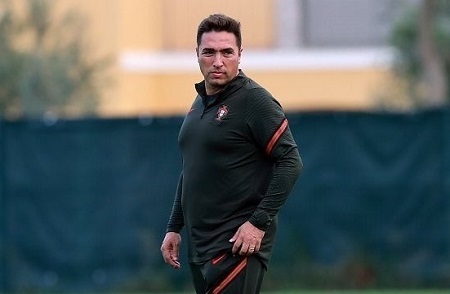 Portugal beat Netherlands 2-1 as the 2021 UEFA European U21 Championship qualifiers came to a close in Portimão. Fábio Vieira scored both goals for Rui Jorge’s side who will gain plenty of confidence by beating a Dutch outfit that had proved unstoppable.

Portugal got off to the best possible start in Portimão by taking the lead in the 2nd minute. Justin Hoogma produced a howler, his weak header pounced on by Dany Mota who rounded Kjell Scherpen with Fábio Vieira on hand to score.

Diogo Leite was booked for a late challenge on Azor Matusiwa, Javairo Dilrosun sending the free kick over the bar. A clever pass from Mota released Vitinha who shot over the bar as the match opened up.

Diogo Costa was called into action for the first time after Vitinha lost possession in midfield. Cody Gakpo surged forward and hit a low drive that was saved by the Portuguese goalkeeper.

Tomás Tavares clumsily brought down Justin Kluivert off the ball in the 31st minute, Dilrosun with another free kick that was straight at Costa. Thierry Correia was booked for a foul on Mitchel Bakker as the Netherlands started to take control.

Their efforts were rewarded in the 42nd minute as Portugal’s defence was stretched and sliced open. Dilrosun did well to isolate Tavares and release the overlapping Deyovaisio Zeefuik, his cross finding Gakpo at the back post who made no mistake.

Vieira at the double

Rafael Leão replaced the ineffective Jota at half time and it wasn’t long before Portugal regained the lead. Vitinha found Fábio Vieira between the lines, his shot taking a deflection and sailing over a stranded Scherpen.

Leão went close to making it 3-1 minutes later, his shot beating Scherpen but not Perr Schuurs who cleared the ball off the line. Gakpo shot wide from a presentable position before Gedson was replaced by Pedro Gonçalves.

Mota’s cross was desperately close to Vieira as Portugal were determined to take top spot in the group. Mota was replaced by Gonçalo Ramos in the 66th minute, Scherpen booked for clattering into Leão outside the penalty box.

Reis was replaced by Jurgen Ekkelenkamp and Myron Boadu made way for Kaj Sierhuis as Portugal spurned another glorious chance. A fast break saw Ramos and Leão combine to release Vieira, he cut inside and shot narrowly wide or the far post with Scherpen beaten.

Vieira made way for Daniel Bragança and Joelson Fernandes replaced an injured Rafael Leão as the Netherlands’ frustration grew. Rapid fire bookings to Jordan Teze, Mitchel Bakker and Justin Kluivert delayed their chances of an equaliser, Kluivert going closest as he headed wide in added time.

The Netherlands had been perfect in the qualifiers, winning all nine matches with 45 goals scored and just three conceded. One of those victories was a 4-2 win against Portugal in Doetinchem.

Portugal could have snatched top spot with a 3-1 win in Portimão, but it made little difference with qualification already assured. It was an impressive defensive performance against a Dutch side that had averaged five goals a game.

The victory showcased Vieira's importance to the side as he scored both goals and went desperately close to a hat-trick. He has replaced Trincão as the best player in the squad and will be a vital player in Slovenia and Hungary.

Difficult call with so much individual talent and watching on tv, but I think Fabio Vieira has come a long way, is the most effective attacker in the squad and has a lot of similarities to Trincão. I will have some more to say after the Netherlands match.

Most of the squad will pick itself but Portugal must not make the same mistake they made at the 2019 U20 World Cup. João Félix was left out of that squad so he could make his debut with the senior side at the UEFA Nations League Finals.

He was exactly the type of player that Portugal needed in Poland. His ability to unlock opposition defences and win matches with individual skill could have seen him win player of the tournament and help Hélio Sousa's side win the title.

Instead they crashed out in the group stage, Félix was ineffective in his debut against Switzerland and failed to get off the bench against the Netherlands.

Pedro Neto needs to be in the squad at the 2021 U21 Euros instead of warming the bench for the national side.

Spot on Matthew with your assessment of Pedro Neto.