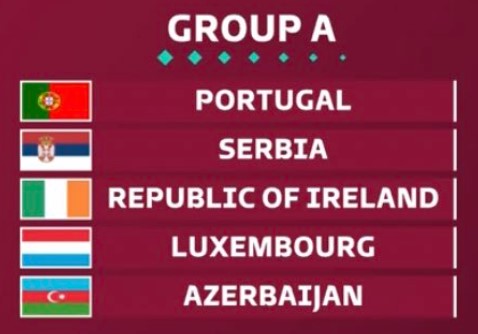 The World Cup qualifying draw took place in FIFA headquarters in Zurich on Monday in a behind-closed-doors ceremony due to COVID-19 restrictions.

Portugal were seeded in the top tier and have been handed a seemingly negotiable section, alongside Serbia, Republic of Ireland, Luxembourg and Azerbaijan. The winners of Group A qualify automatically for World Cup 2022, with the runners-up going into a playoff to make the tournament.

Later in the week it was confirmed hosts Qatar will also compete in the group as part of their preparations, with Portugal’s “away” game against the Middle Eastern nation played at a neutral venue in Europe, to be arranged.

The Seleção and Serbia meet again, the two nations having been paired in the same qualifying group for Euro 2016 and Euro 2020, with Portugal winning three and drawing the other of the four matches. In theory at least, it will be the Serbs and Portugal vying for first place, and Portugal coach Fernando Santos was in little doubt about the quality of the Balkan nation.

“If we look at their squad alone, Serbia is an elite football country. Their players are in the best European leagues, at the best clubs. They always have a squad of extremely high quality,” said the Seleção manager.

“But we also know they have difficulty in bringing out the quality of all their players in the team. When they don’t show this weakness, they are a very powerful team. It will be important for us to be well prepared for these games.”

Nevertheless, Santos is not looking to make excuses ahead of the campaign. “We have to respect our adversaries. Thinking this is already won would be our biggest mistake, but we are confident in our ability to qualify. We are the big favourites to win the group and if we don’t accept that now, when can we? We have to finish in first place.”

Qatar join in. A good omen?

Upon invitation from UEFA, Qatar will also compete in the group, albeit obviously with no points or positions at stake, as the World Cup 2022 hosts prepare their team for the tournament. Their “home” games will be played in Europe to avoid the need for their opponents to make long journeys.

This is not unprecedented. Euro 2016 hosts France also joined a qualifying group – curiously also Portugal’s – ahead of the European Championship on French soil four and a half years ago. Given what came to pass, this could be viewed as a good omen for Portugal! The Seleção will play Qatar on 4 September and 9 October 2021.

Well we are out of the Nations League, still a Euro to go (as defenders) then Ronaldo's supposedly last tournament for teh Selecao. I don't believe a last game for him at the World Cup. I will need a proper sendoff. I bet he plays a friendly in...

Well we are out of the Nations League, still a Euro to go (as defenders) then Ronaldo's supposedly last tournament for teh Selecao. I don't believe a last game for him at the World Cup. I will need a proper sendoff. I bet he plays a friendly in Lisbon and gets subbed off at 60 min to a standing ovation!

I guess its kinda early to announce a squad eh?

I honestly think our current U-21s could win this group. Anything less than 1st place is simply unacceptable.

Dzeko
This comment was minimized by the moderator on the site

The Great State of Serbia will rise again. My fellow Serbs all over the World will cheer and give blood for victory. Long live Serbia!!!