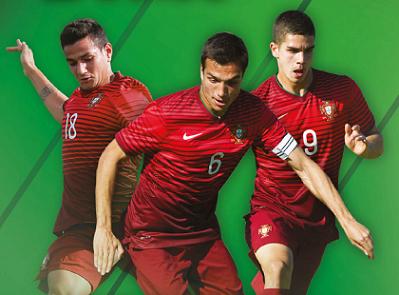 PortuGOAL’s reporting of the Seleção at the Under-20 World Cup begins today as Mitchell Rua kicks off coverage of the tournament.

Will New Zealand be the platform for the next world footballing superstar to announce his presence and the next Portuguese player(s) to define a generation?

Hélio Sousa has named a 21-man squad consisting of Portugal’s best young prospects under the age of twenty who will be vying to emulate the feats of his own footballing career, and that of his former team-mates and jewels of the Seleção crown that are Luís Figo and Rui Costa, and win the Under-20 World Cup for the third time in the country’s history.

In the midst of years of frustration and an apparent steady decline of the senior Seleção, a nation once again turns to a group of teenagers touted as potential world-beaters, with expectations reminiscent of that of yesteryear’s own ‘Golden Generation.’

The likes of Marcos ‘Rony’ Lopes, Gonçalo Guedes and André Silva make up a host of names on the tongues of Portuguese pundits and fans, and will hope to also make themselves names that will register with football analysts and journalists worldwide after having graced the pitches of the ‘Shaky Isles’.

Sousa’s convocados are largely comprised of 15 players who featured for Portugal at last year’s U-19 European Championship in Hungary, where they settled for silver after being edged out by the Germans in the final.

The likes of André Silva, Pedro Rebocho, Gelson Martins and skipper Tomas Podstawski, who all starred at the said tournament, have impressed domestically in the Portuguese second tier for their respective B teams, where the majority of the squad currently ply their trade.

Also, new faces have joined the U-20 set-up in the form of Janio Bikel from the Netherlands and the much touted Seixal graduate Gonçalo Guedes, who has appeared 31 times for Benfica B and notched eight goals, and who at only 18 years of age is the youngest member of the squad.

Similarly, Raphael Guzzo, who started against Germany in the U-19 European Final, has starred for Northern club and former Primeira Liga mainstay GD Chaves, who are two games away from being promoted to the Liga NOS, on loan from As Águias.

But, in all honesty, the biggest name by a mile on this list is none other than Marcos Lopes. More commonly known as ‘Rony,’ the Brazilian born starlet is touted as the next big thing in the Portuguese game, albeit amidst uncertainty over which Seleção he will represent - Brazil or Portugal. Lopes has played for Portugal throughout the youth levels, and a memorable showing in New Zealand will surely go a long way to making up his mind for good.

A stop-start season dogged by injury and suspension at French side Lille has seen only flashes of his brilliance, but now at full fitness, much is expected from A Estrela de Belém, whose inclusion surprised many as he was tipped to star at the U-21 European Championship.

Twenty-six years since he became World Youth champion, Hélio Sousa is now at the reins of a Portuguese side that is aiming to repeat the same feat as in ’89, and two years later in ’91. “They are memories that will stay with me for my whole life,” said the gaffer, having just announced the team he would be taking to New Zealand.

Sousa’s own experience at the 1989 edition of the tournament as a central midfield lynchpin will only improve the Seleção’s chances on bringing home silverware. Having worked with the majority of the squad during the U-19 European Championship campaign, the manager’s passion for his work and players is apparent, as he hopes to instil strong values in his young charges, both on and off the pitch: “these are moments that stay with someone, and we want our players to live these moments intensely, to be better players tomorrow.”

The young Portuguese starlets began to congregate today 11 May at Rio Maior, their home for the next five days before venturing ‘Down Under’ to Sydney, Australia. Os Lusos are scheduled to hit the tarmac on the 18 May, where they will butt heads with fellow World Cup participants in the form of Ghana and Brazil in friendlies (Click here for an interview with organiser Manuel Camara, in Portuguese).

Portuguese physiologist João Brito, who works for the FPF’s Health and Performance Unit, has said that “going to Australia was planned as part of the preparations so that jet lag would not be a problem during the competition,” countering issues such as fatigue, irritability and loss of appetite, amongst others.

On 27 May, the Seleção will finally arrive in New Zealand, 1500 kilometres north-east of Sydney, Australia. The Portuguese side have been placed in Group C, where they will face Senegal, Colombia and Qatar in a tricky group.

Hélio Sousa warned upon Senegal’s qualification in March that: “It is a group that was already strong, because it contains the runner-up from South America (Colombia) and the best team in Asia (Qatar).”

With Brazil potential opponents if the Portuguese finish second, Sousa and co. will look to start on the front foot against the Senegalese on 30 May, although a finish as low as third may lead to qualification for the knockout phase, other group results and standings permitting.

So excited for this tourney. Happy Rony was picked, as well as Goncalo. What's going to be interesting is that we have five great players (Rony, Goncalo, Ivo, Gelson, Andre) and only four positions for them to play in. Who starts and who ends up...

So excited for this tourney. Happy Rony was picked, as well as Goncalo. What's going to be interesting is that we have five great players (Rony, Goncalo, Ivo, Gelson, Andre) and only four positions for them to play in. Who starts and who ends up being a quality sub? Too bad we can't have them all on the pitch without yielding a lot defensively. But we should be stoked as fans because, under the circumstances, this looks like our best possible squad. Hopefully they stay healthy. Forca Portugal! Tom, love the podcasts! Dedicate at least one to the youth tournaments this summer please!!!