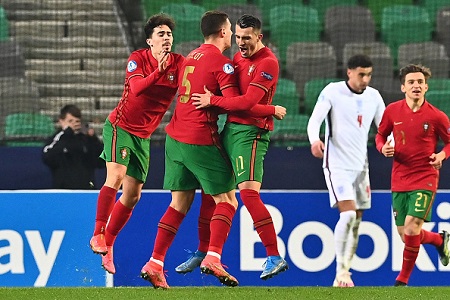 Portugal made it two straight wins at the U21 European Championship group stage with a 2-0 victory against England. Dany Mota finished a fast break in the 64th minute with Trincão converting a penalty ten minutes later.

Rui Jorge’s side are in pole position to qualify for the knockout rounds after a convincing display at Stadion Stožice in Ljubljana. PortuGOAL’s Matthew Marshall breaks down the contest and looks forward with one match to play.

Rui Jorge made two changes to the side that beat Croatia with Fábio Vieira and Dany Mota coming in for Trincão and Tiago Tomás. Portugal threatened early with Thierry Correia’s cross met by Mota at the back post, his headed effort cleared by Ben Godfrey.

A poor pass from Tom Davies presented Vieira with a chance but it was weak and easily saved by Aaron Ramsdale. Diogo Leite’s error allowed Edward Nketiah to surge into the 18 yard box, Diogo Dalot alert to snuff out the danger.

Dalot shot high and wide from long range as the Esperanças regained control, going close to scoring twice in the space of a minute.

Correia’s long distance shot was saved by Ramsdale, Godfrey clearing the danger with Mota ready to pounce. From the resulting corner Pedro Gonçalves’ volley forced another save from Ramsdale, Florentino unable to steer the rebound on target.

Mota showed some great footwork to drive to the byline before the break, his cross met by Gonçalves who saw his shot deflected wide.

Changes at the break

Both managers made changes at half time with Florentino and Gedson replaced by Daniel Bragança and Trincão. Aidy Boothroyd brought on Eberechi Eze for Emile Smith Rowe.

Eze was looking dangerous but it was Portugal that continued to create the chances. Vieira fired over the bar and Vitinha's shot sailed narrowly wide. Noni Madueke had a rare effort for England, harassed at the edge of the 18 yard box before shooting over the bar.

That was as close as the Young Lions got as Vieria was replaced by Francisco Conceição in the 63rd minute. A minute late Portugal were in front.

Oliver Skipp lost possession, Portugal pouncing with Gonçalves racing clear and presenting Mota with a chance that he converted into the bottom corner.

Godfrey was fortunate to only receive a yellow card for kicking Mota in the face, Portugal’s goal scorer lasting a few more minutes before being replaced by Gonçalo Ramos.

Ramos hadn’t been on the pitch for more than a few seconds before winning a penalty. Marc Guehi clumsily stepped on his foot a metre inside the area, Trincão stepping up and giving Ramsdale no chance from the spot.

England were done and dusted. Ramos fired wide as Portugal continued to be the only side capable of creating chances, but it was game over in Ljubljana with the result rarely in doubt.

Portugal’s squad has progressed nicely since the disappointing group stage exit at the U20 World Cup. The defence is largely intact and Diogo Dalot has improved since being dropped from the starting side in Poland.

The addition of Vitinha, Fábio Vieira and Pedro Gonçalves is significant with the midfield gaining much more creativity and goal threat.

Rafael Leão hasn’t been missed with Dany Mota’s clever play continuing to shine and the emergence of Tiago Tomás giving Rui Jorge another option up front.

They still have to reach the knockout rounds, but Portugal have shown in the opening two games that they are one of the top sides in the tournament.

Florentino Luís’ lack of game time was evident against Croatia and he was hooked at half time against England. Daniel Bragança replaced him and didn’t do much wrong, it wouldn’t be a surprise to see Florentino benched for the Switzerland match.

Florentino’s loan move to Monaco hasn’t worked out, and if he continues to warm the bench in the Principality his starting spot could be under threat.

England are the perfect example that a lot of individual talent doesn’t necessarily constitute a good team. The Young Lions have failed to register a shot on target in two games, their confidence looks shot and it appears Aidy Boothroyd's time is up.

Portugal made them look ordinary, controlling the match and creating all the chances. The Esperanças fully deserved the three points but won’t be taking anything for granted against Switzerland on Wednesday.

Big result from the U-21. This is the Trincão that Barcelona paid for, the English simply could not handle this guy tonight. Super solid showing all around and I was a little nervous going into this game given the talent that England has in their...

Big result from the U-21. This is the Trincão that Barcelona paid for, the English simply could not handle this guy tonight. Super solid showing all around and I was a little nervous going into this game given the talent that England has in their side. Dany Mota, Mr. Underrated. This guy is super efficient in front of goal and seems as if he’s been flying under the radar for quite some time now. Good showing from Bragança, I’m a huge fan of his, definitely one of sporting’s most exciting players right now. Chico Conceicao looks like a little Messi sometimes, and got some deserved minutes in the game.

There’s some real defensive solidity in this side. Querios and Leite make a great pairing, one that helped Porto win the UEFA Youth League in 2019. Thierry Correia left Sporting prematurely but he’s been finding some form with Valencia, and with the U21 squad.

I’m excited to see which defenders will be a part of the senior squad in a few years. In addition to Querios and Leite we’ve got David Carmo (who IMO if wasn’t injured maybe would have received a call-up to the Seleçao), Inacio, and Quaresma who all have the potential to be great centrebacks.

Could this be the next golden generation? Let’s see what Rui Jorge cooks up - I’m not totally convinced by him but the talent in this squad is undoubtedly there.

Great result - certainly lifted the mood in comparison to yesterday!

This side, unlike the senior Seleção, has been really fun to watch. They play an attractive brand of possession football, but they have also looked very disciplined without the ball.

Vitinha again was the standout player for me. He actually...

This side, unlike the senior Seleção, has been really fun to watch. They play an attractive brand of possession football, but they have also looked very disciplined without the ball.

Vitinha again was the standout player for me. He actually reminds me a lot of Marco Verratti - he's technically superb, possesses a high football IQ, and is also not afraid to put in a tackle.

Forever Young! I want to be... FOREVER YOUNG! Thank you young guns for lifting my spirits this weekend! It's interesting isn't it? Players like Vitinha on the bench for a team starved of creativity and goal-scoring in the Prem... Makes no sense....

Forever Young! I want to be... FOREVER YOUNG! Thank you young guns for lifting my spirits this weekend! It's interesting isn't it? Players like Vitinha on the bench for a team starved of creativity and goal-scoring in the Prem... Makes no sense. And Dany Mota! Why do people hate this guy..? He's so good at holding the ball up and linking up play from the 9 position. Far superior to anything the senior team has to be honest, and he's pretty quick too! Underrated indeed. I think everyone looked good to be honest, even Florentino. I mean, he's clearly rusty from lack of game time but what did he do that was so horrible out there today? Lost a couple of balls? So what? He's been performing better than I was expecting.

I don't have too much faith in Rui Jorge either but I hope I'm wrong. Certainly has the team playing attractive football.

Total domination from start to finish...thought I was watching the 2010 Spain WC team...didnt realize we bacame tiki taka type footballing nation but beautiful executed midfield possesion game...england couldnt get near and i will finally...

Total domination from start to finish...thought I was watching the 2010 Spain WC team...didnt realize we bacame tiki taka type footballing nation but beautiful executed midfield possesion game...england couldnt get near and i will finally compliment rui jorge for some tactical nous. I think he realized without 4-5 recognized starters and a smaller more technical side...tactics needed to change. Bravo! There is a lot of talent in that team!

And to think there was no nuno mendes, david carmo, pedro neto, rafael leao or jota ( who is having a tough time but does excel at his age group). I think joao felix still is 21 as well. If they are good now imagine the depth and quality.....i had a peak and only france and spain really have a few players in senior side that would make a reasonable differemce if they dropped down...germany england only have 1 or 2 but i cant see a huge difference.

The big takeaway for me and it was a point i had made in the comments for thr Serbia draw was the midfield and b.silva. u21s play with only 1 pivot amd two attacking creative midfielders....at the senior level we play with one....makes you wonder how much better we might be if bernardo drops back to the right side of a 3 in terms of creativity but also keeping the ball and then adding a pacy winger...you have to play to the strengths of the team you have.