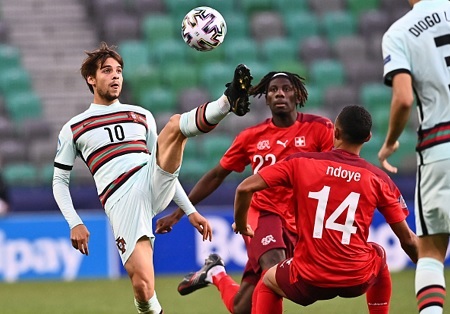 Portugal beat Switzerland 3-0 at Stadion Stožice to cruise into the U21 European Championship quarter-finals. The victory made it three consecutive victories, the Esperanças winning Group D without conceding a goal.

Rui Jorge made three changes to the side that defeated England. Daniel Bragança replaced Florentino Luís in the holding midfield role, Trincão came in for Gedson Fernandes and Dany Mota made way for Tiago Tomás up front.

Vitinha headed wide after some nice interplay with Tomás before Switzerland fashioned their first chance. Dan Ndoye fired into the side netting from a tight angle.

Trincão’s effort lacked power and was easily saved before what proved to be Switzerland's best chance of the match. Toni Domgjoni shot wide from a promising position, but the action would soon return to the other end.

Diogo Dalot saw his shot blocked after some nice build up play, Pedro Gonçalves releasing Tiago Tomás who couldn’t beat an onrushing Racioppi. Trincão shot wide from distance as Portugal entered the break having had 70% possession.

Portugal began the second half as they finished the first, superior in every department and making Switzerland chase the ball. In the 60th minute it was 2-0.

Fábio Vieira’s clever through ball evaded the Swiss defence, Tomás forcing a save from Racioppi with Trincão on hand to tap into an empty net.

That signaled a triple substitution from Rui Jorge as Vieira, Trincão and Tomás made way for João Mário, Francisco Conceição and Gonçalo Ramos.

Three minutes later it was 3-0. Conceição’s pressure on Jasper van der Werff paid off, the diminutive winger winning the ball and producing a deft finish past Racioppi.

Switzerland’s match took another turn for the worse when Miro Muheim was booked twice in rapid succession and sent off.

Gedson Fernandes and Filipe Soares replaced Pedro Gonçalves and Vitinha before a moment to sum up Switzerland’s performance. A corner fell to Domgjoni, his shot sailing well wide as Portugal cruised to the finish line.

The win against Switzerland resembled Portugal’s performances in the group stage. Croatia came closest to scoring, but Diogo Costa didn’t have a save to make against England and Switzerland.

The Esperanças largely controlled matches from start to finish, dominating possession and showing superior technical quality, teamwork and desire. They hardly gave the opposition a sniff in front of goal.

Rui Jorge deserves a massive amount of credit for Portugal’s success in Slovenia. He made the right call by dropping Florentino for Daniel Bragança and successfully integrated Fábio Vieira and Trincão into the starting side against Switzerland.

The tactical fluidity of Jorge's team was evident throughout, his players working as a solid unit and always available to close the opposition down.

On the rare occasion that a defender made a mistake, someone was there to clean up the mess.

Many would have thought it impossible that Portugal could perform at their peak without Florentino, Gedson and Rafael Leão in the starting side. They did just that with Fábio Vieira, Vitinha, Pedro Gonçalves, Dany Mota and Tiago Tomás stepping up to the plate.

Portugal take on Italy in the quarter-finals at Stadion Stožice, Ljubljana on 31 May. If they beat the Italians they will face the winners of Spain vs Croatia in Maribor three days later for a spot in the final.

The current U21 side may even be more fun to watch than the 2015 side that had the likes of Bernardo, William, João Mario, and Raphael Guerreiro.

The midfield in particular is absolutely superb. Vitinha, Bragança, Vieria, and Pote are all...

The current U21 side may even be more fun to watch than the 2015 side that had the likes of Bernardo, William, João Mario, and Raphael Guerreiro.

The midfield in particular is absolutely superb. Vitinha, Bragança, Vieria, and Pote are all incredibly calm and composed in possession. The intricate one touch passing combinations and clever off the ball runs are a joy to behold - why can't the senior team play this way?

It is also important to note that they did not concede a single goal in any of the three group stage games. I'm not completely sold on either Queirós or Leite as individual defenders but they have understandably developed a very strong understanding after all these years of playing alongside each other for both the Porto youth sides and for the Seleção.

I have also been pleasantly surprised with Thierry Correira. He looked really solid defensively in all three games and he also offers some quality going forward.

Trincão is perhaps the crown jewel of this current squad, but my MVP of the group stage has been Vitinha - this kid is a real player.

Imagine if Rio Jorge had João Félix, Nuno Mendes, Pedro Neto, and Rafael Leão at his disposal! This might be the most talented generation Portugal has ever produced, especially in terms of sheer depth.

If German fans are anything like Portugal fans they will sound like this on their version of Portugoal.net, probably called Germangoal.net run possibly run by Tomas Heinrich Kundert an Austrian ex pat who moved to...

If German fans are anything like Portugal fans they will sound like this on their version of Portugoal.net, probably called Germangoal.net run possibly run by Tomas Heinrich Kundert an Austrian ex pat who moved to Germany and fell in love;


- We should immediately fire Loew. Ter Stegen never plays as keeper again, a bland rabbit could do better. Leroy Sane sucks, Gnabry sucks. The Timo Werner experiement is OVER!!

- What are Kimmich and Gundogan doing? They suck for the national side! They cant attack/defend/score/pass/make bacalhau or barbrque a nice shorico!

- Loew is incapable of utilizing our young talent! We should play my fathers grandmothers cousins pet turtle Hans Uber Stan! He has like 2 goals in division F so play him!

- REEEEEEE!!!! REEEEEE!!!!! FIRE EVERYONE, EVERYONE SUCKS!! Why is there no Var? Why did Tomas Mueller throw his captains armband in anger? HE SUCKS, we play better without him!!! REEEEEEE!!!!!

(pretty much some version of this)

Does Tomaz Heinrich Kundert look like Portugoal's Tom Kundert, but with a moustache?

Oh my God, this is Post of the Year! Absolute masterpiece!

Chris, yes and possibly an eyepatch. ?

Also, why did Timo Werner make the team, he doesn't know how to shoot!

What a performance, what a group stage! Thought i was watching barcelona and the commentators on RTP were also speaking about that comparison with the midfield 4 completely dominating possession, one touch, intricacy, switzerland were bamboozled...

What a performance, what a group stage! Thought i was watching barcelona and the commentators on RTP were also speaking about that comparison with the midfield 4 completely dominating possession, one touch, intricacy, switzerland were bamboozled especially in the first half...soo pleased. Someone asked why the senior side dont play like this...you will notice that Pote (an attacker for sporting but can play in mid) who was apart of the mid 3 along with braganca and vitinha...2 creative mids who can pass and play with braganca the anchor and a false 9 in veira with tomas and trincao operating as wide attackers. In order for that too happen in the senior side...bernardo would drop back ala vitinha and bruno would be on the other side ala Pote with one pivot but a very fluid mid 3 and then in front you would have jota and neto with ronaldo in the middle or jota and ronaldo with felix in the middle as a false 9....santos tried that but the other key is this...the u21 players were fluid, passing and moving, never stopping so that space always opened up....they were not static at all...senior side the opposite. In order to use the strengths of the team ala u21...you need to trust that bruno and bernardo can occupy those midfield roles with one quality pivot...or you have renato and bernardo as 2 attacking mid with one pivot and bruno plays false 9...so basically a diamond mid with jota and ronaldo up top.

You will see leao and jota in this team for the quarters...maybe not starters though after these games...i think nuno mendes will be with senior side and one of neto or trincao will stay with senior side. Carmo wont be ready and i think rui jorge likes the 2 porto boys despite djalo or carmo being better individually.

Wow - congrats to the U21s (and Rui Jorge I guess...). The fact that they managed to keep clean sheets through the group stage is really something. Dalot and Correia possess some pretty solid talent. To be honest, although Querios and Leite won...

Wow - congrats to the U21s (and Rui Jorge I guess...). The fact that they managed to keep clean sheets through the group stage is really something. Dalot and Correia possess some pretty solid talent. To be honest, although Querios and Leite won the Youth League with Porto and have proven chem, these guys aren’t stellar CBs, and as mentioned before me, there are better options (Inacio, Carmo, Djalo) but they know how to play well together and get the job done.

This Portuguese team has got to be one of the best teams in the tournament, if not, the best. Prior to the England game, English pundits were as per usual, overhyping their players. They’ve got some talent YES but when I hear “Curtis Jones is on his way to be the next Stevie G” and they barely know who Vitinha is (who IMO is FAR better), I get a little agitated. British media hype gets a little monotonous, so that victory felt extra sweet.

Switzerland didn’t play an awful game, but boy oh boy, the Portuguese were in complete control of the game. Let’s hope to god they don’t fluff up in the knockout rounds, or remind us of that painful finals defeat to Sweden in 2015.

Tiago Tomás is an absolute grinder, I really, really like his play style. He presses and drives at the opponent until they cough the ball up or boot it down the field. Thankfully, we’ve got some solid finishers that can put the ball into the net. Good to see Chico grab a nice goal as well. Having your dad be a former soccer star and now your coach must be nice, but I think this kid has the potential to be special. Does he not remind you of young Messi, just a little bit?

Some exciting talent here, let’s hope they deliver in the next stage.

U21 team has been excellent no doubt .
It’s tough completion.

Anyways assuming no one sustains a serious injury, here is my predicted 23 man portugal
Euro 2021 squad based on the recent games and how I think Santos will approach it ;

U21 team has been excellent no doubt .
It’s tough completion.

Anyways assuming no one sustains a serious injury, here is my predicted 23 man portugal
Euro 2021 squad based on the recent games and how I think Santos will approach it ;

DannySLB
This comment was minimized by the moderator on the site

DannySLB
There are no comments posted here yet