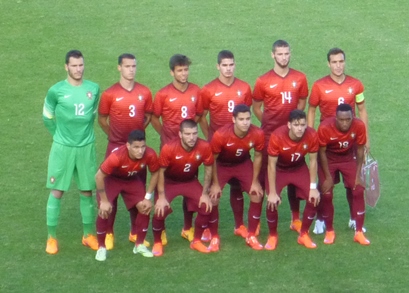 Brazil defeated Portugal 1-0 at Kogarah Oval in the final friendly match before the U20 World Cup gets underway in New Zealand next weekend.

The first half was devoid of clear cut chances, the second half an entertaining affair which saw chances at both ends, Real Madrid striker Jean Carlos scoring the winner in the 68th minute.

Hélio Sousa selected a 4-3-3 formation with counterpart Rogerio Micale setting his team up in a 4-2-3-1 with Judivan leading the line. Marcos Guilherme looked dangerous for Brazil in the opening stages as he found plenty of open space on the left wing. Portugal were struggling to make an impact, André Silva unable to control Ivo’s pass over the Brazilian defence.

Kenedy’s bicycle shot went over the bar after nice work from Gabriel, who in combination with right back João Pedro were giving Rafa and the Portuguese defence plenty to think about. Goalkeeper André Moreira was replaced by Tiago Sá after 30 minutes.

André Silva was an isolated figure up front, Portugal’s midfield trio of Podstawski, Ramos and Lopes unable to impress as they were busy nullifying the Brazilian threat. Brazil’s midfield duo of Boschilia and Sporting Braga’s Danilo were bossing the game as Gabriel raced through the Portuguese defence with his shot wide.

João Nunes earned the first yellow card of the game as he stopped another dangerous Brazilian attack, Portugal with their first sustained attack coming in the 39th minute, Gelson Martin’s volley well wide of goal. Rony Lopes pushed higher up to support André Silva as the gap between the Porto striker and his supporting cast was alarmingly vast.

The game opened up five minutes before half time, Brazil continuing to put sustained pressure on Portugal’s left back Rafa with Rebocho on the right flank also held back by the Brazilian threat.

Danilo’s shot bounced awkwardly in front of Sá with the Sporting Braga keeper doing well to divert it out for a corner but Portugal were getting into the game. Sousa’s substitutions were providing much more attacking threat and support for André Silva but Portugal were exposing themselves in defence.

Gelson Martins produced a fine pass to Nuno Santos with his shot going wide but shortly after Brazil took the lead. Caju got into a dangerous position and crossed into the box, the Portuguese defence unable to clear the danger which allowed Jean Carlos to pounce, his left footed shot smashed into the goal off the inside of the post.

Brazil broke free shortly after, a 4 on 4 with no shot eventuating before Sousa made two changes, Gonçalo Guedes replacing Gelson Martins out wide and Riquicho giving Rebocho a break at right-back.

Rafa’s shot from distance went over the bar before Caju showed some samba technique to please the crowd, bamboozling the Portuguese defence with some silky skills down the left flank. Sousa brought on Estrela for Chico Ramos and João Vigario for André Silva up front as Portugal tried to find the equaliser.

Guzzo shot wide as Portugal pressed, a succession of corners led to Guedes’ snap shot well saved by Jean. An unfortunate incident in the final minutes saw Nuno Santos appear to stamp on Caju while the defender was on the ground, players converging and tempers flaring (pictured) before order was restored and the match ended in friendly fashion.

Brazil deserved the narrow win as Portugal were unable to pose any serious threat in the first half. Sousa’s substitutions provided more attacking emphasis in the second half but Brazil demonstrated superior technical ability on the day. Jean Carlos scored the winning goal and he appears to be one of the Brazilian players of the future alongside Guilherme and Boschilia.

Sousa surely has much more up his sleeve before the World Cup kicks off for Portugal against Senegal in seven days time. Gonçalo Guedes looked dangerous off the bench as André Silva will surely need more assistance in the attacking third if Portugal are to score the goals they need to succeed in the tournament. Forca!