U20 World Cup: Portugal lay down a marker 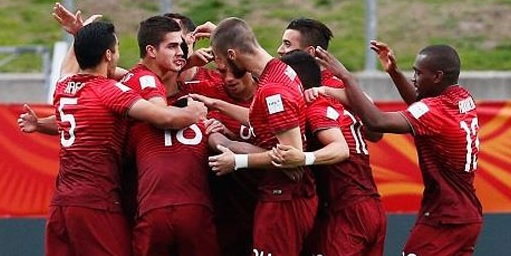 The Seleção kicked off their U20 World Cup campaign in New Zealand in perfect fashion with a commanding 3-0 victory over Senegal at Waikato Stadium in Hamilton.

The fourth quickest goal in the tournament’s history was fired in by Gelson Martins after only 26 seconds.

A late flurry from super-sub Nuno Santos followed, who assisted André Silva and bagged a goal of his own, as Portugal served notice that they mean business "down under".

The Seleção’s first goal was underlined by a team effort conducive with the vein that Portugal has operated under Sousa since the U19 European Championships.

Relentless pressing from the outset after the Senegalese kick-off forced Koto’s men to lose the ball to Guedes on the edge of the box. The Benfiquista played in André Silva from the left where the striker took a touch before taking ball on the turn with a smart swivel, playing a dinking effort into the path of Gelson. Evading his markers, the onrushing Sporting B winger looped a deflected ball over the flailing keeper and into the top corner of the net.

Portugal would follow up the goal with smart combination play and quick exchanges, with Gelson and Riquicho operating expertly on the right and André Silva combining well with intelligent, incisive passing with his back towards goal and on the turn.

Rony Lopes tended to play further forward on the left-hand side, whilst also playing off André Silva through the centre, with Sousa’s formation resembling that of a 4-2-3-1 or 4-2-4 more than the 4-3-3 atypical with the Portuguese game.

On the back-foot from the outset, Joseph Koto and his side did not fold, exerting the same attacking flair that qualified the West African side 2nd in their group en route to the tournament.

In the 15th minute, a clutch save from André Moreira was the start of a series of ensuing half opportunities for the Young Lions as they gained some rhythm. Koné easily swept aside the efforts of the usually stalwart and reliable Duarte, leaving himself isolated and one-on-one with the Moreirense keeper, only to find his hard, low shot grasped safely from a dive. A minute later, Wagué tried an effort from just inside the centre circle after André Moreira hesitated following his goal kick, only for the ball to bounce harmlessly wide.

With the balance of play levelling out, and the Senegalese taking the bulk of possession, the Portuguese looked the much more likely source of goals, with fine transitional play consisting of quick exchanges, one-twos and combinations today’s special, as Podstawski anchored the midfield and sprayed diagonal balls for his forwards.

This was evident in Portugal’s response after a sumptuous ball to Guedes from the skipper of Polish descent led to the forward grazing the top of the crossbar after cutting inside on the left, leaving Cissé reeling.

Moments later, Portugal would again rue another missed opportunity, as Rony’s cross was expertly headed by Nunes towards Silva, only for the Tripeiro to have his effort saved by Sy. Silva would follow up that effort with a lovely one-two exchange with Riquicho setting up a lovely taken first-time effort from the Lion that was well-saved by the Lorient shot stopper.

The second half continued in a similar vein as the first as a lively affair played out. The vastness of the pitch was exemplified as both sides opened up, with Senegal’s lack of cutting edge and incisiveness in the final third, coupled with their poor defensive record in qualifying (10 goals in 5 encounters) becoming more apparent as the Portuguese took a stranglehold on the affair.

Only moments after the restart, Guzzo, who had been very quiet up to that point, grabbed the clutch and put the Portuguese into gear as a tremendous effort from 25 yards rattled the bar. The Seixal graduate’s thunderous strike stemmed from Rafa’s tidy play on the left, setting up a Guedes dummy for the subsequent shot, foreshadowing the five-star second half performance to come.

The next 15 minutes following on from the Guzzo effort bore fruit to a flurry of Portuguese chances as the no. 7 grew into the contest and showed the form that has put him ahead of the likes of Francisco Ramos and Janio Bikel. Shots from André Silva and two efforts from Gelson were all assisted from the boot of Guzzo, with Lopes’ effort past the hour finding Sy in its path once again.

Having struggled against Brazil a week prior and also in the first half of this tie, Rafa began to fine his rhythm on the left with Gelson in support, setting up André Silva with a peach of a cross at the 72nd minute, with the no. 9 hitting his first time shot straight at Sy when it would’ve been easier to score. This was followed up by another wasted chance from Silva, a scuffed shot that dribbled horribly wide, culminating from a Guzzo nutmeg and cutback that put the ball on a platter.

Sousa looked to his bench for the catalyst that would end the tie once and for all, taking off the disappointing Guedes and Lopes for Francisco Ramos and Ivo, but it was the man between the Senegalese sticks that was keeping Koto and co. in the match, clawing out a Silva volley after the Porto starlet looked certain to break his duck.

Portugal continued to miss golden opportunities, as the ever-present Martins, Rafa and Francisco Ramos all came close, but with Senegal’s fleeting attempts to get forward a staple in the second half, Sousa’s charges did not let up and they were finally rewarded upon the introduction of Nuno Santos.

A simple run down the left flank was followed up with a divine cross from the Benfica winger, picking out Silva who finally scored after, soaring the highest between his markers, spectacularly heading the ball past Sy and into the net in the 90th minute.

Two minutes later, and into stoppage time, Santos did it again. Guzzo, who completely bossed the midfield as Portugal’s no. 8, turned provider, setting up the two-minute old substitute for a chipped goal 35-yards out after a moment of madness from Sy having run out of his area, much to the delight of the Portuguese bench as they swarmed the goalscorer.

Portugal will now play Qatar on the 3 June at the same venue, Waikato Stadium, Hamilton, at 16:00 local (05:00 Lisbon time), aiming to seal qualification into the next round with a game in hand.

Comprehensive from Portugal, and Sousa's changes did the trick with Guzzo playing exceptionally well and Riquicho threatening from right back. Thrilled for Andre Silva to get his goal and hopefully he can kick on from here.

Comprehensive from Portugal, and Sousa's changes did the trick with Guzzo playing exceptionally well and Riquicho threatening from right back. Thrilled for Andre Silva to get his goal and hopefully he can kick on from here.

Much more to come from Portugal who have so many options off the bench. In prime position to qualify from the group, confidence should be sky high against Qatar who got destroyed by Colombia in the first half but came back slightly in the second.

Andre Silva looked like Postiga, Almeida, and Eder rolled up into one here. I hope his not another case of a below average Portuguese forward. Hopefully his late goal gives him confedience

So many spurned chances from this team.. luckily Senegal did not put up much of a threat cause I could easily see Portugal against decent opposition drawing/losing the game. The scoreline should be double and yes Andre Silva was very poor,...

So many spurned chances from this team.. luckily Senegal did not put up much of a threat cause I could easily see Portugal against decent opposition drawing/losing the game. The scoreline should be double and yes Andre Silva was very poor, continuing our striker tradition. Having sacrificed sleep to watch, I'll be expecting much more the next time around.