Nuno Mendes and Euro 2020: “Youth and experience are important for the squad” 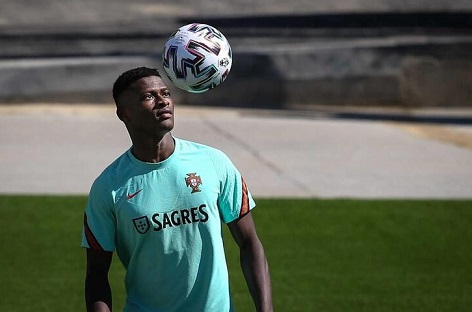 The youngest member of Portugal’s Euro 2020 squad, Nuno Mendes, was just thirteen years old when Portugal became European Champions on that famous Paris night in 2016. Now 18, Mendes is just starting out his career, but is already making headlines having helped Sporting win the league, having enjoyed a fabulous season and as the subject of intense transfer speculation.

Although not entirely comfortable in the media glare, Mendes was the chosen player at today’s press conference as Portugal continue their preparations for the tournament. PortuGOAL brings you the quotes.

On integration into the squad: “I spend more time with my Sporting teammates, as you’d expect, but I get on with the others too. They all encourage me – I’m a bit shy. Us, the younger players, are more reserved, we don’t talk much, but the more experienced players help us a lot. But the mix of youth and experience is important for the squad, and makes the squad stronger.”

Does winning the league with Sporting give you extra status: “It’s all the same for me. I won the championship with Sporting, my club side, but that’s nothing to do with this. I’ve come here with a different focus, thinking about the Euro. It was a dream season for me. I’ve realised lots of dreams, which has helped me no end in my career. I’m still at the beginning, but I’m going to keep working as hard as I can so these dreams come true.”

On turning 19 on the day the Seleção play Germany (Portugal’s second group match): “It’s going to be an important day for me, whether I play or not, but the most important thing for me is that the team win. A victory would be a good present for me.”

On Raphael Guerreiro, mentor and/or competitor for left-back: “Raphael is a great player, that’s why he’s here. He’s transmitted a lot of ideas to me; not only him but the others too. I want to take advantage of this moment to develop as much as possible. Raphael plays for Dortmund and that shows the quality he has. He was a champion in 2016, he’s a great player, I’ve learned a lot from him. He’s as good with his left foot as he is with his right and he can play in several positions on the pitch.

On the need to be intense in training: “I’m not one to give out much fruit [“to give out fruit” in Portuguese means to dish out rough treatment]. Sometimes it’s good to do that, but I haven’t given stick to anyone yet!”

On the busy season: “I played lots of games, but the moment you are called up to the national team your energy levels shoot up to maximum levels again. I’m young, I’ve got a lot to give, that’s what matters.”

On transfer speculation: “I’m a Sporting player and I’m going to continue to be. I’m not thinking about that. I’m more focused on the Euro and helping the team.”

Mendes was until recently a member of Portugal’s U21 team, helping the young Seleção reach the European Championship, so it was no surprise he made a point of adding: “good luck to the U21s in their game against Italy today.”