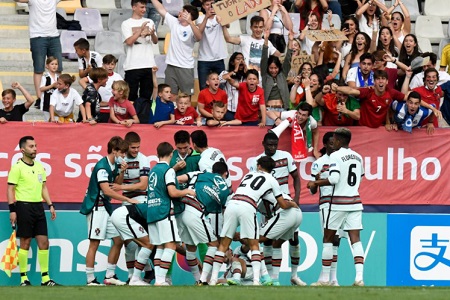 Portugal beat Spain 1-0 in the 2021 European U21 Championship semi-final at Stadion Ljudski Vrt in Maribor. Rui Jorge’s side were second best for much of the contest, but defended resolutely and went ahead through a late own goal.

Fábio Vieira found some open space, surged forward and saw his cross deflected into the Spanish net by Jorge Cuenca. Portugal are aiming to win the tournament for the first time after being runners-up in 1994 and 2015.

It took Portugal 15 minutes to fashion their first chance, Vitinha’s shot tipped over the bar by Álvaro Fernández.

Portugal’s best chance of the half came through Rafael Leão in the 29th minute. The AC Milan forward burst into the box and fired wide from a tight angle.

Leão ran into the box again and looked to have been taken down, but his penalty claim was denied and he was booked by Swedish referee Glenn Nyberg.

Spain soon regained control with Brahim Díaz’s shot deflected wide and his next effort blocked. Cucurella was still getting too much room and combining with Gil to double team Diogo Dalot.

Brahim Díaz shot over the bar as he continued to cause Portugal’s defence problems but it was the Esperanças with the final chance of the half, Diogo Queirós shooting over the bar after a free kick.

Luis de la Fuente made a change at the break with Bryan Gil replaced by Juan Miranda and Cucurella pushing up to the left wing. If Diogo Dalot thought that would bring some respite, he would have been severely mistaken.

Rui Jorge brought on Florentino Luís for Gedson Fernandes in an effort to add some solidity to midfield, but it initially had little effect.

Juan Miranda forced a save from Costa, Díaz drove into the box and saw a penalty claim denied before Manu García burst clear and shot wide.

Portugal were now playing exclusively on the counter attack with Tomás the lone striker. They slowly started to see more ball and went close to creating a chance after Fábio Vieira released Jota. The decisive moment came not long after, in the 80th minute. 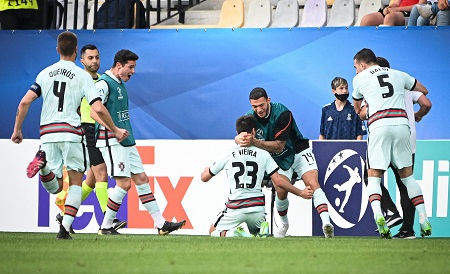 Fábio Vieira gets it done

Vieira was left wide open on the right wing, he burst into the box with his cross taking a wicked deflection off Jorge Cuenca and the underside of the crossbar.

Jorge brought Pedro Pereira on for Vieira to kill some time as Spain threw everyone forward. Portugal were resolute however, defending for their lives during the six minutes of added time and keeping the clean sheet intact to advance to the final.

Portugal were far from their best in Maribor, and the Spanish onslaught at the start of the second half had an ominous feeling about it. Rui Jorge had to act, and his triple substitution in the 65th minute alongside a subtle tactical switch went a long way to turning the tide.

Spain had scored in 15 of their last 16 knockout matches at the European U21 Championship. Keeping a clean sheet in a game of this magnitude against such a classy team deserves huge respect.

Diogo Leite played one of his best matches for Portugal and Abdu Conté justified his starting spot with a solid defensive performance.

Vitinha praised the team spirit after the match: "We had to suffer a lot, psychologically and physically it took a lot from us. The spirit in the group is incredible, that was the reason why we reached the final."

"It was a very difficult game, of course we don’t play all our games against an opponent that is so well organised. It was important that we show we can play well even if we don’t have a lot of the ball. We knew it would be difficult."

Football proves time and time again that the best team doesn’t always win. Rui Jorge conceded that Spain were the better side for most of the game: "Spain were superior in the quality of the game. We had to defend deeper than normal and create opportunities on the counter attack."

"We had to show our maximum against Spain, a very strong team, and you have to recognise that there are strong teams in the competition."

Spanish boss Luis De la Fuente highlighted the quality of both teams and was philosophical as he looked at the bigger picture: "This could have well been the final. It was a game between two great teams and rivals. I am satisfied with the work we did, as I am with the future of Spanish football."

Congrats on reaching the finals!

This was not the display that I was anticipating, but nonetheless the job got done. I’m not sure how intentional it was but Rui Jorge’s squad resembled some Santos tactics - let them play with the ball and sit...

Congrats on reaching the finals!

This was not the display that I was anticipating, but nonetheless the job got done. I’m not sure how intentional it was but Rui Jorge’s squad resembled some Santos tactics - let them play with the ball and sit tight, defend and focus on the clean sheet before anything. Other than Cucurella’s strike that hit the post, Spain didn’t have any clear-cut chances, even though they did have the majority of possession. When having guys like Vitinha, Vieria, and Bragança in the XI, our squad should be trying to play the ball more. The midfield core did not perform anywhere as well as they did against Italy. Gedson should not be starting, plain and simple. Hopefully Baró convinced the coach that he deserves to start, or opt for Florentino as 6 and have Bragança push up.

I was surprised by the early substitutions, but Rui Jorge knew what needed to be done. Florentino acted as an anchor, securing the midfield, cleaning up the ball, making important challenges, and allowed the other midfielders to push up. Baró has that needed grit and strength and as well as calmness on the ball that we needed so desperately. Leão didn’t have an awful game and neither did Mota, but Jota and Tomás could run the press much more effectively, and on the break looked more threatening.

Solid showing from Abdu Conte, so happy that he got the deserved start, defended well against Diaz and Yeremy when he came on. Dalot played pretty well, especially given the fact that he had to mark Gil and Cucurella, arguably the best players for Spain.

There was some real defensive solidarity today, very different from the Italy game. I thought Leite was our best player on the pitch. Definitely thought Portugal would’ve had more of the ball, but they got the job done.

All the best for the final! Fingers crossed for a first Euro U21 win on Sunday.

Not the sexiest goal to win with, but we rarely get this kind of luck in any of our national teams.
I was shocked to see Leao come off considering he was our only attacking threat. But it worked out in the end.
The game against Italy showcased...

Not the sexiest goal to win with, but we rarely get this kind of luck in any of our national teams.
I was shocked to see Leao come off considering he was our only attacking threat. But it worked out in the end.
The game against Italy showcased our attacking prowess but defensive weakness.
But our defense was on point today. We'll need that on Sunday against Germany I'm assuming as they're already up 2-0 in the first half!

You know a team is great when they play bad and still beat you. Now I'm sure they can actually win the trophy. I don't remember when was the last time a non senior Portugal team was so tough under pressure.

Having actually watched the majoity of this group win the u17 and u19's, the same qaulity and resilience is there. I am suprised that we gave so much possession up to spain like we did against italy...a 360 degree difference from games against...

Having actually watched the majoity of this group win the u17 and u19's, the same qaulity and resilience is there. I am suprised that we gave so much possession up to spain like we did against italy...a 360 degree difference from games against swiss, english and croatia....i have a feeling that jorge lost 3 pieces and is trying to fit others that just dont have the same qualities...i think after these 2 games...he might have figured out his best 11. I cant blame him, you lose 3 starters with 1 type of characteristic and try to fit 3 new with another...you cant expect the same team....only flashes...

So excited for final....this team has fate going for it...because in 2015...we should have won

manny
This comment was minimized by the moderator on the site

Gedson and Dalot had a horror show..
Not sure how jorge will have his setup against Germany, but they seem to play much more direct, through the middle..
Lets hope they can pull it off..