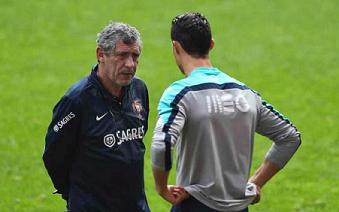 The man who masterminded Portugal’s first ever major tournament victory at Euro 2016 gave a range of interesting answers as he prepares to defend the title of European champions.

PortuGOAL rounds up the best quotes.

“Only one team has ever won two European Championships in a row, which was Spain in 2008 and 2012. And even Spain needed a bit of luck. In the 2012 semi-final they only beat Portugal on penalties, when Bruno’s [Bruno Alves] penalty hit both posts... This proves the difficulty in winning a competition of this nature. Another indication is to simply look at the number of different teams that have won the tournament.

“What would be a failure? I don’t like that word, but I understand the question. Obviously, as contenders to win, if we don’t get through the group phase, it will be a failure. But I don’t believe that will happen to Portugal. This is an extremely tough group, and I don’t know why three such strong teams are in the same group; it’s difficult to fathom. I can’t remember ever seeing it before.

“But I think people have the right and are correct to demand that we do everything within our power to win, using our quality, organisation, commitment, and I believe we are prepared for it. Portugal have the ability to go toe-to-toe with any team that also has ambitions to win the tournament.”

“If we believe Cristiano is not in good form, and is not giving the team what we intend, obviously he will have to be a substitute and he will have to understand. Cristiano is not a player that brings much to the team from the defensive point of view. We don’t even want him to! That was always the case, and the team knows that. What Ronaldo brings is the respect of our opponents and goals.

“Some of our other players have a bit of Cristiano Ronaldo in their club sides. Their coach builds the team around a player who will be most influential. There are always players who are not part of the defensive process because the coach believes that’s the job of others. But here for Portugal I can’t put 4 or 5 players out on the pitch who only play the offensive side of the game, as that will bring us problems.

“All the players understand that. I’ve congratulated them for the way they have worked hard, their commitment, their attention to detail. The individual quality is there, that doesn’t change or doesn’t get lost.”

“In our group Portugal and France will be playing all their matches away. Hungary play two at home and one away, and Germany play all three at home. It’s not only happening in our group; it’s happening in all of them. In this group phase, which is always a very complicated stage, home advantage might have a big influence. This affects the sporting integrity somewhat.”

“Portugal had great players in 2016 who are not here. The individual characteristics of these players are substantially different to what was the basis of the team in 2016. This team is different to the 2016 team, although there is not so much difference compared to the 2019 team.”

Cigarettes for a month!

“The goal is to be European champions. Since I became Portugal manager my thinking is that we go into every tournament to win it. I’m taking a suitcase for one month, and tobacco too!”

Forca Fernando smoke it up mate,but please donas tou say if ronny is not up for it bring on a sub...

i will be settlng my alarm ⏰for all the games ...

With thr right mind set tactics we can win...

Forca Fernando smoke it up mate,but please donas tou say if ronny is not up for it bring on a sub...

i will be settlng my alarm ⏰for all the games ...

With thr right mind set tactics we can win it,we have the players, but can they play as a team...

I don’t want to be a Debbie downer here, but, I think this euro is going to be a big disappointment. Although on paper this could be the greatest Portugal team ever, the majority of our players are going into this euro in bad form.

I don’t want to be a Debbie downer here, but, I think this euro is going to be a big disappointment. Although on paper this could be the greatest Portugal team ever, the majority of our players are going into this euro in bad form.

The only players I can think of that are in good form at the moment are Ruben Dias, Renato, André Silva rafael guerreiro (sorta) Guedes (sorta) and Bernardo. Any time I’ve watched pepe play this season, he’s been amazing. But he’s also very injury prone.

Everyone else is either in bad form or meh at best.

Read More
João João
There are no comments posted here yet