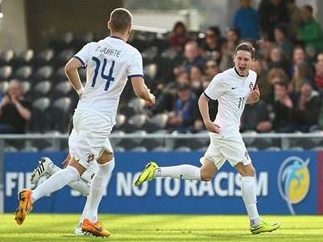 Portugal confirmed top spot in Group C with a professional display that resulted in a 3-1 win over Colombia tonight at Otago Stadium, Dunedin.

An early Nuno Santos strike and two more goals from striker André Silva made it a third straight win for the Seleção in the tournament, scoring 10 goals and conceding just one in the process.

Within three minutes, As Quinas were already a goal to the good, with a thunderous Nuno Santos free-kick finding its way into the back of the net, repaying Sousa’s in the in-form Benfica B winger. An André Silva brace from a penalty and a looping header finished up the Portuguese scoring in a match where Sousa’s charges took their opportunities and defended astutely.

A late Cafetero surge bore fruit in the shape of a goal by substitute Borré that sealed 2nd spot in the section on goal difference for Colombia, blemishing the score line from a Portuguese perspective. Coupled with a Ramos suspension putting him out of Portugal’s next game and Estrela being stretchered off in the game’s dying embers, Sousa will undoubtedly need to reshuffle the side ahead of a clash against one of two third-placed teams in Group A or F in the Round of 16 come Thursday.

Another quick Portuguese start marred by a stalemate

The first half of the tie was a largely underwhelming one, with chances few and far between, the most notable a Nuno Santos effort. A superb free-kick from the no. 11 from a ferocious left-footed bomb that Montero had no chance of stopping echoed his instant impact displays in preceding games, giving the European Championship runners-up the lead three minutes in.

The next 20 minutes were that of a stalemate, as play was confined to midfield. Spells of possession, with little to show for it from both sides, marred an exciting start to a much anticipated tie as fouls dogged the encounter.

Restrepo’s charges first decent opportunity of the game would come in the 27th minute from the dead ball, as chances from open play were almost non-existent. A curling effort 30-yards out from Vitória Setúbal loanee Joao Rodriguez went up and over the wall and just inches wide of Moreira’s post.

Although Colombia grew in ascendency in terms of possession as the game neared the break, Sousa’s side looked the more composed and concerted in their exploits, with the South Americans struggling to penetrate the Portuguese box.

The flexible 4-2-3-1/4-2-4 formation adopted by Sousa in recent weeks remained persistent, regardless of Lopes’ absence in the playmaker role as Guzzo took the no. 10 mantle, playing off the striker and sometimes going wide in place of Ivo.

The tendency for the latter to drop back was prevalent, collecting the ball from deep and running at and in between the lines in an attempt to counteract Colombia’s overloading of the midfield. When defending, this tendency was cemented, as Portugal took up two banks of four with a 4-4-2.

At half-time, the possession read 54% in favour of Colombia, explained by their flurry in the last minutes of the half and the fact they were chasing the game, with three attempts for both sides, two of those coming from free-kicks

After half-time, Portugal would look the sharper and more seasoned of the two sides for the majority of the second period, but this didn’t come without its scares.

A last ditch sliding tackle from the inspired Nunes, who had taken over from the benched Podstawski’s captaincy duties, saved Portugal from conceding early as Borré found himself one-on-one with Moreira.

Ten minutes later Portugal was granted some breathing space. The tirelessness of André Silva was rewarded with a goal, duly converting from the spot having been taken down in the penalty box. A poor clearance from Angulo went backwards towards the Colombian goal, finding Silva whose delicate touch set him up for a chance at goal before Montero unceremoniously crashed into the Porto B striker.  The no. 9 dusted himself off and dutifully converted into the bottom right corner as Colombian hopes dissipated.

Picking up from his goal scoring heroics at the U19 European Championships, Silva made it a brace without hesitation in the 67th minute from a bout of déjà vu from the Senegal game. Tidy play in the middle of the park found… Nuno Santos. With room to run on the left, the Seixal Academy graduate shuttled down the wing before picking out Silva with a peach of a cross. The FC Porto striker directed a looping heading that found its way into the back of the net. It was Silva’s 4th goal and Santos’s 3rd assist of the tournament.

A shifting of the tide

Following Silva’s goal, the complexion of the match took a 180 degree turn. A couple of decent Colombian opportunities followed that foreshadowed the mini revival. Restrepo’s two  substitutes combined, with an incisive, defence splitting pass on the turn from Barrera finding Santos Borré one-on-one with Moreira, and the Colombian neatly slid his left-footed effort past the shotstopper into the bottom corner, tainting the Moreirense junior’s unblemished record.

The Colombians would go on to dominate the last 15 minutes of the encounter, pinning the Portuguese back on their haunches as the Seleção looked content with the score line, with Moreira continuing his battle with Borré, making another clinical save as he came out on top in a sprint to the ball.

Restrepo looked to the same bench that had gotten his side back into the tie, brining on Steven Lucumi for Joao Rodriguez, whilst Sousa rewarded Santos with an early exit as Rony made a cameo.

Borré continued to look the only chance of a Colombian revival, troubling the likes of Rebocho and Duarte on Portugal’s left as he peppered Portugal’s goal to no avail. Restrepo could only lift his arms in dismay as his side attacked Portugal relentlessly without reward, a penalty call rightly waved away by Costa Rican official Henry Bejarano as the match ended 3-1 in favour of the Seleção das Quinas.

A couple of hitches along the way

As well as the end of Portugal’s perfect defensive record, a blemish on an otherwise professional display came from Francisco Ramos. Cautioned, the Porto player will miss Portugal’s Round of 16 tie. Nonetheless, with the likes of Guzzo and Bikel astute replacements, and Rony to take his mantle as Portugal’s no. 10, Sousa will not be too fazed.

Congruently, Portugal may be without midfield lynchpin Estrela for the rest of the tournament after he was stretchered off in the 90th minute with what looked like a fractured rib after an untimely clash. This will be a concern for Sousa and co., as the Orlando City youngster is the only real adept replacement for defensive midfield stalwart Podstawski.

Nevertheless, the way Portugal conducted themselves against such esteemed opposition having already clinched qualification in a professional, resolute manner was dutifully recognised by gaffer Hélio Sousa. “We were aware that we had to be strong all the time,” the winner of the 1989 edition said post-match. “Today we knew what to do when we had the ball and also when we didn’t, which is also important.”

Portugal will now play the third-placed team from either Group A or F, with the likes of Fiji, Uzbekistan and hosts New Zealand all possibilities. The match is scheduled to be played at the ground that hosted their first two matches, the Waikato Stadium, Hamilton on Thursday, 11 June at 19:30 local time (08:30 Lisbon time).

For more on Mitchell (twitter: @Tripeiro87) and check out PortugalFutbol.net.

Victor
This comment was minimized by the moderator on the site

I wrote this in the previous article. I think the star of this team, other than some players. has been the Head Coach. He has shown an ability to bench some of the big name players and play the guys who seem to be on the best form, as well as try...

I wrote this in the previous article. I think the star of this team, other than some players. has been the Head Coach. He has shown an ability to bench some of the big name players and play the guys who seem to be on the best form, as well as try different things when having a comfortable lead. I think another coach would be hesitant to bench a guy like Rony Lopes, or Tomas, or Gelson Martins. But he has seen how much guys like Estrela, and Nuno Santos have played and have given them the chance to star.

Have to agree with Victor. I think most U20 managers would feel the pressure to always play a kid like Ronny. This manager was part of the golden generation that won two back to back cups, so I'm hoping that experience is helping him figure which...

Have to agree with Victor. I think most U20 managers would feel the pressure to always play a kid like Ronny. This manager was part of the golden generation that won two back to back cups, so I'm hoping that experience is helping him figure which kids are ready to play at this level.

I have a feeling we'll match up with the hosts New Zealand in the first knockout rounds which we should be able to advance from. It will likely be Brazil in the following round which would be the best challenge and a nice rematch to the recent U20 world cup final. Here's hoping these kids can pull it off!

I'm excited about this team. Look very strong and I hope they go far . Some very good skilled players for the future . Finally we developed a real centre forward striker in Andre Silva , since the days of Pauleta. IVO, Martins , rony , ...

I'm excited about this team. Look very strong and I hope they go far . Some very good skilled players for the future . Finally we developed a real centre forward striker in Andre Silva , since the days of Pauleta. IVO, Martins , rony , the centre back (nunes) etc etc ....all .impressive . Too bad the pit bull, Estreilla is hurt. Start a new Golden age. Forca Guys !