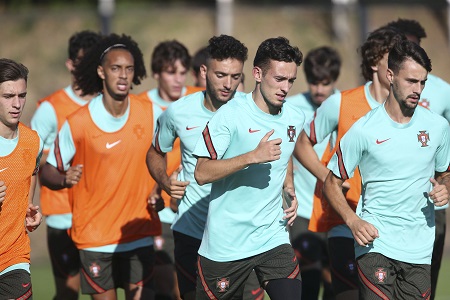 It’s a new era for the Esperanças with qualification for the 2023 UEFA European U21 Championship beginning in Lisbon on Monday. Portugal have been placed in Group D alongside Greece, Iceland, Belarus, Cyprus, and Liechtenstein.

Rui Jorge’s squad for the opening match against Belarus contains some familiar faces alongside three players yet to make their mark on the international stage.

There is still a healthy representation of players who were part of Porto’s successful 2018/19 UEFA Youth League squad. Jorge has selected a trio of players who are representing Tondela.

PortuGOAL's Matthew Marshall breaks down the squad before the opening match.

Rui Jorge’s first squad contains a majority of players that have represented Portugal at various youth levels. Three players have yet to receive an international cap - João Gonçalves, Jota Gonçalves and Tomás Händel.

Players born on or after 1 January 2000 are eligible to participate.

Let’s break the squad down and attempt to predict what Rui Jorge is likely to do on Monday and throughout the campaign.

With Diogo Costa, Luís Maximiano and João Virgínia all ineligible, it’s a completely new trio of goalkeepers. João Gonçalves is probably making up the numbers with Celton Biai, who earned 15 caps for the U19 side, likely to start ahead of João Monteiro.

It’s over for the Diogo Leite and Diogo Queirós partnership which dominated Portugal’s central defence for years.

Eduardo Quaresma’s loan move to Tondela means that Rui Jorge has the option of starting him next to club teammate Jota Gonçalves, but Tiago Djaló is overdue for a chance at this level and is the logical choice to partner Quaresma.

Tomás Araújo is unlikely to see much game time.

Rui Jorge had issues at left back at the 2021 European U21 Championship, but Nuno Tavares’ move to Arsenal means he is the undisputed starter ahead of Tiago Araújo.

Diogo Dalot and Thierry Correia will be hard to replace, but Rui Jorge has two decent options with João Mário and Tomás Tavares part of the previous squad.

I expect Mário to start ahead of Tavares who is lacking match fitness.

Florentino Luis and Daniel Bragança have been replaced by Tiago Dantas and Tomás Händel.

Benfica's Dantas is back in Portugal after a loan spell at Bayern Munich. Currently on loan at Tondela and playing alongside Eduardo Quaresma and Jota Gonçalves, he is an option for Rui Jorge.

Händel has started the last two games for Vitória Guimarães, performed well and could start. 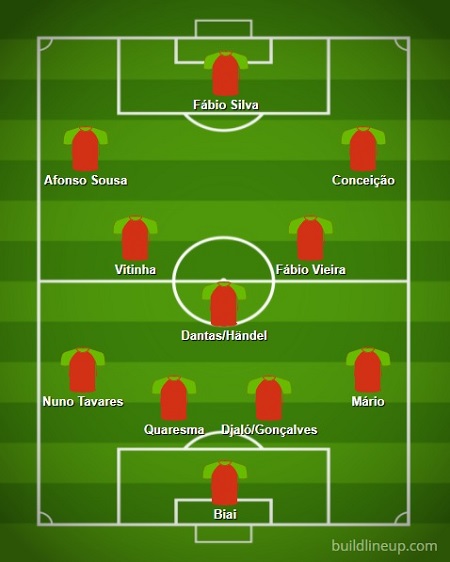 Gedson Fernandes moves on but Rui Jorge is blessed with an abundance of talent in the middle of the pitch.

Vítor Ferreira and Fábio Vieira are certain starters which is great news for Portugal supporters. Next in line are André Almeida, Afonso Sousa and Paulo Bernardo.

Romário Baró, who recently joined Estoril on loan, is eligible but wasn’t called up.

Francisco Trincão and Jota were influential players at youth level for over five years.

Their departures will allow Francisco Conceição to shine. The 18-year-old impressed off the bench in the previous campaign, and I will be keeping a close eye on him to see how he develops.

Afonso Sousa is starting for Belenenses in a deeper role, but has plenty of experience playing on the left wing where he could start on Monday.

Gonçalo Borges will probably be an option off the bench.

Dany Mota moves on with Gonçalo Ramos and Tiago Tomás joined by Fábio Silva. That’s great news for the Esperanças with the Wolverhampton striker yet to represent Portugal at U21 level.

Henrique Araújo could struggle to see much playing time.

João Mário, Vitinha, Fábio Vieira, Fábio Silva, Afonso Sousa and Gonçalo Borges were all part of that squad and the familiarity is sure to be beneficial. Romário Baró was another player in the squad and is expected to be called up at some stage.

Tondela are not used to providing many players for Portugal, but with Eduardo Quaresma and Tiago Dantas on loan with the Auriverdes and Jota Gonçalves becoming a starter, it’s not inconceivable that all three could be on the pitch.

Vítor Ferreira, who became a father for the first time on Wednesday - “It's a new generation. We need to create routines, new dynamics and we need to know what Rui Jorge wants from us.

Our work has been very positive. On Monday, we will certainly be ready to face Belarus at full strength.”

Eduardo Quaresma - “I think that playing with Jota Gonçalves at Tondela will not influence the choice of Rui Jorge here. We have four central defenders.

I have good chemistry with Jota, but I also have it with Tomás Araújo, who was always my colleague in the national team. The only one I haven't played with is Tiago Djaló, who is also a fantastic centre-back.

I think that, regardless of who is chosen to play, we will be prepared and have good chemistry”.

Fábio Vieira - “It is a different and young group, with many changes, but very strong in quality. We are all ready to assimilate the ideas that Rui Jorge wants, so that we can enter the qualification in the best possible way. We have everything to form a great team”.

Tiago Tomás - “Being a striker, it's always a goal for me to score. I haven't been able to do it here yet, but I want to do it as soon as possible. We are all motivated for this game and we get along very well”.

Tomás Tavares - “It is positive to learn to play in different systems and in different positions. This makes us obligated to have other answers to the challenges we face. I have no preference for any structure, I feel comfortable in a line of 3 or 4 defenders, on the right or on the left.

We have been focused on getting to know each other better and creating dynamics, as we have a new group. I think we are working well, we are creating our connections and the intention is to express our quality. I think we will be able to do it”.