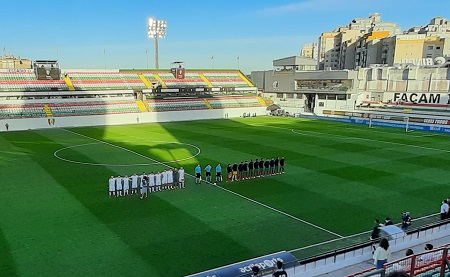 Portugal beat Belarus 1-0 in their opening 2023 UEFA European U21 Championship qualifier at Estádio José Gomes in Amadora. Fábio Vieira’s 32nd minute penalty was the difference in a match the Esperanças dominated from start to finish.

Rui Jorge selected a 4-3-1-2 formation with Vieira in the playmaker position. João Gonçalves and Tomás Händel got their first starts for Portugal with Fábio Silva partnering Gonçalo Ramos up front.

Portugal didn’t take long to establish their superiority with Fábio Vieira’s shot tipped over the bar. Vladislav Lozhkin’s shot from a tight angle was punched away by João Gonçalves but Belarus were soon on the back foot.

Vieira sent a free kick straight at Artem Makavchik after Gonçalo Ramos was fouled, Mário going on a great run which ended a Nuno Tavares shot that was blocked.

Silva’s shot seemed destined for the bottom corner before it was intercepted and Ramos shot wide as Portugal maintained the pressure. André Almeida forced a save from Makavchik with Silva’s follow up sailing wide.

The breakthrough finally came in the 32nd minute. Fábio Vieira was the architect, going on a solo run before finding Almeida who was fouled in the 18-yard-box. Vieira stepped up and buried the penalty into the bottom corner.

Chances were hard to come by for the duration of the first half, Almeida’s cross finding Ramos who saw his header saved.

The second half began with Portugal camping themselves in Belarus’ half. Vieria found Fábio Silva who couldn’t generate enough power to trouble Makavchik.

In the 58th minute Rui Jorge introduced Gonçalo Borges and Francisco Conceição for Tomás Händel and Fábio Silva. The formation switched to a 4-3-3 with Vitinha moving into the holding midfield role.

Conceição was immediately involved, beating his man and driving to the goal line with his dangerous cross intercepted. Tavares went on a mazy run through the middle of the pitch, beating two players before his shot was deflected over the bar.

Borges was enjoying plenty of space on the left wing but couldn’t capitalize.

Belarus appeared out of ideas, but Valeri Bocherov fashioned a chance with Portugal’s narrow lead suddenly a concern.

Tavares went on another run which resulted in Bernardo’s shot being blocked. Tiago Djaló headed Dantas’ corner wide before Borges failed to release Conceição who was in on goal.

Belarus had to go for broke as Daniil Miroshnikov shot over from distance.

Vitinha’s long range effort was tipped over the bar but the action soon returned to the other end. Eduardo Quaresma intercepted a dangerous cross before Aleksandr Shestyuk headed the resulting corner wide.

The match concluded with Conceição leaving Yaroslav Oreshkevich in his wake, the ball falling to Ramos who missed by a narrow margin.

Boavista goalkeeper João Gonçalves got the start in his first international appearance. He had little to do but was secure and will have gained plenty of confidence after keeping a clean sheet.

Eduardo Quaresma and Tiago Djaló need time to build up a relationship, as do many players in the current squad.

Nuno Tavares played some poor passes in the first half but grew into the game and became involved in the attacking third in the second half. He is extremely fast.

João Mário did a lot of good work linking up with the attack in the first half, but there is work to do on the defensive end. Was caught out on a few occasions which left the right flank exposed.

Tomás Händel got the start in the holding midfield role and impressed. With two games for Vitória Guimarães under his belt, it was significant that he was asked to join Rui Jorge in the post-match press conference. Jorge highlighted Händel’s intelligence and it seems clear that he will play a prominent role in the qualification campaign.

André Almeida and Vitinha had solid games, but as president of the Fábio Vieira fan club, I have a duty to highlight Portugal’s main protagonist.

Those familiar with my work covering the U21 side will know all about Vieira. His performance against Belarus was further proof that he is clearly Portugal’s best and most influential player. The 4-3-1-2 formation allows Vieira to shine.

Gonçalo Ramos went close to scoring and didn’t do much wrong. I was excited to see Fábio Silva for the first time and his class is obvious. What isn’t so obvious is the exemplary attitude he brings to the table and that professionalism is sure to rub off on his teammates.

Paulo Bernardo didn’t have much time to impress but showed he could be a useful player off the bench. Tiago Dantas displayed confidence and class in a box to box role.

Francisco Conceição came off the bench and immediately made an impact. The Porto winger has a great ability to drop the shoulder, beat his marker and was unlucky not to register an assist.

Gonçalo Borges saw plenty of the ball on the left wing but failed to do much with it. An alarming passage of play saw Borges fail to see Conceição who was completely unmarked and in position to score.

Rui Jorge’s switch from a 4-3-1-2 to a 4-3-3 didn’t make much difference due to the changes in midfield that destabilised the team. Jorge admitted he was unhappy with some aspects of the performance and acknowledged that there is a long way to go for his new squad.