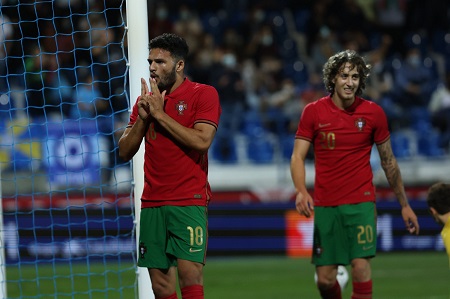 Portugal showed Liechtenstein no mercy in the 2023 UEFA European U21 Championship qualifiers, dishing out a record breaking 11-0 thrashing at Estádio Do Vizela.

The game was over at half-time with the Esperanças establishing a 9-0 lead, the second half unable to match the ferociousness of the opening 45 minutes as substitutions stifled their rhythm.

Portugal took the lead in the 4th minute, Fábio Silva finding Nuno Tavares unmarked in the 18-yard-box with the left-back firing a fierce shot past Gabriel Foser.

Four minutes later it was 2-0, João Mário’s cross falling to André Almeida who took a touch before smashing the ball into the top corner.

Portugal’s full-backs were enjoying plenty of open space with Liechtenstein’s back five sitting deep and narrow.

Tiago Dantas’ ball over the top found Fábio Silva who failed to connect with a bicycle kick, but the near capacity crowd didn’t have to wait long for the third goal.

Fábio Vieira picked out Silva with a sensational pass, the Wolverhampton striker producing a lovely touch and low cross that provided Gonçalo Ramos with an easy tap in.

A minute later it was 4-0. From Liechtenstein’s kick off, Elias Jäger's horrible back pass allowed Silva to pounce and beat Jonas Hilti before dinking the ball over Foser.

Portugal were persisting with balls over Liechtenstein’s defence and it continued to produce results.

Dantas’ ball over the top found Ramos, his looping header close to Foser who got a touch but was unable to prevent Portugal’s fifth goal. In the 24th minute it was 6-0.

Almeida’s cross to Ramos saw the Benfica striker smash a volley off the bar, Mário’s header was spilled by Foser with Ramos on hand to complete his hat-trick with another tap in.

Silva headed off the bar before Hilti was penalised for handball, Vieira stepping up and making no mistake to make it 7-0.

If Liechtenstein thought they could hold on until half-time, they were sorely mistaken as Portugal kept their foot on the gas and scored two more goals.

It was Ramos again, meeting Mário’s cross with an acrobatic shot that bounced over Foser. A minute before the break Silva made it 9-0, rising high to head Tavares’ cross into the back of the net.

Fabio Vieira picked up a knock and was soon replaced by Afonso Sousa, the Belenenses attacking midfielder providing a pinpoint cross for Tomás who headed into the bottom corner.

Foser managed to make some important saves from Henrique Araújo and Tomás, but he couldn’t stop Conceição who surged through two defenders before finishing into the bottom corner.

Portugal continued to create chances, but couldn't get past Foser who finished strong after enduring an eventful evening in Vizela.

In the build up to the match, Rui Jorge highlighted some of the difficulties Portugal often face when playing against far inferior opponents. "There will be a large amount of players in the area and this always brings difficulties. Mainly up to the first goal."

He needn’t have worried. In the end there were no difficulties whatsoever, and it only took Portugal four minutes to break the deadlock which opened the floodgates.

The quality of opposition is always a major consideration when assessing such one-sided contests, but Portugal deserve praise for some of their goals which were simply outstanding.

Jorge highlighted the quality of football in the first half. "Many of the things we did in the first half seemed simple, but the execution is not easy. Finding those spaces, which are few, is something quite difficult. Only high level players can find these spaces."

Liechtenstein were dissected with surgical precision in the opening 45 minutes, crosses from out wide and balls over the defence constantly finding Fábio Silva and Gonçalo Ramos who overwhelmed the visitors.

Portugal pressed relentlessly and were not interested in showing the minnows any mercy, merely inflicting as much damage as possible upon a side that were outclassed in every facet of football.

What’s noticeable about the current U21 squad is high quality attitude and desire across the board. Jorge constantly talks about the behavior of his players just as much as their footballing ability.

He was full of praise for the attitude of his players in Vizela. "The players behaved very well. When the gap is very big, I always fear that there is behavior that is not adequate, but this was far from happening. The posture was brilliant and I'm very proud."

The last word goes to the 5239 spectators in attendance, the first time we have seen a stadium in Portugal close to capacity since the beginning of the COVID-19 pandemic.

They created a great atmosphere, giving Celton Biai a huge round of applause every time he touched the ball and showing appreciation for the Liechtenstein players who battled hard in the second half.

Rui Jorge made two changes to the side that beat Belarus 1-0 in Amadora, Celton Biai replacing João Gonçalves in goal and Tiago Dantas replacing Tomás Händel in defensive midfield.

WHOLLY smokes, I mean I know its Liechtenstein but the senior team couldn't hit 11 goals. Is it that these players are that much better or is it that there is decent coach that knows attacking football?

I'm gonna say coach. You are welcome to...

WHOLLY smokes, I mean I know its Liechtenstein but the senior team couldn't hit 11 goals. Is it that these players are that much better or is it that there is decent coach that knows attacking football?

I'm gonna say coach. You are welcome to debate me on this.

Cheer up man At least we'll still get to watch Ronaldo score a penalty and the Qatarian keeper deflect a goal into his own net. Formations and tactics are meant to be exploited but you can never exploit luck.

SupremoGino
There are no comments posted here yet