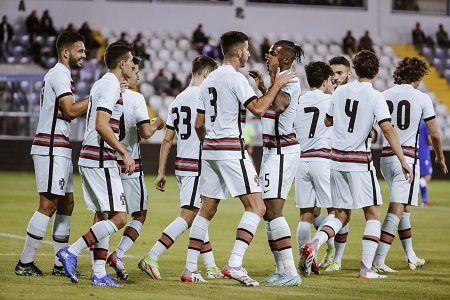 Rui Jorge was absent in Larnaca after testing positive for corona virus. Romeu Almeida stepped up to the plate with Gonçalo Inácio making his U21 debut, starting in central defence next to former Sporting CP teammate Eduardo Quaresma.

The Esperanças steadied themselves and took the lead in the 15th minute. André Almeida won possession and drove forward, releasing Gonçalo Ramos who fired a first time finish past Stephanos Kittos.

The visitors began to threaten with regularity, Fábio Silva seeing his header cleared off the line before Ramos and Vieira tested Kittos with headed efforts. Ramos was becoming increasingly involved, heading wide before collecting a long ball from Tiago Dantas with Andreas Katsantonis producing a vital last-ditch challenge.

The hosts went close to equalizing in the 52nd minute. A dangerous free kick saw Thomas Nicolaou shoot at Biai who spilled the ball, Dantas on hand to clear the danger.

Cruise to the finish line

Portugal soon regained control and dominated the rest of the match. Fábio Silva produced two weak shots that were comfortably saved before Fábio Vieira missed a great chance to seal the deal.

Vitinha went on a great solo run through the middle of the park, beating four players before finding Vieira who shot straight at Kittos.

It was another tough road trip for Portugal, but once again they passed the test and made their superiority count. Rui Jorge’s starting side basically picks itself which is a great sign so early into a long campaign.

Gonçalo Inácio finally got his chance at U21 level at the expense of Tiago Djaló who was absent. Inácio came through the Sporting CP youth academy alongside Eduardo Quaresma, and that familiarity could be an important factor for Rui Jorge moving forward.

Chiquinho made his U21 debut off the bench, was stationed on the right wing for the final 24 minutes and failed to make any real impact.