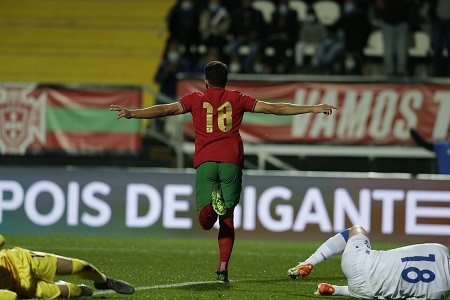 Portugal beat Cyprus 6-0 Estádio de São Lúis to make it five straight wins in the 2023 Euro U21 qualifiers. It was a comfortable victory with Gonçalo Ramos hitting another hat-trick and the visitors rarely threatening to score.

Ramos got the ball rolling in the 6th minute, Gonçalo Inácio doubling the advantage before Fábio Silva saw his penalty saved. Portugal scored four goals in a lethal 19 minute spell in the second half.

Fábio Vieira converted a free kick, Ramos scoring twice to complete his hat-trick and Henrique Araújo grabbing a goal off the bench. Portugoal's Matthew Marshall was in Faro to see Portugal's victory which sees them remain one point ahead of Greece in Group 4 with a game in hand.

Portugal dominated the opening exchanges and required just six minutes to take the lead. Fábio Vieira’s dangerous ball into the box fell to Gonçalo Ramos, the Benfica striker sensing the danger and smashing it in off the post.

Cyprus fashioned their best chance of the half in the 20th minute. Konstrantinos Sergiou’s cross found Michalis Ioannou, his shot from the penalty spot weak and straight at Celton Biai.

It would prove to be a costly miss. Less than a minute later Portugal doubled their lead, Vieira’s corner met by Gonçalo Inácio who headed the ball past Stefanos Kittos.

Fábio Silva started to get involved in the game, seeing his penalty claim waved away before being gifted a great chance to score. Afonso Sousa was taken out by Ioannou, Silva stepping up and seeing his penalty saved by Stefanos Kittos.

Portugal finished the first half strong, Silva’s shot from a tight angle saved before a Nuno Tavares cross was met by Ramos, his deft flick saved by Kittos. João Mário picked up an injury and was replaced by Tomás Tavares in the 50th minute.

A minute later Portugal extended their lead, Fábio Silva was fouled with Vieira stepping up and executing a perfect free kick past Kittos. It signaled the start of a fantastic spell of football which saw the Esperanças score four goals in 19 minutes.

Vieira released Gonçalo Ramos, the in-form striker beating Kittos from a tight angle. Seven minutes later he completed his hat-trick, Tomás Tavares’ cross taking a deflection off Afonso Sousa with Ramos getting to the ball first and dinking it over Kittos.

Romeu Almeida made a triple switch in the 62nd minute with Vitinha, Fábio Silva and Gonçalo Ramos replaced by Tomás Händel, Henrique Araújo and Vítor Oliveira.

Nuno Tavares made way for Tiago Araújo in the 72nd minute before the home side fashioned another great chance. Vieira threaded the needle, picking out Vitor Oliveira who saw his shot saved.

Celton Biai was a virtual spectator in the second half but was alert in saving a fierce strike from Andreas Katsantonis. Once again it was a false dawn, Portugal immediately regaining control in the closing stages.

Tiago Dantas fired into the side netting after a great team move, Henrique Araújo with a shot saved and Vitor Oliveira firing the follow up wide.

Gonçalo Ramos found himself behind Dany Mota in the previous version of the U21 side, but he is now starting regularly, making it count and outshining Fábio Silva.

Ramos scored a superb goal to open the floodgates in Faro, finished from a tight angle for his second before showing great anticipation and execution to secure his second hat-trick of the campaign.

The Benfica striker is full of confidence, scored four goals in the 11-0 rout against Liechtenstein and has now scored eight goals in his previous four games for the Esperanças.

Portugal's U21 side continues to go from strength to strength. I firmly believe this squad has more depth and is superior to the one that reached the 2021 European U21 Championship final.

Gonçalo Inácio gives Rui Jorge a high quality option in central defence and Nuno Tavares is gaining plenty of confidence since his move to Arsenal. Afonso Sousa started with André Almeida and Paulo Bernardo unavailable, got into the game and provided two assists in the second half.

Vitinha continues to be a consistent performer and Fábio Vieira was back to his best in Faro, setting up three goals and scoring a superb free kick from distance.

Portugal have some time off before the next qualifier which will be a home game against Iceland on 24 March. They are yet to play Greece who sit one point behind in Group 4 having played an extra match.

Gonçalo Inácio continued next to Eduardo Quaresma with Tiago Djaló unavailable. Midfielders André Almeida and Paulo Bernardo were out which saw Afonso Sousa get his first start of the campaign.

Will
This comment was minimized by the moderator on the site

Portugal needs Fabio Viera to play for the major team.

Not another Santos, he will become a crap player and only play half hearted defense. Let him have fun, and realize that offensive strategy has a role in soccer.

Paulo
There are no comments posted here yet