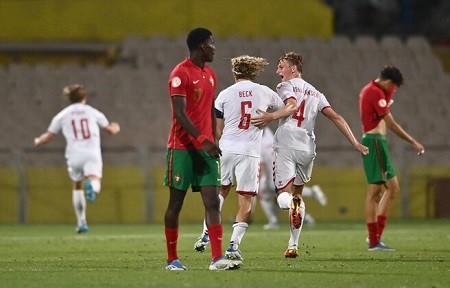 Portugal suffered a 3-1 defeat against Denmark in Ramat Gan, surrendering top spot in Group D at the U17 European Championship. Ivan Lima opened the scoring in the 30th minute as the Equipa das Quinas took a 1-0 lead into half time.

The Danes fought back strong however, Noah Nartey equalising in the 60th minute and Elias Hansborg-Sørensen putting them ahead 10 minutes later. The killer blow was dealt in the 90th minute when Luís Gomes’ bundled a free kick into his own net.

The defeat comes at a cost as Portugal will now face tournament favourites Spain in the quarter-finals.

Denmark started the stronger side in Ramat Gan, knocking the ball around nicely and monopolising possession. Noah Sahsah had the first decent chance of the game, turning and shooting from close range with Diogo Fernandes making the save.

Portugal’s first effort came in the 20th minute when Ivan Lima burst down the left wing, his cross falling to Dinis Rodrigues whose shot was tipped wide by Theo Sander.

It's the Ivan Lima show

The Equipa das Quinas started to get a foothold in the match with everything coming through Lima. He went on another dangerous run, teeing up Rafael Luis who couldn’t generate enough power to trouble Sander.

Portugal were rewarded in the 30th minute and the route to goal was no surprise. Leonardo Barroso intercepted the ball and delivered a pinpoint pass that released Lima, the winger surging past Gustav Fraulo and firing into the net from a tight angle.

Denmark finished the first half strong with Noah Nartey blazing the over the bar and Hansborg-Sørensen missing the target. Hansborg-Sørensen was proving a real handful for João Conceição, winning the individual battle and being afforded far too much time and space.

Portugal were fortunate not to concede a penalty at the start of the second half when João Veloso went down and handled the ball on the edge of the 18-yard box. Denmark were showing plenty of enterprise up front, but it was their goalkeeper who kept then in the contest.

Two chances fell to Rodrigo Ribeiro in the space of two minutes. He headed Leonardo Barroso’s cross over the bar before looking certain to score in the 61st minute, meeting Ivan Lima’s cross with a volley that produced a fantastic save from Sander.

It was the turning point in the game with Denmark equalising less than two minutes later. Noah Sahsah was too big and strong for Barroso, winning the ball near the byline before his cross picked out Noah Nartey who converted from close range.

Portugal continued to spurn opportunities. Rafael Luis released Semedo who cut inside, but with better options available he chose to shoot with his effort blocked by a determind Danish defence.

Denmark continued to threaten and took the lead in the 70th minute. Emil Højlund did well to direct the ball into the path of Hansborg-Sørensen, the winger holding off Conceição and beating Fernandes.

Afonso Moreira was doing his best to get Portugal back into the game, rampaging down the right wing and looking likely to instigate an opening. Semedo saw another shot blocked before José Lima introduced João Gonçalves for Rafael Luís.

Portugal had a great chance to equalise in the 84th minute when Lima sent Semedo through on goal, but the young striker couldn’t beat Sander who made another important save.

Denmark should have put the game to bed in the 86th minute. Once again it was Sahsah outmuscling Barroso, teeing up Hansborg-Sørensen who looked certain to score before Fernandes diverted the ball over the bar.

José Lima attempted to bring Ussumane Djaló off the bench, but his hesitancy cost his team who went 3-1 behind in the 90th minute. Andreasen’s free kick caused confusion in the six-yard box, Luís Gomes diverting the ball into his own net in a disappointing end to the contest.

Portugal only needed a draw against Denmark which would have preserved top spot in Group D and set up a quarter-final clash against Serbia. The defeat means Portugal will face tournament favourites Spain in Netanya on Thursday.

‘La Rojita’ started their campaign with successive 2-0 wins against Turkey and Belgium. They were 1-0 up in their final group game against Serbia before a late penalty saw Serbia earn a crucial point to sneak into the quarter-finals.

Germany and Italy have kept two clean sheets at the tournament, both coming against Luxembourg and Israel in Group A. France have kept one clean sheet, a 4-0 win against Bulgaria in Group B.

With Portugal unable to keep a clean sheet and conceding six goals in the process, their defence obviously has some issues which could be a real problem with superior sides lying in wait.

José Lima was unable to travel to Israel with his team after testing positive for covid, Portugal’s manager arriving after the 5-1 win against Scotland.

His first 15 minutes in charge at the tournament was a complete disaster, Portugal seemingly operating without a midfield as Sweden took charge and opened the scoring. It was an alarming tactical error, covered up by the superiority of his side who turned it around to secure a 4-2 victory. 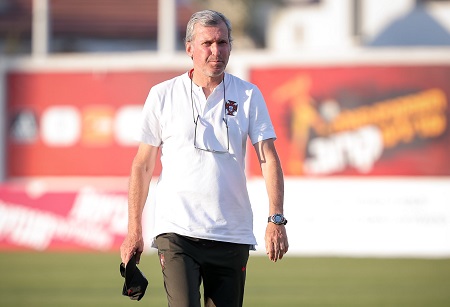 His confusing comments to Canal 11 before the clash against Denmark sent a mixed message: “The objective is to win, but clearly if we can't win, we can't lose either. But, I reinforce, the objective is clearly to win”.

Lima brought Afonso Moreira and Vivaldo Semedo into the contest the 66th minute which made perfect sense, but he waited eight minutes after Denmark took a 2-1 lead to replace Rafael Luís with João Gonçalves.

Lima prepared to introduce Ussumane Djaló in the closing stages, but his hesitancy meant that Djaló, arguably man of the match against Sweden, was standing on the touchline for many minutes, during which Denmark made it 3-1 to end the contest. Djaló running onto the pitch with his team 3-1 down in the 90th minute was an embarrasing moment for the manager.