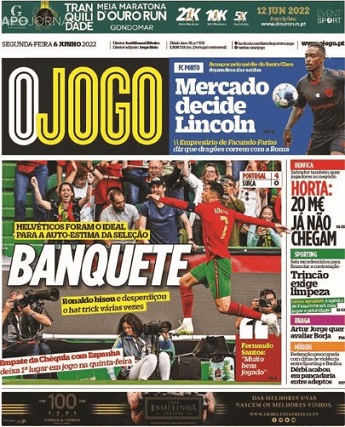 “BANQUET!” was the appropriate headline in O Jogo on Monday morning after Portugal had given their fans a performance to feast on against Switzerland.

The 4-0 thumping and festival of attacking football was widely considered the best display by the Seleção since Fernando Santos was appointed head coach way back in 2014.

Tonight, at the same Alvalade venue in Lisbon, Portugal will be hoping for a repeat performance against the Czech Republic. Another victory will put Santos’s team in poll position to win their Nations League group at the halfway stage.

Just as significant, another convincing exhibition will further excite fans and boost optimism that Portugal can go far in the Qatar World Cup later this year.

Fernando Santos made six changes for the Switzerland match after the 1-1 draw versus Spain three days prior, but he is unlikely to rotate the team to such an extent again.

Firstly, with almost all the players putting in a vibrant shift, it will be tempting to consolidate the XI and try to maintain the cohesion and dynamism. Secondly, as Santos said in the post-match interview, the extra day of recovery time makes all the difference. “Changes? Let’s see. We have four days to recover; 96 hours to recover is completely different from 72 hours.”

A common topic of discussion in the Portuguese media is the seeming incompatibility between Bernardo Silva and Bruno Fernandes in Portugal’s midfield. No-one questions the world-class status of both players, but they have failed to fire together when wearing a Seleção shirt. On Sunday, Bernardo started on the bench, coming on for Bruno in the 67th minute. Was Portugal’s superb performance linked to the fact only one of their creative midfield diamonds was on the pitch? The energy and industry provided by less heralded names such as William, Rúben Neves and Otávio appears to give the team a better balance.

The match will mark the 100th Portugal game with Fernando Santos as head coach. The veteran manager was all but canonised after guiding his nation to their first ever major trophy at Euro 2016, and he followed it up by guiding Portugal to more silverware as the inaugural Nations League victors in 2019. Despite fierce criticism in recent years for a perceived overly conservative style of play, Santos retains the firm support of the FPF and the players. Asked which game sticks most in the memory, somewhat surprisingly, it was not a certain match in Paris.

“The first one,” Santos replied. “Being at the head of the national team of my country… it was an emotional moment. I’ve got an elephant’s memory, but I couldn’t even sing the national anthem.”

Portugal’s opponents will also be coming into the match with morale high. Considered outsiders in League A Group 2 at the outset, the Czech Republic have four points from their first two matches, like Portugal. And it could have been even better. The Czechs were denied victory over Spain by a last-minute equaliser in Prague.

Jaroslav Silhavy, Czech Republic coach: “We won’t make many changes. Portugal are a very good team, but we don’t just want to defend. We showed against Spain that we can be dangerous on the break.”

The two nations have only met three times previously, all in tournament play at European Championships. The Czechs won the first encounter thanks to Karel Poborsky’s famous lob over Vítor Baía on their way to the Euro 1996 final. Portugal exacted revenge in the subsequent two occasions however, with victories at Euro 2008 and Euro 2012, with Cristiano Ronaldo finding the net in both matches.

johnieoooo
This comment was minimized by the moderator on the site

Diogo Costa, Duarte, Guerreiro and either guedes or leao might start (btw watch the goal scored by Guedes against Osasuna). I expect the squad to be heavily rotated for one of the last two matches

If I were there Coach, I would do as little rotation as possible. Of course I would consider if they might be more defensive, and adapt based on that.

I would want to build on the great performance against the Swiss.

I would put Diego back in...

If I were there Coach, I would do as little rotation as possible. Of course I would consider if they might be more defensive, and adapt based on that.

I would want to build on the great performance against the Swiss.

I would put Diego back in goal.

Save the rotations for the upcoming Swiss game.

Read More
Paulo
There are no comments posted here yet