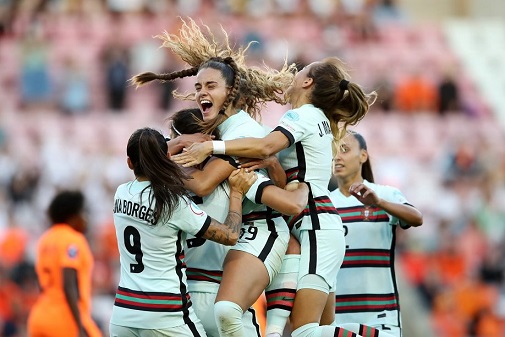 Playing only their second major tournament, Portugal women continued their upward trajectory with several positive moments at the European Championship, currently being played in England.

A comeback draw against Switzerland and a narrow defeat against one of the best women’s teams in the world, the Netherlands, provided further evidence that female football is making big strides in Portugal. However, the Seleção’s campaign came to an abrupt end on Sunday as a heavy defeat to Sweden ended hopes of making the knockout phase of the competition.

The female Seleção were the last team to qualify for the tournament when Russia were kicked out as part of the sanctions for the country’s invasion of Ukraine. Portugal were placed in an extremely tough group, containing current European champions the Netherlands, and Europe’s top-ranked team and no. 2 in the world rankings Sweden.

The women’s Euro 2022 tomorrow reaches the quarter-final stage, with England, France and Germany most impressing thus far. To have a flutter on who will be the outright winner, online betting sites offer odds on the tournament victors.

Portugal had a nightmare start to the tournament, finding themselves two goals down after just five minutes as Coumba Sow and Rahel Kiwic found the back of the net early on for the Swiss. To their credit, Francisco Neto’s team did not buckle and gradually worked their way back into the game.

The Seleção were transformed in the second 45 minutes, and two quickfire goals from Diana Gomes and Jéssica Silva levelled the match with 25 minutes remaining. Portugal swept forward in search of the winning goal. Several chances came and went with Telma Encarnação desperately unlucky to see her low firm shot from long range bounce back off the post in the closing minutes.

Once again the Seleção started poorly, and when Damaris Egurrola and Stafanie van der Gragt put the Dutch two goals up by the 17th minute you feared the worse for Portugal.

However, once again the Luso women showed tremendous character and no little skill as Carole Costa pulled a goal back from the penalty spot after Diana Silva had been tripped in the box, then Diana herself headed in an equaliser at the start of the second half. Portugal were only undone by a magnificent Danielle van de Donk strike in the 62nd minute, but given the calibre of opposition and the fact the Seleção matched the reigning European champions for long periods, this match has to go down as one of Portugal women’s best in their history.

Portugal went into their final Group C match with hopes of making the quarter-finals still alive given the quality of their first two displays and the fact Sweden had not impressed thus far. Unfortunately, the Swedes chose the game against the Seleção to shine, completely outplaying the Portuguese from start to finish.

A brace from Filippa Aggeldal, goals from Kosovare Asllani (penalty) and Stina Blackstenius and an own goal by Carole Costa saw Sweden run out 5-0 winners.

It may seem strange to conclude that Euro 2022 was a positive experience for Portugal having finished bottom of Group C, but the female Seleção showed lengthy periods of high-quality football in the tournament, scoring 4 goals and giving the Netherlands a real run for their money.

Two of Portugal’s star players Jéssica Silva and Diana Silva lived up to their billing, the latter especially impressive with her intelligent positional play and sense of opportunity to frequently cause danger to the opposition. Francisca “Kika” Nazareth at just 19 years of age was another player who really shone when given the chance, her ability to keep hold of possession and superb passing range coming to the fore.

Andreia Norton and Diana Gomes also showed flashes of excellence which will give Portugal optimism that they can continue to make progress.

It cannot be ignored though, that Portugal women have not yet worked out how to overcome their physical and height disadvantage when facing most of the top opposition teams. The Seleção conceded multiple times from set pieces, with neither goalkeeper (Inês Pereira and Patrícia Morais) distinguishing themselves when it came to dealing with crosses, although both did well at shot-stopping.

Coach Francisco Neto is well aware of the problem, saying after the Sweden game: “We started the game well, but at set pieces we are not competitive. We defended well during open play, we did not concede any goals from Sweden attacks, only on set pieces and once in a transition. But at this level they all count and it was very difficult for us to block Sweden’s set pieces.”

Neto and the rest of his staff will not be too downhearted and will be hoping the increased FPF investment and interest in women’s football in Portugal over recent years will bear fruits in terms of continuous improvement in the national team’s performances and results.

“The big lesson we take from the tournament is that we are more capable than we were in the past. But of course, we are disappointed. We deserved to win the first game against Switzerland, we could have drawn the second, and today, Sweden were better than us.

“For those looking at the stats alone, they may think it was far from brilliant, but those who watched the games carefully will be proud of our players.”

I watched all the games. Going forward we have improved massively since the last Euros but defensively we were very short. Any corner conceded felt like it was a 50% of being a goal. Despite going 2.0 down in both of the first two games, I felt...

I watched all the games. Going forward we have improved massively since the last Euros but defensively we were very short. Any corner conceded felt like it was a 50% of being a goal. Despite going 2.0 down in both of the first two games, I felt disappointed not to have taken 4 points as we had the chances to complete the come back and beat the Swiss and could have held out for a draw against the Netherlands. Sweden gave us no chance sadly.

We suffer from a lack of height so we need to address that one way or another if we want to take the next step and start challenging better nations. I hope it happens. The girls played some fantastic football at times and you can see the potential is there. We need Porto, Guimaraes and some of the other established clubs in the Liga to form female teams to increase the competitiveness of the league.

BJRMB
This comment was minimized by the moderator on the site

BJRMB
There are no comments posted here yet