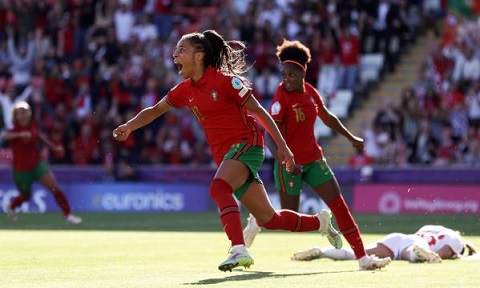 Jéssica Silva’s leveller guaranteed the skirmish of the Group C longshots finished all square as Portugal came back from 2-0 down against Switzerland to take a point.

Following early strikes by Coumba Sow and Rahel Kiwic inside the initial five minutes at Leigh Sports Village, Francisco Neto’s side, who qualified for the finals because of Russia’s removal, hit back through Diana Gomes and Silva to guarantee a 2-2 draw.

They could have taken all three points had substitute Telma Encarnacao not been denied by a post at the end of the game.

With reigning champions Netherlands and Sweden to come, that may not be sufficient to advance with the two squads knowing before start off the game it was basically a must-win issue.

Switzerland, who had captain Lia Walti winning her 100th cap, got off to a fantastic start when just a few moments after the kick off Sow hooked on to a free ball 25 yards out and crushed a shot across the scrambling manager Inês Pereira and inside the far post.

Pereira was soon picking up the ball from her again as Kiwic coordinated her run flawlessly to meet Ramona Bachmann’s free-kick and head home.

The shell-stunned Portugal side step by step worked their way back into the game with striker Silva conspicuous, yet they seldom threatened to cut the deficit as the Swiss guard – well-marshalled by Bachmann and Viola Calligaris – held firm with minimal genuine trouble.

Portugal stepped up in the second half and Jéssica Silva looked especially lively upon the restart with a brilliant turn but her run came to nothing. And the Seleção could have been out of it when Bachmann found space on the left but failed to find Ana-Maria Crnogorcevic who was called for a cut-back.

Notwithstanding, Portugal were back in it with 58 minutes gone when, after Swiss guardian Gaelle Thalmann had made a fine save to keep out Gomes’ firm header from an Ana Borges corner, the centre-back bundled the rebound back over the line.

They were level in no less than eight minutes when Silva stretched beyond Calligaris to apply a magnificent finish to Tatiana Pinto’s cross.

Dolores Silva saw a 70th-minute free-kick beaten away by Thalmann and Diana Silva could not make the most of two great attacking opportunities before Switzerland’s Geraldine Reuteler and Sow were denied a victor by the woodwork and full-back Catarina Amado respectively as the game completely opened up.

Telma Encarnação was similarly unlucky not to grab victory for Portugal in the dying minutes when her long-range shot came back off the post.