Portugal break with tradition as World Cup 2022 kits are unveiled 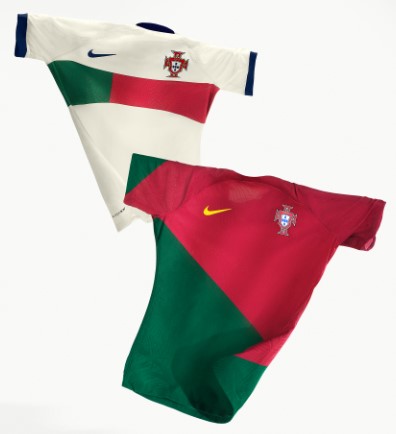 The Portuguese Football Federation today unveiled the kits the Seleção will wear at the FIFA World Cup Qatar 2022.

In a break from the past, the kits are unlike any previous iteration of Portugal’s tournament outfits and will certainly divide opinion amongst the millions of Seleção fans at home and all around the world.

Below is a translation of the blurb explaining the concepts behind the design of the kits, as per the FPF website:

The main Portugal kit contains a contrast between deep and vivacious shades of red and green, evoking the national flag, which represents the country and the Portuguese people.

The diagonal line crossing the chest and the back attempts to portray a Portugal flag wrapped around the footballers, the idea that served as the basis of the new “Wear the Flag” concept that will be present in all communications involving the Portuguese national teams.

The green shorts, extremely popular among the supporters, come back and afford a visual fluidity to this new collection. Another detail is the presence of the armillary sphere on the back collar.

🇵🇹 #WearTheFlag. Inspired by the colors of the Brave Nation, our official kits are now available 👕 #NikeFC pic.twitter.com/yhYsqpejjd

The new second kit of the Seleção is in an off-white shade that stands out from the traditional white shirts, and has a stripe with the same green and red tones of the first kit, which wraps around to the back, maintaining the same idea of the flag around the chest of the Portuguese players.

The presence of blue shades on the sleeves and the collar is an allusion to Portugal’s vast Atlantic coast.

The kits will be used for the first time in the upcoming Nations League matches against the Czech Republic and Spain, the squad for which was announced today by Fernando Santos.

Whatever your opinion of the kits, one thing we can all agree on. May they bring luck to the Seleção!

William
This comment was minimized by the moderator on the site

Love the white one. Classy. Not sure about the main one. Looks like a rugby kit.

So torn on these. I love idea of wear the flag, but the home kit just sits strange. Perhaps it'll grow on me, but I'm not rushing to buy one. The white is sneaky nice, and should feature WAY more of that atlantic blue going forward. Hard to argue...

So torn on these. I love idea of wear the flag, but the home kit just sits strange. Perhaps it'll grow on me, but I'm not rushing to buy one. The white is sneaky nice, and should feature WAY more of that atlantic blue going forward. Hard to argue any kit featuring that color can look bad or has in the past.

Iam sorry but the home jersey looks like a onzie.

Robert Martins
There are no comments posted here yet