Seleção close out 2016 in style 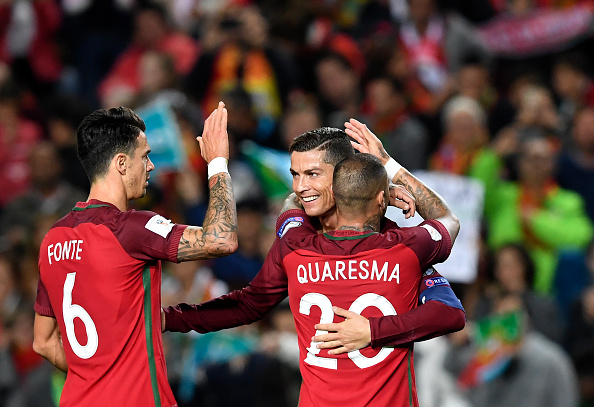 The Seleção finished a remarkable year of football with a 4-1 victory over Latvia at the Estádio Algarve tonight.

Despite a slow start, and an unexpected 67th minute equalizer from the visitors, Portugal piled it on late with William, Ronaldo, and Bruno Alves securing a vital three points in Group B of World Cup 2018 qualification.

Fernando Santos returned to an attack-oriented 4-3-3 by selecting Nani in the starting XI alongside Ronaldo and André Silva after the Valencia man missed the last two World Cup qualifiers due to injury. André Gomes and João Mário kept their places in midfield despite the luxury of options available, including Bernardo Silva, who has 5 goals and 3 assists already for Monaco this season. Meanwhile Bruno Alves returned for the first time since the Euro 2016 semifinal victory over Wales, and Raphael Guerreiro resumed his duties at left back after recovering from a thigh injury suffered in the 6-0 victory over Andorra.

Latvia did well to remain compact in the early stages of the match, and Portugal didn't test Vanins' goal until the 7th minute when João Mário cut in from the left and shot straight into the keeper's midriff. Not to be outdone, the visitors won a corner and Tarasovs tested Rui Patricio with a near post flick that the Sporting keeper did well to hold onto.

Gomes went into the referee's book with a late challenge on Kluskins as Portugal struggled to create openings in the Latvian defence. Ronaldo was next to test Vanins from distance, but his shot lacked sufficient accuracy if not power. Nani skewed a half-volley wide left minutes later after good work by Cancelo and André Gomes down the right wing.

The Valencia winger switched wings with Ronaldo and directed another shot on target in the 23rd minute, but again the effort was easy for Vanins. But Nani's determination finally paid off when he was caught late in the penalty area after being played in by Ronaldo. Portugal's captain struck the ball low and hard past Vanins to put the home side ahead in the 28th minute.

Latvia had conceded both wings to Portugal, but refused to give up the center of the pitch, obligating Portugal to send in hopeful crosses or cut inside and shoot from distance. To their credit, the Latvians had a penalty shout just minutes before the half when Bruno Alves' arm was struck with a shot after he went to ground too early.

The 2nd half began much as the first ended with Portugal pressing hard and Latvia bravely defending. André Gomes was brought down inside the penalty area in the 59th minute, but Ronaldo's spot kick hit the right post then the keeper before bouncing to safety. It had been that type of match for Portugal with the Latvian's physical play interrupting their passing rhthym though it must be said Portugal's crossing was poor.

Santos introduced Quaresma in the 65th minute for Nani, maintaining the 4-3-3 structure. But Latvia were unfazed and made Portugal pay for their lack of urgency. Arturs Zjuzins found himself well positioned to strike a loose ball after a cross came in from Rudnevs on the right. The substitute's effort left Patricio with little chance, drawing the visitors level in the 67th minute, and Santos immediately told Gelson to make ready.

But the panic from the thought of dropping precious points at home was short-lived. In the 70th minute, Quaresma whipped in a cross from the right that William nodded past Vanins, his first goal for Portugal.

Gradually, Latvia's defence began to tire, and a well-worked move through midfield put Quaresma in acres of space down the right wing with five minutes left in the match. The Besiktas winger floated a deep cross that found Cristiano Ronaldo unmarked to lash home a brilliant volley that put the result beyond doubt.

Renato Sanches made his long-awaited return, and just minutes after coming on the Bayern midfielder very nearly found Ronaldo to complete his hat trick. Ronaldo then smashed the crossbar with a header after yet another brilliant cross by Quaresma, who had tormented the left side of the Latvian defence since coming on for Nani.

Bruno Alves padded the scoreline further in stoppage time with a typical header following a cross from Raphael Guerreiro. The result was perhaps a bit unfair to the visitors, who had contained Portugal well until the final 20 minutes of the match. The Seleção were far too languid in their approach, and the 4-3-3 didn't suit the crossing game they were forced to play. In the end it was Quaresma who intelligently exposed the space given him by delivering accurate crosses that found William and Ronaldo for the go-ahead goals.

Ronaldo had another typical performance by his standards, striking the crossbar, missing a penalty, and still scoring twice to bring his career total to 68 goals. Santos will have plenty to ponder in the next 4 months as his player selection conundrum was surely made worse by the brilliant performance of Ricardo Quaresma this evening. André Gomes justified his role in the starting XI with a composed performance alongside William Carvalho, who added another dimension to his game by making himself a target for Quaresma's cross.

Portugal remain in 2nd behind Switzerland on 9 points, and will open up 2017 on March 25th against Hungary.

I'm delighted Bruno Alves played and scored. I have never been able to understand the antipathy for this guy that's shown by most of the correspondents on this site. (Is it this dumb Benfica/Sporting distate for a Porto stalwart?) Alves has...

I'm delighted Bruno Alves played and scored. I have never been able to understand the antipathy for this guy that's shown by most of the correspondents on this site. (Is it this dumb Benfica/Sporting distate for a Porto stalwart?) Alves has been a great servant of the national team whose distribution puts some of his midfield colleagues to shame. I don't have the stats to hand but I reckon he is also the third highest goal scorer (after CR7 and Nani) in the national squad. While I'm on the subject of rescuing reputations, on tonight's evidence (and other performances) I'm not sure that William, Joao Mario and Andre Gomes are any more dynamic or incisive than the Moutinho, Veloso, Meireles combo. Joao Mario reminds me of the famous Spurs midfielder of yesteryear, Vinnie Samways or more accurately Vinnie Sideways (given his inability to move the ball forward). Why start with this "water carrier" when you have Sanches and Bernardo Silva on the bench, I do not know. And why the **** Queresma doesn't start and finish every game is a source of total bafflement to me. He is, quite frankly, still the only player in this squad who comes close to CR7 in terms of world class ability and charisma.