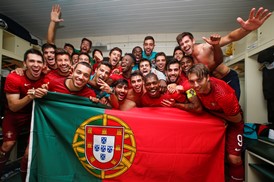 As expected, Portugal U21s booked their place in next year’s European Championship, but not after playing out a remarkable nine-goal thriller in Paços de Ferreira, a 5-4 victory on the day giving the Seleção a 7-4 aggregate victory over the Netherlands in the playoff.

Rui Jorge made one change to his side which won 2-0 in Alkmaar, Tozé replacing Rafa Silva. Adrie Koster understandably shook things up, six players surviving the chop with Kongolo, Brenet, Hupperts, Ola John and Weghorst coming in.

Portugal could have scored immediately as Guerriero’s deep cross was missed by Hahn, but Tozé was unable to head the ball on target. Ricardo Pereira switched to the left side early on and was finding acres of space with Bernardo Silva unable to capitalise.

Sérgio Oliveira played a clever 1-2 with Ricardo, the Captain forcing a free kick on the edge of the area after Brenet’s foul. Tozé’s free kick fell nicely for Rúben Vezo who steered the ball past Hahn to give the host an early lead. 1-0.

It didn’t last long as Portugal fell asleep. Willems’ cross drifted towards the far post where Heracles’ 197cm Wout Weghorst rose above Ruben Neves and headed across José Sá to equalise. From a corner Weghorst headed just over if Portugal needed any reminding of his aerial threat.

Sérgio Oliveira tested Hahn from a free kick before Tozé produced another assist, this time from the corner as Ruben Neves headed past Hahn for 2-1.

Approaching the half hour mark some nice work between Portugal’s attacking trio saw Ricardo’s effort fall to Bernardo Silva, his left footed shot across goal with Ivan Cavaleiro just out of reach.

Elvis Manu continued where he left off in Alkmaar, proving to be a constant threat behind the Portuguese defence. A tangle allowed the fast Feyenoord attacker to race onto the ball, unable to pull the trigger before Ricardo Esgaio came across in cover to force a corner. Manu was at it again shortly after, racing clear and unleashing a shot which Sá saved well.

Just before the break a corner fell to Manu well outside the area, his sweetly hit volley heading into the top corner before Sá produced a world class save. He couldn’t save his team from surrendering their lead before the break however, as Kongolo headed in Ola John’s cross in injury time to make it 2-2.

Carlos Mané replaced Ivan Cavaleiro at half time and Portugal soon capitalised. Ricardo Pereira in space on the right, advancing before cutting inside the defence and unleashing a powerful left foot shot past Hahn to make it 3-2.

On the hour mark the impressive Tozé gave way for Iuri Medeiros as the Netherlands refused to die. This time a corner evaded everyone except Nathan Aké who had a simple tap in to give the visitors more hope at 3-3.

Ricardo at the double

Portugal immediately extinguished that hope. Carlos Mané put Ricardo Esgaio behind enemy lines, the right back getting the ball to Ricardo Pereira, his powerful right foot strike from the edge of the area beating Hahn for 4-3.

El Ghazi replaced Hupperts as Rui Jorge implemented a tactical switch, Iuri Medeiros wide right with Bernardo Silva dropping deep. Medeiros was immediately profiting from the switch, getting into plenty of space as he first fed Ricardo Pereira, whose hat-trick effort was blocked.

Drost replaced Maher and Ligeon for Brenet before Carlos Mané almost replicated his spectacular effort in Alkmaar, curling an effort over the bar. Medeiros found an unmarked Ricardo Pereira again but he slipped with his volley flying well wide. Medeiros and Ricardo Pereira combined once again, this time the Sporting youngster with the shot, Hahn saving.

Rui Jorge allowed Ricardo Pereira a standing ovation, Ricardo Horta coming on and he soon had his chance, a chip over the advancing Hahn just wide. With minutes remaining Bernardo Silva got beyond the defence, advanced into the area, went down, got up and beat the defence and Hahn with a fine strike to settle matters at 5-3.

Ruben Vezo dragged down Weghorst just inside the area to give Aké a consolation from the spot, but it wasn’t enough to stop Portugal as they settled on a 5-4 victory which preserves Portugal’s perfect record. They fully deserve their ticket to the Czech Republic in 2015. 10 out of 10 is an historic achievement by Rui Jorge and his young men.

Ricardo Pereira was the standout performer in Paços de Ferreira as he tormented the Dutch defence, bagging two and unlucky not to secure a hat-trick. Bernardo Silva played much deeper than the first leg which has this commentator perplexed, as we saw how speedy, tricky and composed he can be in an instant as he ended up scoring a great solo goal.

Tozé was more effective than Rafa Silva, his quality from dead ball situations creating two goals and his general play impressive. Conceding four goals is never ideal, but with the tournament months away now is the time to celebrate.

While Rui Jorge will be concerned with some less than convincing defending - especially when dealing with crosses and set-pieces - he will definitely be thrilled with his side's outstanding attacking play. Ricardo and Bernardo were both immense....

While Rui Jorge will be concerned with some less than convincing defending - especially when dealing with crosses and set-pieces - he will definitely be thrilled with his side's outstanding attacking play. Ricardo and Bernardo were both immense. Ricardo is too good to be warming the bench at Porto, but it is understandable given the depth they have on the wings. Bernardo is a world-class attacking midfielder in the making: technical brilliance, superb movement, fantastic work-rate, I could go on and on. It's a shame JJ never gave him a chance to prove his worth at Benfica.

Surprised there are so few comments on this great story. 15 game winning streak, demolition of the Dutch, Marcos Lopes, Bruma, Paulo oliveira, Joao Cancelo, Bernardo and so many others. Wow. Let's hope these guys can all mature into the next...

Surprised there are so few comments on this great story. 15 game winning streak, demolition of the Dutch, Marcos Lopes, Bruma, Paulo oliveira, Joao Cancelo, Bernardo and so many others. Wow. Let's hope these guys can all mature into the next great Portuguese generation. Much respect to Rui Jorge as well, who is a good tactician.

We're behind this Seleccao as well!