Portugal U21s finish with a flourish to make Euro 2019 playoffs 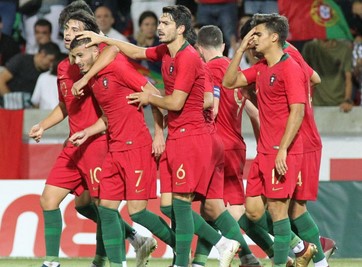 Portugal’s U21 team made the play-offs for the 2019 UEFA European Under-21 Championship with a 4-2 win against Bosnia-Herzegovina at the Estádio dos Barreiros in Madeira tonight. The win followed a commanding 9-0 thrashing of Liechtenstein to leave Rui Jorge’s side on 22 points in Group 8.

Romania topped the group but Portugal were good enough to be one of the four best runners-up. They will meet Greece, Poland or Austria in the play-offs which will be held in November.

Group 8 whipping boys Liechtenstein never stood a chance against Portugal and went behind as early as the 2nd minute through a Noah Graber own goal. Bruno Costa hit the woodwork before producing a cross to the back post, Mathias Lage squaring to Heriberto Tavares who headed in from close range to make it 2-0.

João Filipe was fouled outside the area on the stroke of half-time, the U19 star stepping up to fire a free kick past Armandno Majer. 3-0. It was 4-0 a minute after the restart with Tavares bundling home his second goal after a defensive mix-up. Tavares should have completed his hat-trick but saw a close-range header saved by Majer. It was soon 5-0 however, Tavares brought down in the box with Diogo Gonçalves sending Majer the wrong way from the penalty spot.

No respite for the hosts

Gonçalves crossed to Tavares who tapped in from close range for Portugal’s 6th before substitute Diogo Jota finished from a tight angle. 7-0. Some impressive play from Bruno Costa in added time saw his cross find substitute Gil Dias who made no mistake. 8-0. Liechtenstein then conceded a minute later to complete the rout, Moreirense striker Tavares getting his fourth goal as he headed home from a corner. 9-0.

Portugal’s fate in their own hands

The results elsewhere across Europe were fortunate for Portugal who knew a win against Bosnia-Herzegovina would secure a playoff spot. Manager Rui Jorge made seven changes with only Dalot, Jorge Fernandes, Pêpê Rodrigues and João Filipe keeping their spots in Madeira.

Diogo Jota had an early chance and João Félix headed wide as Portugal signaled their intent. Pêpê Rodrigues tried a shot from distance before André Horta showed him how it’s done, finding the bottom corner with a powerful long-range effort to open the scoring.

Horta tried his luck again from distance which tested keeper Nemanja Trkulja before João Filipe headed wide. Diogo Dalot was heavily involved at right-back and João Félix was busy across the attacking line as the hosts dominated the match.

Portugal were cruising towards a 1-0 half-time lead but were shaken when the visitors equalised. A slick passing move saw Ermedin Demirović beat the offside trap, control and fire past Joel Castro to make it 1-1.

Diogo Gonçalves replaced Dalot shortly after the restart and immediately got involved by picking up a caution. The Seleção then regained the lead in fortunate circumstances, a deflected shot coming back off the bar to João Félix who pounced to fire it home.

It would soon be 3-1 after a fabulous solo run from Diogo Gonçalves. Picking up the ball on the right wing, the Nottingham Forest winger beat a number of helpless Bosnia-Herzegovina bystanders before firing home for his seventh goal of the campaign.

Portugal controlled proceedings and extended their lead in added time. The impressive João Filipe drove into the penalty box, beating a number of players before chipping into the net, with substitute Heriberto Tavares getting a touch on the line to make sure.

A clumsy collision from a free kick between Joel Castro and Diogo Leite allowed Aldin Turkes to stroke the ball into an empty net, but it was too little too late for Bosnia as Portugal secured a deserved 4-2 victory.

It was a solid performance from Rui Jorge’s men with notable contributions from Diogo Dalot, André Horta, João Filipe, João Félix, Diogo Jota and Diogo Gonçalves off the bench. There is an abundance of quality in this team with speed and skill at the forefront.

Greece were the best runners-up on 25 points with Poland, Austria and Portugal all finishing with 22 points. The four nations will be in the UEFA European Under-21 Championship play-off draw at 13:00CET in Nyon on Friday 19 October.

The play-offs will decide the last two places in the finals with the two home-and-away ties to be played between 12 and 20 November 2018. The two winners will join the nine group winners and co-hosts Italy in the finals which will take place in Italy and San Marino between 16 and 30 June 2019.

Portugal have never won the tournament, finishing as runners-up on two occasions. They lost the 1994 final in France with a 1-0 extra-time defeat against Italy with a team that included Rui Costa, Luís Figo and tournament top scorer João Pinto.

The current crop of talent might not be such heralded names - for now - but Rui Jorge will be confident his Esperanças can make a splash next year should they negotiate the playoff and keep up their free-scoring ways.

Related: Portugal U21s leave themselves with uphill task to qualify for Euro 2019

Did anyone get to watch it? I couldn't find a link anywhere.

Same here Jerrold, searched everywhere but didn't find a link. But watched the highlights on youtube, the third scored by Diogo Gonçalves is a killer, he passed 4 5 players and scored. The playoffs to be decided this Friday, the three others are...

Same here Jerrold, searched everywhere but didn't find a link. But watched the highlights on youtube, the third scored by Diogo Gonçalves is a killer, he passed 4 5 players and scored. The playoffs to be decided this Friday, the three others are Greece, Poland, and Austria. Wow what a day, I followed three matches waiting for either Poland or Russia/Austria or Sweden to slip, till the swedish were beaten badly by Belgium for us to go Fourth of the top four best second.

I caught the game last night on CMTV online. Wasn't the clearest picture and had to go through a heap of ads to get there but it was the only way for me.

And how did they look? Convincing?

Only saw the highlights. Couldn't find any streams. The last 2 goals were beautiful. Uefa should stream these games on their YouTube channel like they do for the futsal tournaments.

Given the fact that there is a strong possibility that Portugal will be competing in three different international tournaments next summer (U20 World Cup -- guaranteed, U21 European Championship, and the Uefa Nations League finals), it'll be...

Given the fact that there is a strong possibility that Portugal will be competing in three different international tournaments next summer (U20 World Cup -- guaranteed, U21 European Championship, and the Uefa Nations League finals), it'll be interesting to see how this incredibly promising talent pool is going to be divided into three competitive squads, especially since quite a few of our best U20 players (Joao Felix, Jota, Dalot, Diogo Leite, etc) have been playing regularly for the U21s in recent months.

I am personally in favor of keeping players in their appropriate age group. The U20 side appears to have more talent on paper, but there is still more than enough quality at Rui Jorge's disposal to select a highly competitive squad from players between the ages of 21 and 23.

Moreover, since the Uefa Nations league will only consist of two matches in early June, the likes of Goncalo Guedes, Ruben Neves, Renato Sanches, and Ruben Dias could all theoretically participate in both the Nations League finals and the U21 finals.

A U20 side with Jota, Joao Felix, Gedson Fernandes, Dalot, Diogo Leite, Trincao, Vinagre, Rafael Leao, Florentino Luis, and potentially Umaro Embalo would surely go into next summer's world cup as one of the tournaments's genuine contenders.

And a U21 side with the likes of Goncalo Guedes, Renato Sanches, Ruben Neves, Ruben Dias, Diogo Jota, and Diogo Goncalves is perfectly capable of going one step further than the 2015 side of Bernardo Silva and William Carvalho.

These are some truly exciting times to be a Seleccao fan! I've been following Portuguese football since 2006, and this is, by far, the strongest generation that I have ever seen. The golden generation of the 90s and early 2000s had a handful of some very special players, but the sheer depth in talent of this generation is absolutely incredible.

Moreover, since the Uefa Nations league will only consist of two matches in early June, the likes of Goncalo Guedes, Ruben Neves, Renato Sanches, and Ruben Dias could all theoretically participate in both the Nations League finals and the U21...

Moreover, since the Uefa Nations league will only consist of two matches in early June, the likes of Goncalo Guedes, Ruben Neves, Renato Sanches, and Ruben Dias could all theoretically participate in both the Nations League finals and the U21 finals

Wot up Jon.
Zero chance of this happening. Their clubs wont allow them to participate in both of those and will no doubt push for them to play minor parts in the Nations League.

Concur with Nick, very unlikely they would play both tournaments, unless clubs are looking to sell the player and want to get more exposure and they are only on senior team bench. Dias, is a Senior starter, he will not play down. Despite Carvalho...

Concur with Nick, very unlikely they would play both tournaments, unless clubs are looking to sell the player and want to get more exposure and they are only on senior team bench. Dias, is a Senior starter, he will not play down. Despite Carvalho and now Danilo available, I don't see Neves not being picked for the Senior side. Sanches had been playing for the under 21, but now that he is playing for the Seniors again, he won't play in under 21's unless he gets doesn't get picked for final squad. Guedes is interesting. With Bruma playing well and Costa also called up, and if Quaresma gets called up, maybe Guedes will be surplus.

The main selection issue is that several players from the under 20's are playing up. Gedson in the Seniors, and Joao Felipe, Dalot, Joao Felix, Diogo Leite were key players to get them past Bosnia.

If all the above players play with the under 20's, they will have to be one of the favorites to win, especially after being back to back under 17 and under 19 Euro champions. If they win the under 20 world cup, will that make them another golden generation or do we need two in a row like in 89 and 91?

Either way, given the talent and depth in the under 20 players, I say it is another golden generation in my opinion.

Of course, it doesn't guarantee anything as we saw with the first golden generation. However, they did put Portugal back on the map of international soccer.