The biggest transfers of Portuguese players in football history 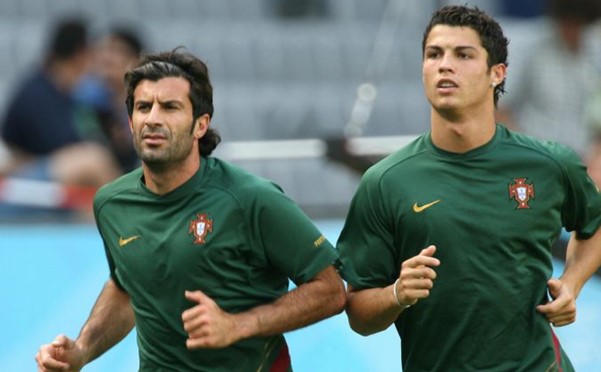 Football is the world’s most popular sport, and Portugal is no exception. Its domestic league features fierce rivalries and prestigious clubs that have prospered in European competition, and its national team has increasingly made itself an elite performer on the world stage.

It is no surprise, therefore, that Portugal has produced some of the best players on the planet who play for the leading clubs in Italy, England, and Spain. Add in the fact that Jorge Mendes is the most powerful agent in the world and most of his clients are, like him, Portuguese, and the ingredients are in place for some of the biggest (and in some cases most controversial) transfers of footballers over recent years.

PortuGOAL focuses on three astronomical transfers of Portuguese players that made headlines all over the world.

Cristiano Ronaldo has been one of two best players in the world over the last two decades, many even arguing the Madeira-born sensation has been number one and is in the conversation as the best footballer of all time, which helps explain why every big football club wanted him on its books.

While playing for Manchester United, rumours of a move to Real Madrid circulated for years, and they came to fruition in the end as Ronaldo joined the La Liga giants on 11 June 2009. The Spanish team had to pay the world-record amount of £80,000,000, which was unheard of back then.

However, the transfer ended up good business for the Spanish club, with Cristiano and Real Madrid proving to be a match made in heaven. Besides the fans, bettors were also happy because every old-school bookie back then, that’s now available on the Silentbet online list, included various new markets and promos concerning Ronaldo and his new team.

While he was a part of Los Blancos, the Portuguese superstar won the Ballon d’Or (the most prestigious individual award in football) four times. What’s more, he also became the all-time top goalscorer for the club, which is impressive considering the fact he did so despite playing for fewer years at the club than other Real Madrid legends.

Cristiano Ronaldo is even regarded by many football analysts as the best player to ever step foot on the Estadio Santiago Bernabéu pitch, which is an extraordinary achievement. Don’t forget that Real Madrid was home to some of the biggest legends in this sport, such as Alfredo Di Stéfano, Zidane and Raúl.

It’s safe to say that Figo’s move from Barcelona to their biggest rivals Real Madrid was one of the most controversial transfers of the 21st century. Needless to say, Barca’s fans were furious, and for a good reason. The transfer was so big that it even affected the betting industry, which at the time was not as developed as it is today.

Figo became a part of Real Madrid back in 2000 during a time when he was considered to be the best footballer in the world. The person who made the transfer possible was Florentino Perez. He participated in the presidential elections held in Real Madrid, and after promising that he would sign Barcelona’s superstar, he got elected.

Once that happened, Perez successfully completed the transfer worth around €62,000,000. Barcelona fans never forgave the Portuguese wing wizard, showering him with vitriolic abuse whenever he returned to the Camp Nou, and a pig’s head was famously thrown at him from the crowd on one occasion.

Nonetheless, Figo was a big hit at his new club over a number of the years, as Real became known as the “Galacticos” because of their expensively assembled team of charismatic world-famous footballers, of whom Figo was among the biggest stars. After five years in Spain, in 2005, Figo made a move to Inter Milan, where he played until 2009.

The third mega-transfer of a Portuguese player also involved a move to Madrid, but this time to Atletico. On 3 July 2019, Los Colchoneros paid an astonishing €126 million to sign João Félix from Benfica.

The size of the fee made Félix the fourth highest football transfer in history, which is all the more remarkable given that he was still a teenager and he had only played little over half a season as a first-team starter for the Portuguese club. Nevertheless, his productivity (20 goals), inventiveness and maturity in a Benfica shirt persuaded the Spanish club to trigger his release clause and buy the player before any of their rivals did.

Unlike the transfers of his compatriots Luís Figo and Cristiano Ronaldo, it is too early to say whether the transfer of João Félix has been a success, but the early signs are good. Many analysts were worried that the notoriously defensive tactics of Atletico coach Diego Simeone would not suit Félix’s attacking game, and so far the Portugal international has not been able to replicate the numbers from his Benfica days.

However, João Félix has established himself as one of the brightest stars of La Liga, undoubtedly one of the best leagues in the world, winning the Player of the Month award in November 2020. The pointers are strong that there will soon be another “Portuguese King of Madrid”.