Portugal’s three Ballon d’Or winners and how they rank 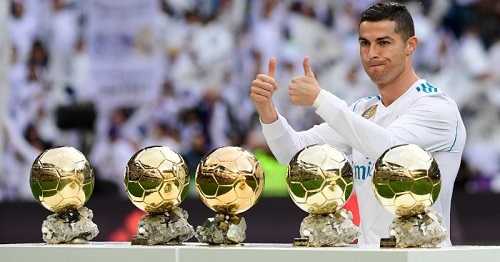 When it comes to naming the greatest ever Portuguese footballers, most fans of the beautiful game will have one name springing to the top of their minds no matter their age, but what about the other two winners of the Ballon d’Or?

This is the individual trophy otherwise known as the World Footballer of the Year, which honours the standout player in the world over the calendar year. There have been three different Portuguese winners since its conception in 1956, with Cristiano Ronaldo being attributed the award on an incredible five separate occasions.

Since 2008, Ronaldo has won the Ballon d’Or not once, not twice, not thrice, not four times, but five times! Only Lionel Messi is ahead of him on the all-time list, having won the award six times in his career to date. Ronaldo, who is still going strong at 36 years old having scored recently for Juventus against Roma, is recognised as one of the greatest players of all time putting him on lists alongside the likes of Messi, Pele, and Maradona.

In terms of individual and collective success, Ronaldo is certainly Portugal’s best player, having won the Ballon d’Or so many times and winning countless trophies wherever he has played, and of course, captaining Portugal as they won Euro 2016.

Speaking of the Euros, Ronaldo will look to defend that title in the 2020 (postponed until 2021) edition of the tournament. As is so often the case, Portugal are currently considered outsiders to reclaim the title among the bookies, and at 12-1 they represent good value. France are the favourites to win the European Championship this time around at 3-1 while England, Spain, and Belgium are 4-1, 5-1, and 6-1 respectively.

Given that Portugal are the reigning champions, and with Ronaldo having an exciting support cast of attacking talent to help him, they might be worth a flutter at that price. You may not even have to use your own money as some sports betting sites give you free bets for signing up and depositing. Sites like Freebets.uk show you the best places to find these Euro 2020 free bets thanks to their Euro football betting guides, excellent Euro 2020 betting markets, enhanced odds, and bonus bets.

Eusébio is still classed as one of the greatest players of all time, and many of the older generations who were fortunate to see him play insist he should be held in higher regard. While modern fans of the game point to Figo and Ronaldo, Eusébio’s statistics make for eye-watering reading, scoring an amazing 733 goals from a career that spanned 745 games.

He won his World Footballer of the Year award in 1965 in an era that included greats such as Bobby Charlton, George Best, Denis Law, Johan Cruyff, Franz Beckenbauer and Gerd Muller and almost single-handedly fired Portugal to third place in the 1966 World Cup, finishing the tournament as top scorer.

What goes against him in some people’s evaluations is the fact he spent most of his career playing for one club, Benfica, in Portugal’s top division which at the time was not seen as one of the strongest leagues in the world. That said, the fact he turned Benfica into one of the most feared teams in world football and brought success to the national team gives him the edge over Figo.

Although Figo is ranked below Eusébio in this list, he won more prestigious honours throughout his career at clubs such as Barcelona, Real Madrid and Inter Milan. Luís Figo was a magnificent winger, a dazzling dribbler with a keen eye for goal and setting up his team-mates. Still to this day he is second only to Lionel Messi for total La Liga assists. Figo remained highly effective when dropping into more of a midfield role later in his career.

One slight against his achievements is that being a leading member of Portugal’s fabled ‘Golden Generation’, he was never able to lift a senior international trophy.

Could there be a new Portuguese Ballon d’Or winner in the next few years?

Portugal has always produced talented footballers and the well is far from running dry. Bernardo Silva and Bruno Fernandes are both performing at the highest level for two of England’s biggest clubs, Manchester City and Manchester United respectively, but youngster João Félix is the Portuguese footballer most often touted as a good bet to be crowned the best player in the world in the not-too-distant future.