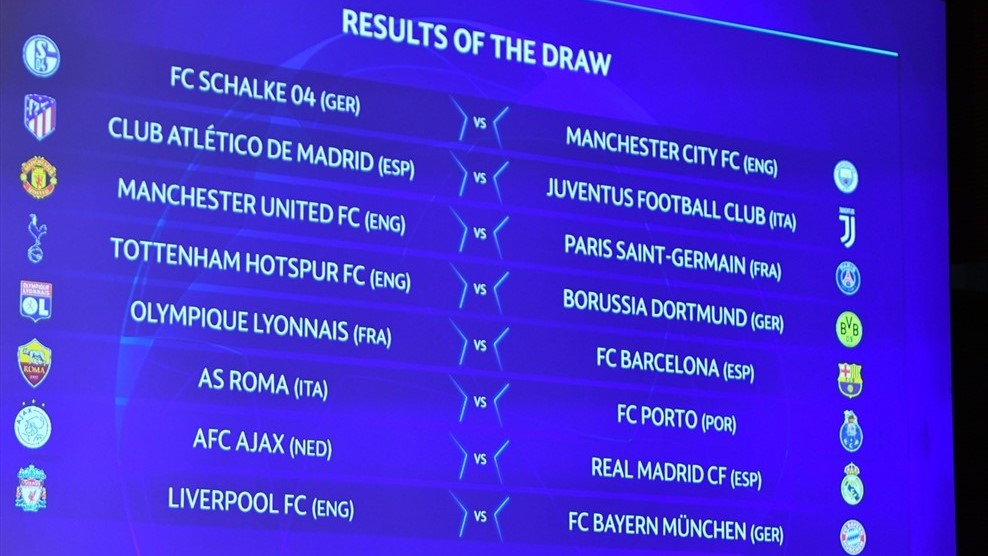 Portugal’s three biggest teams will be cautiously optimistic about their chances of European progression after today’s Champions League and Europa League draws held in Nyon.

Porto were handed a promising fixture against AS Roma in the Champions League. Benfica will face Galatasaray and Sporting will head to Spain to face Villarreal in the Europa League.

In the Champions League Round of 16 FC Porto drew AS Roma, avoiding some of more daunting potential opponents. Porto will meet a familiar foe with defender Iván Marcano making a hasty return to the Estádio do Dragão after leaving for Roma in the summer, although the Spaniard is hardly a regular in the Italian team.

Roma have been consistently inconsistent this season under manager Eusebio di Francesco. Sunday’s 3-2 win over Genoa was the Giallorossi’s first win in over a month.

Porto have never lost a competitive game against Roma and memories of knocking Roma out in the Champions League Qualification rounds back in 2016 are fresh in the mind. Porto drew 1-1 at home before an impressive 3-0 win at the Stadio Olimpico, with help from Daniele De Rossi’s early dismissal in that game.

Roma legend and club director Francesco Totti said his side was lucky to draw Porto, “we were lucky considering the teams that we could have had but we can not underestimate FC Porto”. Totti also praised Porto as having a great team, saying that they “played excellent football during the group stages.”

Porto will visit Rome on the 12th February before the return leg at the Dragão on the 6th March.

In the Europa League Benfica face a journey to Turkey to take on Galatasaray.

Galatasaray are not quite the daunting trip they used to be. The Istanbul club currently sit 5th in the Turkish Süper Lig. They finished 3rd in their Champions League group that included two defeats to Porto. The two sides met in the Group Stages of the 2015/2016 season with both sides recording a 2-1 victory at home.

“We have to be prepared,” said Luisão of the upcoming games. “In Turkey the atmosphere is very difficult. Our team will be up to it, because we already know and have faced these kind of atmospheres. I expect a very difficult game but Benfica always believes in progressing.”

Galatasaray host Benfica on the 14th February with Benfica playing at home on the 21st February.

Finally, Sporting got the shortest journey of the three Portuguese sides with a trip to Spain to face Villarreal.

This is a first-time meeting between the two clubs although Sporting have some bad memories of visits across the border. It’s hard to forget last season’s defeat to Atlético Madrid and the massive fallout that happened as result.

Indeed, Spanish sides have long been a stumbling block for Sporting in Europe. You have to go back to 1986 to find the last time Sporting managed to eliminate a Spanish side in a European knockout game. Villarreal will be a tough game, however domestically they are struggling and sitting just one point above the relegation zone.

The first leg will be held at the Alvalade on the 14th February and the return leg in Villarreal on the 21st February.

Other notable Portuguese involvement in the Europa League sees William Carvalho’s Real Betis take on Rennes, André Silva and Daniel Carriço at Sevilla have a tough tie against Lazio and the Portuguese contingent at Olympiacos faces Dynamo Kyiv.