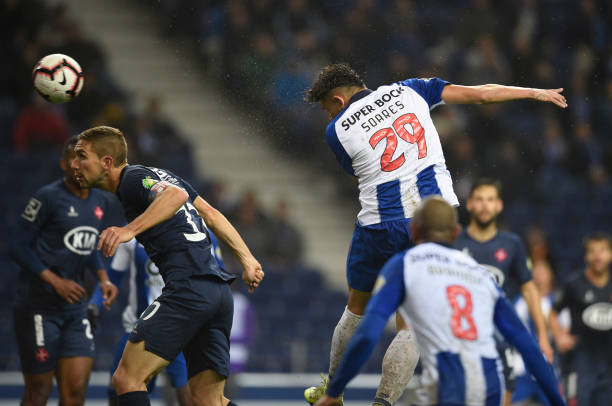 FC Porto have tightened their grip on the top of the table after returning to winning ways with a 3-0 victory at home to Belenenses. The Dragons’ victory followed the triumphs of second-placed Benfica, dismantling Boavista 5-1 at home, and Sporting de Braga, who claimed all three points with a slender 1-0 win over Santa Clara.

Unlike their competitors, recently-crowned League Cup champions Sporting were unable to keep apace with the rest after drawing 1-1 away to Vitória de Setúbal, having played out much of the second half down to 10 men. As always, PortuGOAL is here to provide the best of the action.

After their semi-final Taça da Liga disappointment, Benfica switched their attentions to league football in reception of Boavista, now managed by Litos Vidigal, at the Estádio da Luz.

A nervy start for the Eagles handed Aymen Tahar the opportunity to break the deadlock early, courtesy of Gabriel’s short back-pass to Odisseas Vlachodimos, but the English midfielder failed to make full use of his clear route to goal when dragging his finish onto the outside of the post.

The Black Panthers were punished soon after via João Félix’s leap at the back-post, nodding in from Pizzi’s wide free-kick delivery in the 9th minute.

Pizzi’s set-pieces caused danger again in the 26th minute, as Rúben Dias found the top of the crossbar with header before Pizzi himself, reacting first to Haris Seferovic’s saved shot in the 28th minute, was on hand to volley home from close range and double Benfica’s lead.

Talocha stepped up to halve the deficit just before half-time, but the hosts’ two-goal-advantage was restored nine minutes into the second period through Seferovic, requiring just one touch to finish off João Félix’s teasing cross.

Seferovic claimed goal number four with another tap-in in the 72nd minute, reserving the pick of the bunch for Alejandro Grimaldo four minutes from time, who found the top corner from outside the box and seal a 5-1 victory for Benfica.

Keen the make amends for their highly-protested-against semi-final defeat to Sporting in the Taça da Liga, Braga’s mission was to follow up Benfica’s win versus Boavista and reapply pressure on second place, ahead of Sporting’s trip to Setúbal on Wednesday night.

Abel Ferreira’s side wouldn’t provide the response the Estádio Municipal de Braga has been hoping for, however, as both teams took to the half-time break goalless after a relatively dry first half.

Santa Clara came very close to changing all that ten minutes into the second period prior to Tiago Sá starring between the sticks for the Arsenalistas, firstly denying Osama Rashid from the penalty spot before impeding César’s header moments later from breaking the deadlock.

Luck remained on Braga’s side in the 58th minute, as Paulinho pressed high to rob the ball in a dangerous area before delivering a cross into Dyego Sousa, who was able to squeeze a header in under the goalkeeper.

The hosts pressed on for a second but the right circumstance failed to arise, as Dyego Sousa’s second-half effort proved to be the deciding factor between both sides come full-time.

Stepping into the Bonfim as “the Champions of Winter,” following success in the League Cup final against Porto, Sporting came back into the Liga NOS scene with numerous absences in the defensive sector, losing Jeremy Mathieu and André Pinto to injury, Nemanja Gudelj to suspension, while Marcos Acuña remains Zenit-bound.

Filling in Acuña’s shoes was Jefferson, who on two occasions came close to assisting Bas Dost from left-back, as the Dutchman scuppered both opportunities with his head in the opening 15 minutes.

Against the run of play, Setúbal’s Jhonder Cadiz caught Radosav Petrovic lacking on the counter before firing an effort past Renan Ribeiro to give the Sadinos a 1-0 lead.

There was no way back for Sporting coming into the interval, with matters worsening for Marcel Keizer’s side in the second half after Stefan Ristovski’s straight red card, as the Macedonian full-back fumed at officials after being struck by an unpunished stray elbow in the 54th minute.

A late goal from Dost, providing a subtle diversion from Bruno Fernandes’ tame effort on goal, offered Sporting hope ten minutes from normal time, as they pushed on for all three points with ten men.

The game almost swayed back the over way, however, when Nani’s sloppy pass-back to Renan was hijacked by Hildeberto Pereira, who failed to overcome the Brazilian shot-stopper one-on-one before the full-time whistle called time on a 1-1 draw.

The share of the spoils leaves Sporting ten points behind league leaders Porto and five away from second-placed Benfica, who they play at the weekend in Sunday's Lisbon derby at Alvalade.

Welcoming a steady Belenenses side to the Estádio do Dragão, focus from Sérgio Conceição’s side was on a victory to get his team back on winning terms, as they aimed to strengthen their bid for the title at the top of the table.

Yacine Brahimi led the crusade after just five minutes of football, steering in Jesús Corona’s carefully-considered cut-back to give the Dragons an early lead.

The Algerian’s predecessor, Licá, came close to pulling a goal back for Belenenses at the other end, tearing away from the left on the counter-attack before firing a shot into the side-netting in the 18th minute.

Porto took the warning on board to make it 2-0 before the half-hour mark through Éder Militão, powering a header in from Alex Telles’ cross.

Óliver almost built on the lead in the 65th minute but was denied by Muriel, but the Spaniard then found Tiquinho Soares with a clever left-footed cross, enabling the Brazilian to apply the knockout blow to Belenenses with a close-range header and a third for Porto.

Three goals and three more points for the title holders, as they maintain a five-point lead at the top of the Primeira Liga table.

Benfica fans all excited about Joao Felix. But dont worry, once the self loathing JJ comes to town Joao Felix will be converted to right back and made to ride the bench for the next 2 seasons and then sold to Monaco for peanuts where he will...

Benfica fans all excited about Joao Felix. But dont worry, once the self loathing JJ comes to town Joao Felix will be converted to right back and made to ride the bench for the next 2 seasons and then sold to Monaco for peanuts where he will resurrect his career.


If you put all the Portuguese players JJ screwed over with his time in Portugal you could fill a team bus.

That was some really bad referring in the Vitoria v Sporting. Even my dad who is a Benfica fan was complaining about almost every decision.

He called dangerous play for two overhead kicks? even thought they weren't even close to the other...

That was some really bad referring in the Vitoria v Sporting. Even my dad who is a Benfica fan was complaining about almost every decision.

He called dangerous play for two overhead kicks? even thought they weren't even close to the other players...

Oh well at least Sporting are now truly out of the League, hopefully they can do well in the Europa League and even win the Taca de Portugal and it be one of the best years they've had since Paulo Bento's era which just says it all