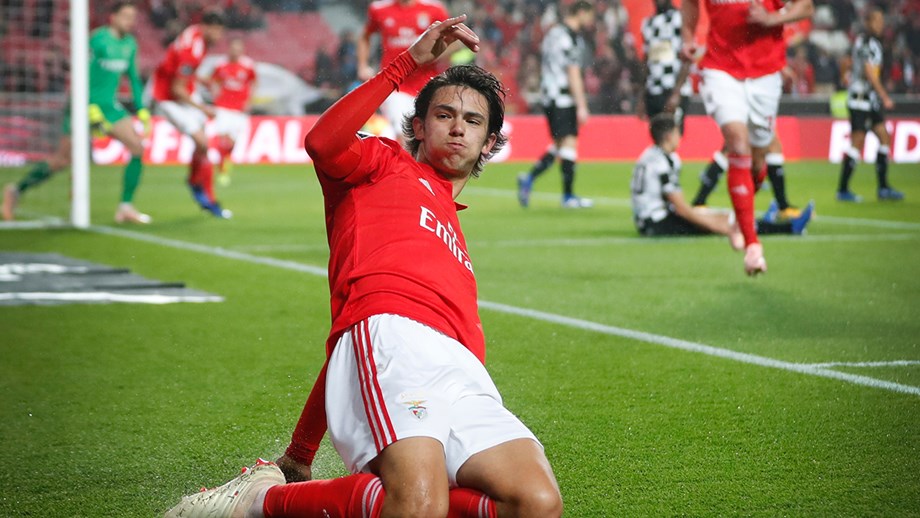 A series of early week Liga NOS matches followed the conclusion of this season’s Taça da Liga, and it was a round in which the participants of Saturday night’s final experienced contrasting emotions: Porto bounced back from defeat to maintain their lead at the top but victors Sporting had to settle for a point away at Vitória Setúbal.

Aves, Chaves and Rio Ave all picked up very important wins away from home also, but the most eye-catching scoreline came at Estádio da Luz as Benfica blew away Boavista 5-1, in no small part due to another sparkling performance from the hugely promising youngster João Félix.

The highly rated teenager is PortuGOAL’s Figure of the Week.

Much has been talked about the precocious 19-year-old and for good reason. The list of clubs who are supposedly pursuing him feature some of the very best in Europe as Félix looks to be the latest success story from Benfica’s academy.

Félix actually began his footballing career at fierce rivals Porto before a move down south to Lisbon in 2015. After featuring for Benfica’s youth teams and B side, he was called up alongside the seniors for this campaign and has experienced a breakout moment in his career. Ironically, Félix could now be the Benfica player doing more than any other to hurt Porto’s chances of retaining their Primeira Liga crown. To bet on Benfica finishing top of the pile at the end of the 2018/19 season go to www.maxfreebets.co.uk.

Although largely restricted to substitute appearances for most of the campaign, Félix was still having a significant impact on games for a player so young, most notably netting an early season equaliser in the Lisbon derby against Sporting. Since the turn of the year though, Félix has been a fixture in the XI, his great form too difficult to ignore despite strong competition in attacking areas.

Félix had been predominantly used from the left flank in his appearances prior to his regular run in the side, but it’s more centrally as an attacking playmaker that he is best used, as his excellent recent performances have proved. From this position he caused all manner of problems to a beleaguered Boavista side on Tuesday night.

Félix is slight of frame but has an incredibly deft touch and nimble footwork. In addition to his high technical skill however is the confidence to pull off such feats despite his tender years. Benfica took the lead against Boavista in just the 8th minute and it was Félix who supplied the breakthrough, showing impressive aerial ability to power a header past Helton Leite.

The clip above briefly shows his quick feet to draw the foul that led to the assisting free kick also, Félix being too quick for his opponents being a theme for the evening.

Benfica were clearly too strong for Boavista, and having led 2-1 at the break they increased their advantage in the 54th minute. Haris Seferovic scored the goal, but Félix was the architect with a magnificent assist. After receiving Pizzi’s pass, he skipped away from a wild challenge from Gonçalo Cardoso before finding Seferović with a superb ball to give the Swiss striker a simple finish.

The pass was exquisite, made to look so easy for Félix and Seferović didn’t have to break his stride with the chance laid on a plate for him.

Benfica went on to rout their opponents 5-1, and maintain the gap to rivals Porto in the title race.

Another scintillating display will have alerted Félix’s many suitors, who are believed to include Liverpool, Barcelona, Bayern Munich and Borussia Dortmund to name but a few. One hopes he doesn’t make the move too prematurely in his career as other Seixal academy products have done before him, but his trajectory points him in one direction only - to stardom - and fast.

I thought Bernardo Silva was far and away the most talented player Portugal has produced since Ronaldo, but Felix could end up giving him a run for his money. The kid is pure class. His end product and decision making in the final third is...

I thought Bernardo Silva was far and away the most talented player Portugal has produced since Ronaldo, but Felix could end up giving him a run for his money. The kid is pure class. His end product and decision making in the final third is particularly impressive, especially given his lack of experience. Let's just hope that he doesn't leave Portugal prematurely a la Renato Sanches. He is definitely more polished than Renato was at 18, but it is still far too early to be talking about a move to one of Europe's elite.

Couldn’t agree more Jon. The kid is pure class. Lets just hope he stays in Portugal.
This new coach actually knows how to use him unlike Vitoria who kept putting him out wide. I just wish Gedson wasn’t relegated to the bench undeservedly.