PortuGOAL Figure of the Week: Bruno Fernandes at the double for up & down Sporting 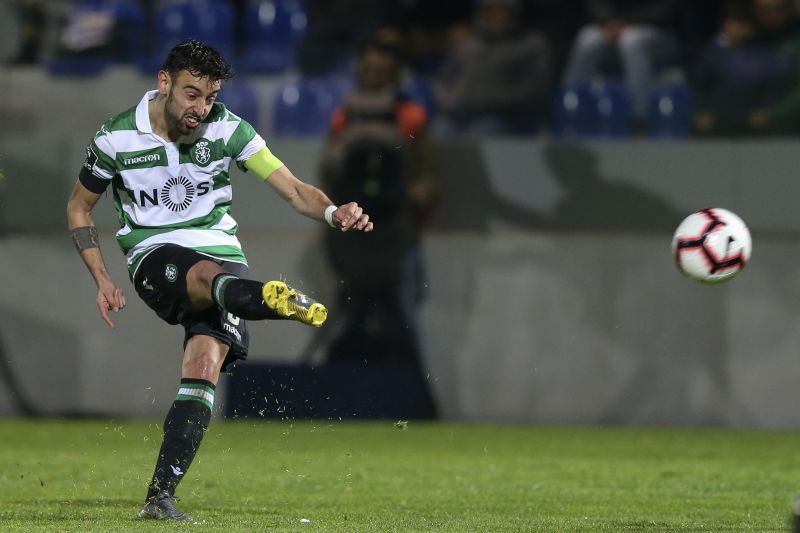 Week 21 of Liga NOS saw a number of closely fought encounters as the likes of Rio Ave, Aves and Boavista continued recent revivals with narrow victories, while leaders Porto again dropped points in their bid to retain the title.

Of course the outstanding memory of this round of matches will always be Benfica’s annihilation of Nacional at Estádio da Luz, cutting Porto’s lead at the top to 1 point after a remarkable 10-0 win. It’s difficult to identify a single individual from that stunning team display as Benfica fired on all cylinders throughout, including 8 different players getting on the  scoresheet.

As a result, for the purposes of this feature, this edition of Figure of the Week switches to the green half of Lisbon as Bruno Fernandes put another indelible mark on a superb personal campaign in his side’s 3-1 win at Feirense.

Sporting have been experiencing their fair share of ups and downs over the past few weeks, ranging from enjoying Taça da Liga success to suffering consecutive defeats at the hands of bitter rivals Benfica.

One constant though has been the sensational form of talisman Bruno Fernandes, who took his goal tally to 20 for the season on Sunday night with another typically accomplished performance.

Sporting had taken a 1-0 lead into half time after an own goal from Antonio Briseno, but we looking shaky in defence, requiring a VAR decision to overturn an opening goal from Feirense, as well as an unbelievable save from goalkeeper Renan Ribeiro to keep the home side at bay. The Lions got some breathing room in the 58th minute though, Fernandes ghosting into the penalty area for a rare headed goal following Abdoulay Diaby’s well delivered cross.

10 minutes later Fernandes added his second of the game to wrap up the three points for Sporting. This time the goal was more typical of the 24-year-old, scoring directly from a free kick for the second game running to make it 3-0.

He had shown how adept he was at set pieces in the midweek Taça de Portugal defeat to Benfica with an effort from even further out, it’s an area of his game that looks to have improved this season.

If Fernandes was one of Sporting’s best players last season, there’s no question this time around he has been their main man outright as others around him have struggled. His record of 20 goals and 10 assists from 36 games across all competitions is a fantastic return from attacking midfield, and you really wonder what this squad would be capable of without him.

Thankfully for Sporting his fitness record this season has been exemplary, although they are likely to have to make do without him for one match at least in the near future as he is a yellow card away from a league suspension, his accumulation of cautions being something quite notable as the player’s frustrations have often appeared simmering towards the edge on a few occasions throughout the campaign.

It’s difficult to argue against suggesting that Fernandes is the best player in the country at the moment, and Sunday’s victory in Santa Maria da Feira showed why.

Bruno Fernandes has been the best player in the league this season. If only Fernando Santos started him during WC 2018 instead of pylons such as Guedes, I think we may have won the whole tournament.