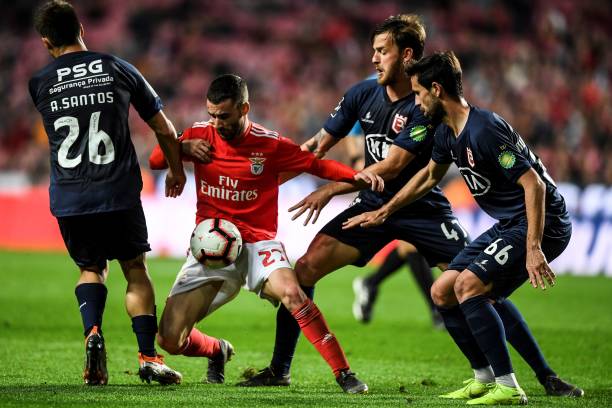 Benfica surrendered a two-point advantage at the top of the table after a 2-2 draw at home to Belenenses enabled FC Porto to draw level on the 60-point-mark alongside the Eagles.

The Dragons were victorious in their away trip to Feirense, coming back from a goal down to win 2-1, with head-to-head results keeping Benfica on top of the two-way tussle for the Primeira Liga title.

In the race for third place, a first-half strike from Ricardo Horta was enough to give Sporting de Braga a crucial 1-0 triumph against their Minho rivals Vitória de Guimarães, with Sporting following up that win with late drama in a 2-1 victory away to Boavista, last Saturday.

As always, PortuGOAL rounds up all of the goal-action at the top of the Primeira Liga table.

With stakes still high at the Estádio Municipal de Braga, the 'Bracarenses' welcomed Vitória for an oft-emotional Minho Derby in their quest to bridge the gap between third and second, meanwhile also fending off fourth-placed Sporting.

Main man Dyego Sousa came close to breaking the deadlock for Braga after a brighter start from the hosts, cutting inside from the left before striking just over the bar in the 28th minute.

Ricardo Horta was on hand to land the first blow in the 35th minute, reacting first to a strike from Fransérgio that Miguel Silva was unable to handle, setting up a simple tap-in for the winger to gather up.

A strong finish to the half from Vitória wouldn’t bear fruits for the visitors going into the break, nor would it stifle Braga’s appetite for a second following the interval, as Dyego Sousa came close to doubling Abel Ferreira’s side’s lead with his head.

The striker turned provider in the 75th minute to set Fransérgio through on goal before the midfielder's powerful shot was denied by the near-post. Dyego Sousa returned moments later to fire another header at goal, met by Miguel Silva’s save, as the 1-0 scoreline was maintained through to full-time.

Pencilled in for a night with Boavista at the Bessa, Sporting were tasked with replying to Braga’s earlier win and keep their hopes of a third-placed finish alive.

Boavista defender Neris provided the Lions an unwanted start with an early goal in the 3rd minute, finding a way past Renan Ribeiro with an instinctive outstretched leg at the back-post from a set-piece.

Marcel Keizer’s men cancelled the early goal out in the 17th minute following Raphinha’s purposeful run down the right, aiming a low cross into Marcos Acuña that would instead be turned into his own net by the desperate Edu Machado.

A glorious opportunity fell Luiz Phellype’s way in the 25th minute, deputising for the absent Bas Dost, but the Brazilian striker failed to convert his first goal in Sporting colours with a back-post header slamming against the post from close range.

Sporting’s search for a winner was dragged into the second period as headers from Raphinha and Sebastian Coates threatened Boavista’s goal without reward. An acrobatic effort from Bruno Fernandes in the 68th minute edged the Lions closer to a second, leading to Rafael Bracali’s expert save.

Pressed for time, a controversial penalty in the 91st minute offered Bruno Fernandes a clearer route to all-three points from the 12-yard-mark. The goal-laden midfielder made no mistake from the spot, securing an important victory for his team.

On a high after midweek success against AS Roma in the UEFA Champions League, Porto were out to put their sky-high morale to good use and embroil themselves back in the fight for the title, as point-hungry Feirense welcomed them to the Marcolino Castro Stadium.

Against the odds, it was in fact the bottom-placed side who took the lead early in the 4th minute, as one of Wednesday night’s heroes, Felipe, introduced the ball into his own net for an own goal.

Porto’s reply came in the 18th minute through Danilo Pereira, climbing high at the near-post to glance on Jesús Corona’s corner and level the score.

A set-piece was at the origins of the visitors’ second goal in the 34th minute, with Alex Telles feeding the ball back into the box, with Feirense’s attempted clearance providing Pepe with the chance to strike low into the bottom-right corner.

Tiquinho Soares came closest to adding to the score on the brink of half-time after a big save from Caio Secco, whereas Feirense nearly lit up the second period with a very late effort on the volley from Briseño, roaming just wide to conclude a 2-1 away win for Porto.

Dinamo Zagreb were able to take some shine away from a blistering start for Bruno Lage at the helm of Benfica, inflicting a 1-0 Europa League defeat on the Eagles last Thursday, but it was back to domestic action on Monday night versus Belenenses at the Estádio da Luz.

Clássico hero Rafa Silva came inches away from giving the table-toppers the perfect start after striking the ball just wide of the target in the 3rd minute. It was João Félix’s turn in the 38th minute, but he too failed to find the target with a shot from outside of the box, with the Eagles taking a 0-0 draw into the break.

Jonas, deputising for the injured Haris Seferovic, solved the issue ten minutes into the second period, taking in André Almeida’s cross before finding the back of the net on the half-volley.

A deflected volley from outside of the box by Andreas Samaris doubled Benfica’s lead before Belenenses reinstated the pressure with their first through Diogo Viana, making it 2-1 in the 68th minute with a deep free-kick fired into the box that Vlachodimos badly misjudged.

Another big mistake at the back, this time from Rúben Dias, enabled in-form Kikas a chance to equalise in the 70th minute, with the forward doing just that when bending a shot past Odisseas Vlachodimos and making it 2-2.

The likes of Jonas and second-half substitute Jota tried to push Benfica back in front but both, ultimately, proved incapable of preventing a draw that sees Porto catch-up with the Eagles on 60 points.

You know when a manager puts a weaken side in the Europa League so he can put a stronger side in the Liga so he can win the game? well that didn't happen for Bruno... sure makes for interesting last 9 games given the fact Braga is still only 5...

You know when a manager puts a weaken side in the Europa League so he can put a stronger side in the Liga so he can win the game? well that didn't happen for Bruno... sure makes for interesting last 9 games given the fact Braga is still only 5 points away, I don't see Braga winning the title but they can certainly still steal 2nd place.

Didn't watch Porto's game so I can't comment, Couldn't watch the entire game of Benfica only the last 15 mins so I won't comment on performance.

Boavista were robbed, that was never a penalty, game was a balanced game and a draw was definitively the just result. Really hope Sporting can improve this defence next year and hopefully before Benfica v Sporting in the Taca next month

Two horrendous errors and poor finishing cost Benfica what was a comfortable match.

Joao Felix also made some questionable decisions in the final third. Shooting from low percentage positions. Very strange game to watch as I still have no clue...

Two horrendous errors and poor finishing cost Benfica what was a comfortable match.

Joao Felix also made some questionable decisions in the final third. Shooting from low percentage positions. Very strange game to watch as I still have no clue how Belenenses escaped with a draw.


I eagerly await -Z- comments on the worst call of the season resulting in an unjust penalty for Zborting. Boavista was robbed.