Benfica and Porto learned of their European fates after the Champions League and Europa League draws took place in Nyon today.

Porto were handed a tough draw in the Champions League quarter-finals after they eliminated Roma in the round of 16. Sergio Conceição’s side will take on Jürgen Klopp’s Liverpool in the quarter-finals once again.

It will be tough for Benfica too, who face Eintracht Frankfurt - and some familiar faces - after eliminating Dinamo Zagreb last night.

Porto and Liverpool met in the quarter-finals last season, as Porto will remember all too well. Although the two sides drew 0-0 in the second leg at Anfield, the damage had already been done when Liverpool won 5-0 in the Estádio do Dragão with goals from Mohammed Salah, Roberto Firmino and a hat-trick from Sadio Mané on the night.

Conceição was keen to learn from last season’s mistakes. “We will prepare and understand what we did wrong last year,” he said in reaction to the draw, although he emphasised that Saturday night’s match against Marítimo is the most important game to focus on for now.

Jürgen Klopp didn’t seem to think the 5-0 last year would be indicative of the upcoming games; "[the result] was a strange one; it was very good for us, of course, but it was a strange one. In the second leg [0-0 at Anfield], we saw the character of Porto and the quality they have.”

However, should Porto pull off a shock result then they would face another daunting task in the semi-finals against the winner of Barcelona and Manchester United. Meanwhile, should Cristiano Ronaldo’s Juventus defeat Ajax then they will face either Manchester City or Tottenham Hotspur in the other semi-final.

Porto will begin the quarter-finals at Anfield on the 9th April with the second leg taking place on the 17th April at the Dragão. 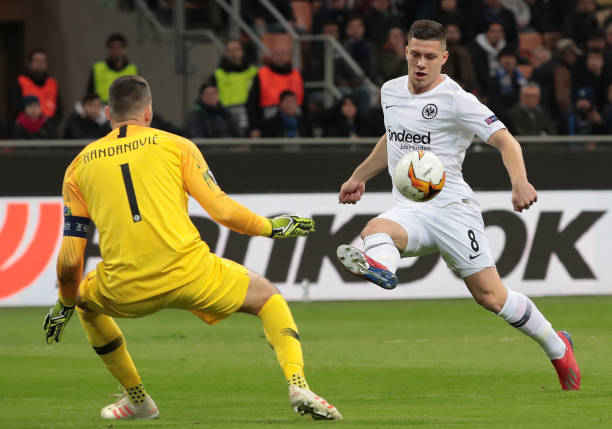 Many Benfica fans will still be thinking about last night’s Grimaldo wonder strike that finished off Dinamo Zagreb in extra time. However, they will be facing a familiar foe when they meet Eintracht Frankfurt and their star man, Luka Jović, in the Europa League quarter-final.

This will be a first ever encounter between the two sides. Former Benfica defender Luisão was representing his club at the draw in Nyon, he described the tie against Eintracht as ”another difficult game”.

“They have a former player of ours, Jović, who left here young and we know we will have more difficulty ahead.” Indeed, the 21-year old Serbian striker (who is, of course, on loan to Eintracht from the Eagles) was the match-winner as Eintracht dumped Internazionale out of the Europa League. That goal was Jović’s 22nd in a season where he has caught the attention of many of Europe’s elite clubs.

Although a former Porto man, Gonçalo Paciência, could be another potential thorn in the side for Bruno Lage’s team as he looks to be finding his feet in the Bundesliga recently.

Should Benfica progress to the semi-finals they could face either Slavia Prague, or more likely, a tough tie against Chelsea.

Valencia's Europa League hero Gonçalo Guedes set up a tasty local derby against Villarreal after his late winner against FK Krasnodar. The winner of that game will face the winner of Arsenal and Napoli in the other semi-final.

Benfica will host Eintracht Frankfurt on the 11th April before the trip to Germany on the 18th April.

I'd be happy with a Porto Juventus final

I was hoping Porto would get one of Ajax, Man United, or Tottenham. I'm sure they'll put up I fight, but defeating this Liverpool side over two legs is quite the ask.

I think Benfica is fully capable of defeating Eintracht Frankfurt over two...

I was hoping Porto would get one of Ajax, Man United, or Tottenham. I'm sure they'll put up I fight, but defeating this Liverpool side over two legs is quite the ask.

I think Benfica is fully capable of defeating Eintracht Frankfurt over two legs if Bruno Lage opts to go with his strongest 11. I wouldn't say Benfica is the favorite (especially because the second leg is in Germany), but I'd rather play Eintracht than either Chelsea or Napoli, so all in all a good draw.