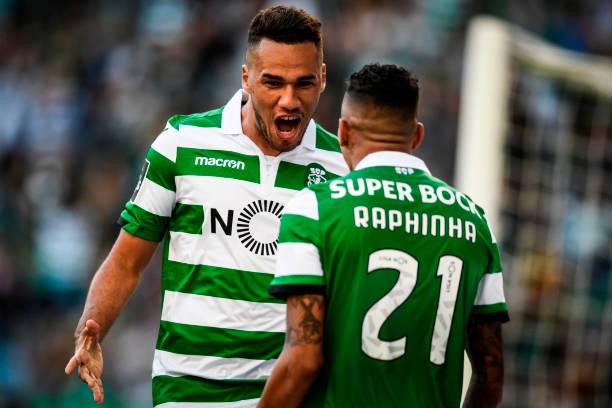 Sporting claimed its first set of consecutive victories with a 3-1 away triumph against Portimonense, this Sunday, capitalising on Benfica’s 2-0 defeat to FC Porto in Saturday’s ‘Clássico’ to rise above both rivals and top the Primeira Liga table, alongside Famalicão.

Two strikes in the opening five minutes set the Lions up for victory prior to a prompt response from the home side in the first half. Completing a brace, Raphinha sealed all three points for Sporting in the second period.

Sporting de Braga came close to joining the title hopefuls in victory later that night, but a late equaliser, in a game marked by a power outage in Barcelos, saw Gil Vicente claw a deserved point to draw 1-1 via Sandro Lima’s goal. PortuGOAL brings you the action coming out of Matchday Three.

After a rocky approach to the 2019/20 season, Sporting came into their clash versus Portimonense knowing that a win could catapult them to first place, as they aimed to seize the opportunity without the Germany-bound Bas Dost.

A moment of magic from Raphinha in off the right flank, curling a strike out of Ricardo Ferreira’s reach and into the top corner, fuelled the Lions’ evening as early as the second minute.

Sporting doubled up just three minutes later as Bruno Fernandes set Luiz Phellype up for a simple tap-in but, with only nine minutes on the clock still, Portimonense’s Rômulo was on hand to halve the Green and Whites’ advantage from the penalty spot.

Iury Lirio neared the equaliser for the hosts in the 38th minute with a poorly-executed header from a prime position bouncing wide, ensuring Sporting maintained their slender lead going into the break.

Via Raphinha and a hat-trick of assists for Bruno Fernandes, Marcel Keizer’s men were able to restore a two-goal advantage thanks to the Brazilian’s side-footed volley from close range. The ex-Vitória de Guimarães wide-man could’ve even added a third to his account when bearing in on goal late on, but the inability to keep his strike away from the goalkeeper saw Sporting settle for a 3-1 win.

Live from Barcelos, Braga were out to bounce back from last week’s disappointment at Alvalade with a return to winning ways against Gil Vicente, as the Primeira Liga newcomers eyed up a second big scalp of the season following success at home to Porto on the opening day of the campaign.

The night began to shape up nicely for Braga with new boy Rui Fonte coming into play to assist former Porto man and Rio Ave star Galeno, hitting the opener low and hard from a tight angle in the 6th minute.

Denis was all that stood between Murilo Costa and Braga’s second goal of the night in the 16th minute with an important save, but after a bright start from Ricardo Sá Pinto’s men, not only were Gil Vicente capable of dimming the Arsenalistas’ ascendancy in the game, but so too were the floodlights, as the clash was interrupted early in the second half with a local power outage.

With clarity back among us, Vitór Oliveira’s men emerged firmly as the more threatening of the two sides, going close to equalising through Lino’s left-footed strike from range, crashing against the post with Eduardo beaten.

Lino returned deep into a lengthy period of stoppage time to aim at goal once more, but this time Eduardo was alert to the danger, tipping the strike from the edge of the box just over. The 109th minute wasn’t such a good look for the former veteran goalkeeper, however, caught scrambling under a floated cross before Sandro Lima turned a late equaliser for the hosts in at the back-post, as both teams took a point each from a 1-1 draw.

Sporting robbed of a penalty aside from that it was just like Braga v Sporting, Sporting still can't defend but always look dangerous in attack.

all of a sudden sporting and famalicao on top lol. I guess that's why they have to play the games! any predictions for Braga /Benfica?

Haters keep
Hating on Sporting but as long as Bruno fernandes is there we have a chance. He is the best player in the league by some margin.

We have a decent
Team but lack depth. Hopefully we land another striker, fullback , and dm.

Haters keep
Hating on Sporting but as long as Bruno fernandes is there we have a chance. He is the best player in the league by some margin.

We have a decent
Team but lack depth. Hopefully we land another striker, fullback , and dm.

I Doubt it though. It’s absurd how we always wait until the transfer deadline to make deals. Our board is a joke.

Vietto looks good though, he might rejuvenate his once promising career at Sporting.

Luiz Philippe has been a great signing imo. Since he joined SCP last season, he’s scored on a consistent basis. However we need another striker for the squad given bas dost is gone.

Sporting robbed of a penalty as per usual.