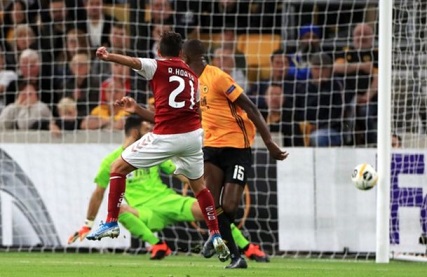 Fonseca off to a flyer, Dalot back, Eintracht woe

It was a night of mixed fortunes for Portugal’s four participants in the Europa League. Pride of place goes to Braga, who travelled to England and came away with a victory against Wolves thanks to Ricardo Horta’s second-half strike.

A brace from Tiquinho Soares was enough for Porto to see off the challenge of Swiss outfit Young Boys, but Sporting and Vitória Guimarães began their campaign with defeats. 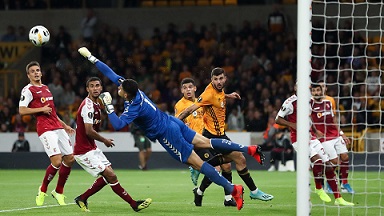 Braga were facing Wolverhampton Wanderers at an opportune time, with Nuno Espírito Santo's side having a very difficult start to the season – still without a win in the Premier League. Meanwhile, Ricardo Sá Pinto's team lost the last two leagues games in a row but much like Wolves, they've looked at their best in European competition this season.

Rui Patrício and Rúben Neves started for Wolves as Nuno Espírito Santo made five changes to his side. There was also a packed Portuguese bench including João Moutinho, Diogo Jota, Rúben Vinagre, and Pedro Neto. For Braga, Pablo Santos replaced the injured Wallace in defence with André Horta also starting ahead of João Novais.

Patrick Cutrone had two great opportunities to put Wolves ahead in a first half without much goalmouth action. At the other end of the pitch, Ricardo Sá Pinto was furious that his side wasn't awarded a penalty after some exceptional dribbling by Wenderson Galeno, which saw him muscled off the ball in the penalty box but the referee wasn't interested.

After the restart, goalkeeper Matheus Magalhães made a fine save to deny Leander Dendoncker, although the Belgian's shot was straight at the Brazilian. The winner came in the 70th minute when Ryan Bennett lost the ball to Galeno on the halfway line. Galeno had plenty of space to run into and found the pass to Ricardo Horta, who was in acres of space and smashed the ball past Patrício. Rúben Neves almost grabbed an equaliser in stoppage time with a trademark long-range strike, but in truth Matheus didn't have to make too many saves as Braga battled their way to an important three points .

Ricardo Sá Pinto was very happy with his side after the game, commenting “this is another historic victory for Braga and for Portuguese football.”

In contrast a dispirited-looking Nuno Espírito Santo said: “We realise the situation we are in. The reality says we are not performing well so we have to analyse and find solutions.”

With Sporting still in a state of flux following a managerial change and a flurry of squad adjustments at the end of the transfer window, it was not the ideal time to play – at least in theory – their most difficult match in Europa League Group D, away at PSV.

Leonel Pontes’ side started promisingly enough, enjoying plenty of possession and doing most of the attacking in the early stages, but alas, Sporting did not waste much time to display the chaotic defending that has become a characteristic of this team over recent months.

While young PSV striker Donyell Malen displayed a good sense of opportunity for the opening goal in the 20th minute, fired in the from the edge of the box, the Portuguese defence was breached all too easily for the second and third goals. A simple pass to former Sporting winger Bruma led to a cross that Coates turned into his own net on 25 minutes, and although Bruno Fernandes pulled one back from the penalty spot before half time, a collective defensive botch-up upon the restart allowed a corner to bobble across the box to Baumgartl who gratefully side-footed into the net to make it 3-1. 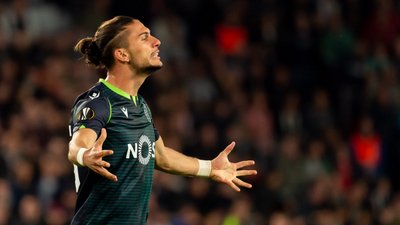 With Sporting all at sea, it seemed inevitable more goals would come for the home side, but to the visitors’ credit they refused to give up the fight and produced their best football in the final 35 minutes, with substitutes Jovane Cabral and Pedro Mendes making positive impacts. The latter scored a sumptuous goal just a couple of minutes after coming off the bench, turning sharply and spanking the ball into the net from 20 yards to give Sporting hope of a draw, and Bruno Fernandes on several occasions and Cabral also came close, but the hosts held on to take all three points.

“It’s unacceptable to concede that third goal,” said captain Bruno Fernandes. “It was a big mistake because the ball went right across the box. We have to correct these things.”

Coach Leonel Pontes said PSV’s finishing was the difference between the teams, while recognising that Sporting are in need of a victory to restore confidence. “What made the difference was PSV taking their chances while we didn’t. We didn’t play against just any team. They have four extremely fast players in attack and they created difficulties for us. It’s urgent for the team to win and stabilise at the emotional level. That’s why we’re going to work hard, to win the next game.” 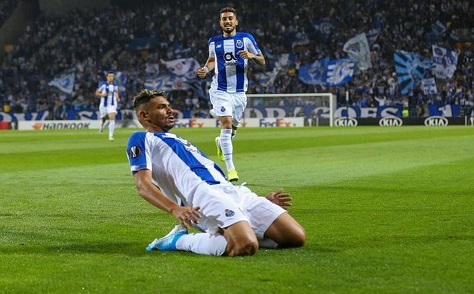 Porto started off their Europa League campaign positively with a win at home to Young Boys, but the Dragons made hard work of it, putting in an unconvincing performance.

Sérgio Conceição’s side played their best football in the first half. A Tiquinho Soares brace, sandwiched by a penalty earned and scored by Nsame, gave the hosts the lead at the break, and it could have been more as Danilo’s header thudded against the post.

The second half was a different story, with Porto increasingly retreating into their shell and Young Boys causing problems with a physical approach that the home team found hard to live with. It needed a superb reaction save by Marchesin with his legs to secure the lead and the three points for Porto. The most important thing was to get off to a winning start in the competition, but the Blue and Whites will surely have to improve against theoretically more challenging opponents to come: Rangers and Feyenoord.

“We started well, against a team that had not lost this season,” explained Conceição. “They are a physically strong team, who play very directly. The first half was good, without being spectacular.”

The coach was keen to praise his substitutes, saying: “The two kids, Romário [Baro] and Fábio [Silva] did very well when they came on. Manafá did too. Tiquinho hadn’t played yet this season, but he gave a good response. In other words, we’ve got a strong squad, a squad that believes in what it is doing. Often you can’t be spectacular, but what matters is the three points. We know we played a good team and as Abel said, sometimes to dance you need a good partner.”

Vitória came into this one with a confidence-boosting 5-1 win over Aves in their last game and, while they have an incredibly difficult Europa League group, they must have felt that games against Standard Liege was their best chances for getting points.

Ivo Vieira's side played well in the first half, preventing the Belgian side from making many chances. And they looked in the ascendancy after the break as the Minho side started to create more but then luck turned against the Portuguese outfit. Guimarães were very unfortunate in the manner in which the first goal was conceded. A cross from the right in the 66th minute was blocked by Florent Hanin but with Miguel Silva already preparing to go into position for the cross there was little he could do to prevent the ball from trickling into the net.

The second goal was another mistake from a Guimarães player, although this one was more foolish than Hanin's previous misfortune. Edmond Tapsoba failed to clear his lines with what should have been a simple header allowing Paul-Jose Mpoku to steal the ball and finish pass Miguel Silva. It was a harsh result for Vitória, and it gets no easier as they next have prepare to host Eintracht Frankfurt.

Ivo Vieira was unhappy with his teams display in the final third of the pitch. "There were some good times, but we were unable to score or create many opportunities," he said. "Now we go back, rest, and try to understand where we can do better and prepare the team for the next match."

Portuguese Abroad round-up: Dalot returns, Fonseca off to a flyer

As ever there is a wide array of Portuguese talent on show outside of those teams from Portugal on matchday one of the UEFA Europa League.

Diogo Dalot returned to the starting line-up for Manchester United’s opener at home to Astana. Dalot had an okay game, defending well when called upon and earning his side a 0-0 in a 1-0 win but it’s clear he’s going to need a run of games to get into a consistent rhythm. There were opportunities for Dalot to push further up the pitch than he did given how defensive Astana were at times, but given that he is a defender returning to the side after a lengthy injury it’s safe to presume he wanted to remain conservative and ensure a clean sheet and a solid defensive display which could have been jeopardised had he been caught further up the field. 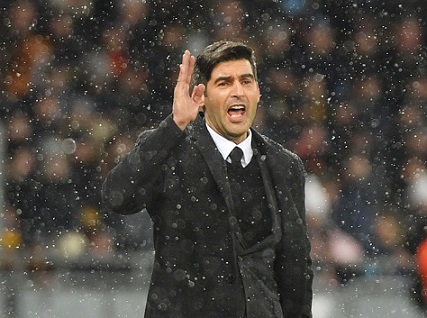 Paulo Fonseca’s AS Roma carried their unbeaten form from Serie A into the Europa League and handed out a 4-0 battering to Basaksehir. They were given a 1-0 lead in the first half courtesy of an own-goal but it was the second half where Fonseca’s side really upped the gears, adding another three goals in 30 minutes courtesy of Džeko, Zaniolo and Kluivert. Bologna are up next for AS Roma in Serie A as Fonseca will hope to continue bringing positivity to the club.

In Germany, Eintracht Frankfurt went with André Silva to lead the line as top scorer Gonçalo Paciência took a place on the bench, but it was miserable night for the Germans and their Portuguese representatives against Arsenal, which ended with a 3-0 home defeat. The first half ended with the Londoners 1-0 up after a Joe Willock goal, but there could have been more goals at either end. André Silva managed to get off 5 shots, 2 on target and tried throughout the game to make things happen. He ended with the highest rating of any Frankfurt player, earning himself a 7.4 score. Paciência came on in the 66th minute but was largely ineffectual, having just one shot on target.

[Statistics and ratings courtesy of SofaScore]

Tom, how long does Nuno have before the ax?One, two more games maybe?

Hi Angelo, I think that would be harsh. He's had two years of incredible success and even this season apart from the Braga result Wolves have done very well in Europe. Perhaps if they are really struggling in the relegation zone at Christmas it's...

Hi Angelo, I think that would be harsh. He's had two years of incredible success and even this season apart from the Braga result Wolves have done very well in Europe. Perhaps if they are really struggling in the relegation zone at Christmas it's a possibility - I'd be surprised if Nuno got sacked before then.

I would say he’s only get sacked if the team is relegated at the end of the season. He’s very popular with the fans

Lou
There are no comments posted here yet