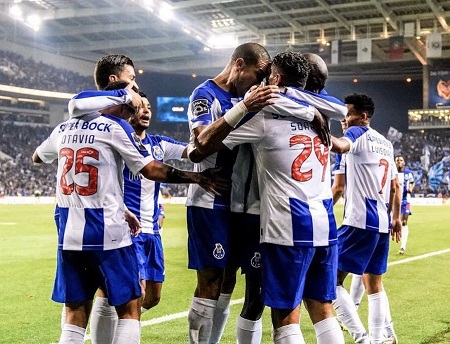 Porto overtook Benfica at the top of the Primeira Liga after a 3-0 win against Famalicão at the Estádio do Dragão. Sérgio Conceição made alterations to his side that had a positive impact, but the Dragons were largely gifted all three goals that came directly from terrible Famalicão turnovers.

Porto manager Sérgio Conceição made three changes to the side that drew 1-1 against Rangers in the UEFA Europa League. Moussa Marega was unavailable with Alex Telles and Zé Luís on the bench, in came Chancel Mbemba at right-back, Wilson Manafá at left-back and Tiquinho Soares up front.

All three players performed well with Manafá awarded man of the match and Tiquinho showing he can be an important option up front. More importantly than the three players coming into the team however, it was two players that remained in the starting line-up that benefited from positional switches.

Jesús Corona has largely been deployed at right-back this season, but he was back on the wing here and heavily involved throughout. The Mexican narrowly missed two good chances to score but was on the spot to assist Luis Díaz for Porto’s opening goal. Keep an eye on Corona in the coming months.

Otávio is a curious player who can play in a number of positions but it’s unclear which is his best. The Brazilian played in an attacking midfield role against Famalicão and made the interception that led to Porto’s opener. It was a much improved performance from the one against Rangers where he was positioned on the right-wing, Otávio benefitting from the freedom afforded to him in the #10 role and making some important challenges on the defensive end.

Fábio Silva turned 17 in July and has been getting limited minutes off the bench, earning starts against Santa Clara in the Taça da Liga and Coimbrões in the Taça de Portugal. He replaced Tiquinho in the 86th minute and almost scored with his first touch after dragging an effort narrowly wide.

Silva's persistence was rewarded as he capitalised on a goalkeeping blunder from Rafael Defendi to score his first senior goal at the Dragão. A moment to savour for the youngster and hopefully many more goals to come.

Porto failed to get into the UEFA Champions League group stage and lost their Primeira Liga opener at Gil Vicente, but they have battled back and sit top of the pile in Portugal. A 2-0 defeat at Feyenoord and 1-1 home draw against Rangers wasn’t ideal but they still have a good chance of getting out of Group G in the Europa League.

One Porto supporter went ballistic after Tiquinho put his side in front as he raced up to the press area to berate the journalists. Clearly unhappy about some of the reporting about his beloved Dragons, hopefully he has calmed down and realises his side have a long way to go domestically and in Europe.

Pepe was beaten by Anderson Silva early on but he recovered well and won the battle with Famalicão’s 21-year-old Brazilian striker. Many have been waiting for a downturn in form but Pepe has shown that age is just a number.

The 36-year-old made a crucial challenge on Fábio Martins in the second half and his positioning continually makes up for any decline in pace. It’s great news for Portugal who will need the centre-back at his best if they are to successfully defend their European Championship crown next summer.

Famalicão architects of their own demise

Famalicão’s Patrick William had a nervous start to the match, losing possession twice with Porto failing to capitalise. Rafael Defendi made two big saves to keep his team in the match but Famalicão’s insistence on playing the ball out from defence backfired at the Dragão.

Learning experience for João Pedro Sousa and his young side

Famalicão have been a big talking point in Portugal after some sensational recruitment and sharp appointment of manager João Pedro Sousa. They led the Primeira Liga coming into the round and despite the defeat only trail Benfica and Porto by two points.

Fábio Martins tested Marchesin early on and shot over the bar a minute later, but attacks were few and far between with Famalicão never seriously threatening Porto. The visitors tightened up their defence that was wide open and extremely vulnerable to the counter attack, but they shot themselves in the foot by gifting Porto all three goals.

Famalicão and Sousa will learn a lot from this match. With three winnable home matches scheduled before the winter break, Famalicão are in a great position to continue shaking up the establishment in Portugal.

Sporting won big, but no news of that though. Great reporting O'Portogoal "Benfica's PR Firm." Does LFV pay you all as much as he does the refs?

Article is about Porto beating the league leaders. The heck is going on here?

Sporting is in 4th with 14 points.

I have nothing against Sporting but I didn't watch them play this week.

Mathew, my comment was not directed towards you or the article (which is well done)

Portugoal will probably release an article saying Sporting won but was lucky.

There are no agendas here, Tom supports Sporting and I used to support Sporting before deciding not to follow any one club.

This season Sporting were smashed 5-0 by Benfica in the Super Cup, have lost at home against Rio Ave (twice), Famalicão...

There are no agendas here, Tom supports Sporting and I used to support Sporting before deciding not to follow any one club.

This season Sporting were smashed 5-0 by Benfica in the Super Cup, have lost at home against Rio Ave (twice), Famalicão and were knocked out of the Cup at Alverca. It's absolutely clear that they have been carried by Bruno Fernandes for more than a season.

I will watch the Tondela match today and try and come up with some positives to please the Sportinguistas.

Sasso
This comment was minimized by the moderator on the site

Not sure if Sérgio Conceição is a good coach or not. On one hand he makes Porto tough without great players but on the other hand the team is very inconsistent and has many bad days. Vamos a ver...

Yah thats a fair assessment, in the same camp here. Not sure what to make of Conceicao still...