Porto overthrow Famalicão at the top; joy for both Benfica and Sporting 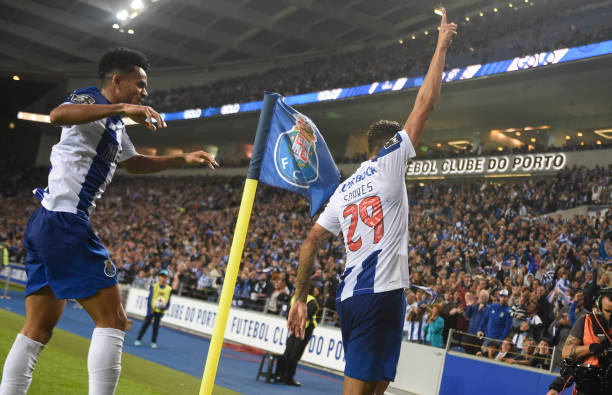 Primeira Liga high-flyers Famalicão have been knocked off the top of the table after succumbing to their first loss of the season, against FC Porto, in a 3-0 defeat at the Estádio do Dragão.

The newly-promoted outfit saw top-spot first come under threat after Benfica opened up Sunday’s set of fixtures with a narrow 1-0 victory away to Tondela. Porto then dragged Famalicão back down to reality with a dominant display, utilising goals from Luis Díaz, Tiquinho Soares and the young Fábio Silva to make first place their own on Sunday night.

Sporting and Vitória de Guimarães brought the night to a close in Lisbon, with the Lions skating past any additional pressure to defeat the ‘Vimarenses’ 3-1 at home. PortuGOAL brings you the peak of this weekend's action.

After Benfica grabbed their first victory in the UEFA Champions League versus Olympique Lyonnais, Tondela were out to draw inspiration from the Eagles and attempt to secure their first set of three points at home, this season.

The hosts threatened Odisseas Vlachodimos’ goal early within the opening ten minutes, drawing saves out of the Greek shot-stopper from the edge of the area via Denílson and António Xavier.

Benfica replied from a set-piece with great effect, however, as Ferro placed Bruno Lage’s men a goal ahead in the 19th minute with a header low into the bottom-left corner, marking the difference between the two sides through to half-time despite Denílson’s best efforts at the other end.

A more muted second half favoured the visitors en route to another victory for Benfica, making it seven from a possible eight in the Primeira Liga.

Yet another huge night for Famalicão saw this season’s Liga NOS sensation take on another huge test, this one at the Estádio do Dragão, with first place and an unbeaten record on the line.

The Dragons kept Rafael Defendi busy in the early exchanges of the game, finding a way through only on the brink of half-time through Díaz, slotting a shot past the goalkeeper from inside the box after combining with Jesús Corona on the break.

Soares chipped in after yet another strong start to the half from Sérgio Conceição’s men, with the Brazilian striker rounding Defendi and slotting the ball into an empty net in the 72nd minute.

Defendi was caught in all kinds of trouble with two minutes of time to go, losing out to high pressure from the Porto front-line prior to Fábio Silva’s first ever league goal, making him Porto’s youngest ever Primeira Liga goalscorer at 17 years of age. The 3-0 win takes Porto up to first place, level on points with Benfica, as Famalicão slipped down to third.

In a clash between two of Portugal’s Europa League representatives, Sporting’s task was to put on a convincing display in front of their less-than-satisfied home crowd, meanwhile Vitória were out to prey on the Lions’ frailties and bounce back from their valiant defeat to Arsenal in midweek.

The two went toe-to-toe in a cagey opening half-hour or so before Jesé Rodriguez, one-on-one with the goalkeeper, stepped up to the plate by grabbing his first goal in Sporting colours, breaking the deadlock in the 29th minute.

Vitória were hit with a second swoop soon after in an attack led by Luciano Vietto, releasing Marcos Acuña down the left channel before the wing-back could outsmart the guessing Miguel Silva between the sticks and beat the seated goalkeeper at his near-post, 32 minutes in.

The visitors replied via Davidson’s strike from range shortly after, leaving Renan Ribeiro beaten before crashing against the woodwork, as Sporting took a 2-0 lead into the half-time interval.

Just as fatigue threatened to set into Vitória’s game, Léo Bonatini emerged to claw a goal back for Ivo Vieira’s team in the 66th minute, tapping in from close range following Acuña’s fatal interception inside Sporting’s six-yard-box.

Sebastian Coates was on hand to restore the Green and Whites' lead in the 74th minute, following up an initial header that landed Miguel Silva, once more, in hot water, spilling the effort for the Uruguayan defender to eventually turn in with relative ease.

The two-goal-advantage was enough for Silas’ men come full-time, climbing all the way up to fourth place, ahead of Vitória, with only their fourth league win of the season.

Miguel Silva might be the worst keeper I have seen in the liga for a decade. Dreadful keeper.