Benfica move into first after Porto slip-up in Madeira, amidst wins for both Famalicão and Sporting 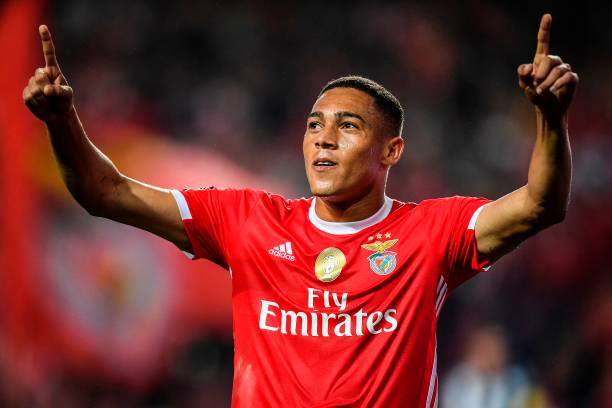 Benfica have moved into pole position in the Primeira Liga after putting four past Portimonense at the Estádio da Luz, taking advantage of FC Porto’s slip-up in Madeira, earlier on Wednesday evening.

The Dragons were a goal down for much of the contest away to Marítimo, managing only to claw a goal back late on to share the spoils in a 1-1, enabling Benfica to overtake them with a victory.

Bruno Lage’s men didn’t disappoint in front of their home crowd, treating them to a 4-0 win that sees them go two points clear of Porto at the top of the table.

Elsewhere, Famalicão bounced back from their first loss of the season by defeating Gil Vicente 2-1 at home and firm up third place, whereas Sporting required a late penalty from Bruno Fernandes to make it five wins from six in all competitions under new boss Jorge Silas. Here’s the round-up of Matchday 9.

Sérgio Conceição’s men came into the week on the right foot, toppling Famalicão at home to make top-spot their own, but they’d be forced to fight for their position at a ground in which they’ve dropped points in four of their last six visits, as Marítimo welcomed them to the Estádio dos Barreiros.

Marítimo’s Franck-Yves Bambock set the tone for the evening in the 11th minute, slamming home a closely-watched first-time volley after Porto failed to clear their lines when defending a corner.

Porto replied through Luís Díaz’s vicious half-volley inside the box, requiring a double-save from Amir Abedzadeh to initially take the sting out of the strike and then prevent the effort from creeping over the line.

The visitors’ equaliser came as late as the 84th minute, with Tiquinho Soares heading the ball onto teammate Pepe, unaware of the ball’s whereabouts before it narrowly crossing the line.

Soares saw the chance to become a hero evade him cruelly in the 91st minute, arriving dangerously at the back-post from a corner to meet a flick-on that would lag behind him, eventually surrendering two points upon the full-time whistle.

Murmurs of wanting to see more and better have followed Benfica for much of this early start to the season, but in Portimonense’s visit, following Porto’s blip versus Marítimo, the Eagles had the opportunity to lift the mood at the Estádio da Luz.

Portimonense commenced well but it was André Almeida who’d leave the first conclusive mark on the game in the 18th minute with a back-post header, nestling into the top corner. A second set-piece saw Benfica double up coming into the second period, with Rubén Dias contributing in front of goal from Alex Grimaldo’s cross.

Vinícius, leading the line on the night for Benfica, added greater comfort to the score-line with the Eagles’ third in the 63rd minute, bearing down on goal before taking it around Ricardo Ferreira between the sticks and slotting the ball into an empty net.

The Brazilian striker was on hand to secure a brace just three minutes later, receiving Chiquinho’s pass with a first-time left-footed finish to make it 4-0, subsequently powering Benfica back up to first place.

Watchful eyes were on Famalicão on Wednesday night as they bid to bounce back from their first loss of the season, welcoming Gil Vicente to the Estádio Municipal in a clash between two of the newly-promoted sides.

Toni Martinez was the first to land a lasting blow in the fixture, reacting first inside the box in the 21st minute to put the hosts a goal up against Vitór Oliveira’s visiting side.

The ex-Valencia and West Ham United striker could and should have made it 2-0 to Famalicão in the 32nd minute after somehow heading the ball into the goalkeeper’s grasp from close range with the entire goal at his mercy.

Anderson grabbed the second goal Famalicão’s dominance deserved in the 80th minute, helping the hosts onto victory prior to Sandro Lima’s consolation goal for Gil Vicente late on, concluding a 2-1 score-line.

A foggy, rainy night rolled the carpet out for Sporting at the oft-dreaded Mata Real stadium, as Jorge Silas’ put plans in place to come away from the Porto district unscathed against Paços de Ferreira.

To go with the theme of Halloween, it was Sporting’s Luiz Phellype who popped up to haunt his former club in the 11th minute, opening the scoring with an outstretched leg to volley in Bruno Fernandes’ in-swinging cross.

The visitors protected their lead through to half-time before Bruno Santos came close to cancelling Sporting’s advantage a minute into the second half, cutting in for a low-driven strike on his left foot prior to Renan Ribeiro’s fingertip save.

Paços promised more in the second half and found themselves an equaliser in the 74th minute through Douglas Tanque, rising between two markers to head past the Sporting goalkeeper.

The hard work was soon undone by Luiz Carlos inside the hosts' box, however, as the midfielder inexplicably reached out for Bruno Fernandes’ free-kick with his hand, gifting the Lions captain the chance to place his team back in front from the spot.

Bruno Fernandes made no mistake from the 12-yard-mark, aiming his 79th-minute penalty low into the right corner to earn Sporting a 2-1 victory away from home.

That was the best performance I've seen from this Benfica side since mid August.

I really liked the look of the Vinícius/Chiquinho front two.

Chiquinho may not be the flashiest player in the league, but his football IQ is through the roof....

That was the best performance I've seen from this Benfica side since mid August.

I really liked the look of the Vinícius/Chiquinho front two.

Chiquinho may not be the flashiest player in the league, but his football IQ is through the roof. His ability to make the right decision each in every time he receives the ball in the final 3rd is second to none on this team.

Vinícius just oozes confidence every time he steps on the pitch. He's deceptively quick, his hold up play is excellent, and he seems the score a goal whenever he's on the pitch.

I totally agree jon,usa. Surely Bruno Lage can't continue starting Seferovic over Vinicius, after what we've seen from the Brasilian in recent weeks and especially in the game the other night. He looks by miles the best option to play CF for us....

I totally agree jon,usa. Surely Bruno Lage can't continue starting Seferovic over Vinicius, after what we've seen from the Brasilian in recent weeks and especially in the game the other night. He looks by miles the best option to play CF for us. Dynamic movement, makes things happen up front and a deadly, confident finisher in the box. Simply has to be the starter at number 9 from now on, no argument.

Really liked Chiquinho's performance too. Real bonus how he's recovered from his injury way before expected, and especially with Rafa out now. Chiquinho is a very dynamic and clever player, with great movement and link up play. He is the obvious choice to replace Felix in that position of second forward if Lage continues with the 4-4-2. But he also seems versatile enough to play in other positions in the final third, such as the number 10 in a 4-2-3-1 (which is where I'd play him in the Champions League matches) or even on the left (in place of the injured Rafa). So he gives us a lot more options in attack.

On the whole, an encouraging display from Benfica, harking back to the second half of last season, and hopefully we are going to see more performances like that.