Porto break Alvalade hoodoo to keep in touch at the top 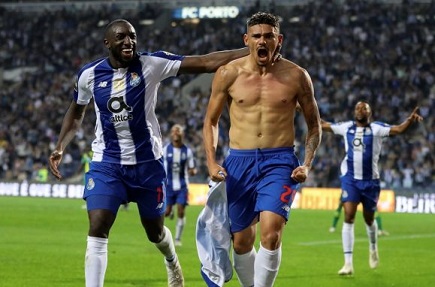 The first Clássico of 2020 provided rich entertainment for the 41,247 crowd at Alvalade. A cagey first half ended all square after Marcos Acuña's stunning angled shot cancelled out Marega's early effort.

The hosts came out all guns blazing in the second half, with chance after chance created, but Vietto, Luiz Phellype and Bruno Fernandes could not convert their opportunities, and were punished when Tiquinho Soares rose high to head in the winner for Porto.

Benfica's win at Vitória de Guimarães last night had put pressure on Porto to get the three points as they attempt to chase down the Eagles at the top of the table, and the visitors got off to a perfect start. Corona's lovely pass over the top caught out a static Sporting defence, with Marega winning the subsequent foot race. The Malian striker miscontrolled the ball, but in doing so succeeded in wrongfooting Sporting goalkeeper Maximiano and the ball rolled slowly into the empty net. 1-0 Porto.

Defending an early lead, Porto looked comfortable as a cagey period followed with neither goalkeeper called into action. Shoya Nakajima, who seems to have definitively won around Porto boss Sérgio Conceição, was looking lively and fired one effort narrowly over.

To watch match highlights click on the play button below.

Sporting gradually began to get things going in an attacking sense and found and equaliser just before the break. Vietto played a clever diagonal pass to Acuña, who produced a superb rasping shot into the roof of the net from an acute angle. All square going into the interval.

The complexion of the game changed completely in the second half as Sporting came roaring out of the traps. An electric Acuña was playing more as a winger than a left-back as the Lions created a series of clear goal-scoring chances in a dominant 20-minute spell.

Vietto had a hat-trick of near misses, smashing one effort against the post, blazing another over the bar and missing the target when put clean through by Phellype. Phellype himself and Bruno Fernandes also spurned presentable opportunities.

As the Portuguese football saying goes, "quem não marca, sofre" and so it was as Sporting's defence switched off, allowing Tiquinho Soares to rise unchallenged at a corner to head Porto back in front.

Video report of terrific classico at the Alvalade to open 2020. Sporting 1-2 Porto. pic.twitter.com/Ttj3vWySdn

The goal changed the game completely again. Porto were now keeping hold of the ball more easily, and creating more chances of their own, especially through lively substitute Luis Diaz. The Colombian was twice deined by excellent Maximiano saves when he looked certain to score.

Sporting centre-back Coates headed a corner goalwards that skimmed the top of the bar, but there was no further scoring and the Blue and Whites went back home with the three points.

Porto remain four points behind Benfica and very much in the title race. While Sporting can be pleased with the performance, the raw reality is the Lisbon team are consigned to fighting for 3rd place in 2019/20 with less than half of the season gone.

By Tom Kundert, at Alvalade