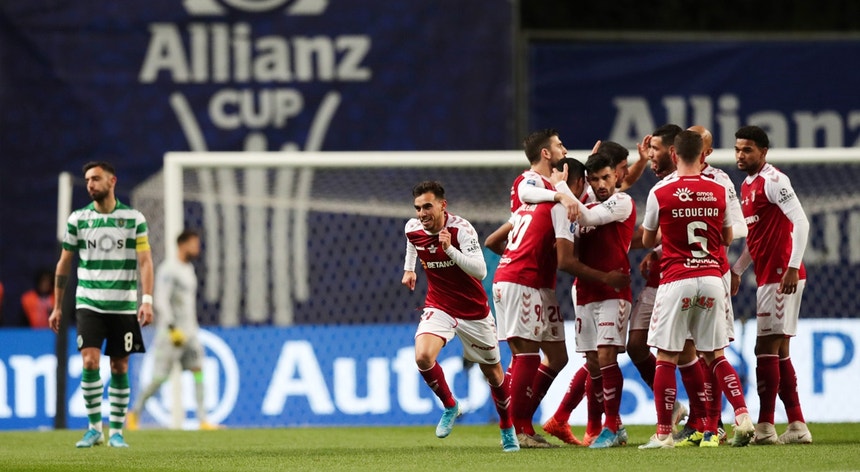 Sporting and Vitória ousted in semi-finals

One week after the two teams met in the Primeira Liga (Braga winning at the Dragão), northern rivals Porto and Braga will go head to head again to decide who lifts the 2019/20 Portuguese League Cup.

Braga, who are hosting the final four stage of the tournament, beat Sporting 2-1 on Tuesday thanks to a last-minute Paulinho goal.

Tonight, Porto beat Vitória Guimarães by the same scoreline, but not without more late drama as Ivo Vieira’s side thought they had equalised in the 95th minute, only for the goal to be ruled out by VAR.

In a repeat of last year’s semi-final, Braga welcomed Sporting to the Quarry. The Arsenalistas were well on top in the early stages, and it was little surprise when the hosts took an early lead, thanks to a wonderful Ricardo Horta goal.

The recalled Rodrigo Battaglia lost the ball in midfield and it eventually found its way to Horta on the right-hand side of the box, who curled a perfect shot beyond the despairing dive of Maximiano and into the corner of the net. With livewire Galeno causing all sorts of problems for Sporting’s back line, Braga pushed forward for a second goal, but were rocked when Sporting scored an equaliser out of the blue.

The ever-alert Bruno Fernandes played a quick free kick to the unmarked Jérémy Mathieu, with the French centre-back calmly beating Matheus to level the scores.

The goal, along with the half-time substitution by Sporting boss Silas, bringing on Bolasie for the ineffective Doumbia, made the visitors more dangerous, and only an excellent reaction save by Matheus prevented a Battaglia header from finding the net. But Sporting suffered a big blow on the hour mark as Bolasie was given a red card after VAR consultation following a clumsy and what was deemed a dangerous challenge on Ricardo Esgaio.

The complexion of the match changed again, with Braga taking complete control and Sporting disappearing as an attacking force. Just when it seemed the Green and Whites would hold on for penalties, Paulinho popped up to head in from close range in the 90th minute. It was all too much for Mathieu, who became the second Sporting player sent off after kicking out at Esgaio.

Braga make the final for the third time, and will hope it’s a repeat of the 2012/13 season when they beat Porto in the final.

The second semi-final proved fantastic entertainment with chances throughout and a dramatic closing act.

Porto dominated the first half, with Mbemba and Marega forcing Vitória goalkeeper Douglas into excellent saves. Vitória posed a threat on the break though, as shown by Davidson’s effort on the stroke of half time that just cleared the crossbar.

The second half is when the fun really began though. After chances had gone begging at both ends, Vitória were awarded a penalty as Tiquinho’s wild clearance in the box caught Bonatini, and the impressive Tapsoba converted the resulting penalty.

Celebrations by the Vitória fans were soon cut short however, as in the very next minute Alex Telles equalised with a stunning low shot from 25 yards that fizzed into the net. Ten minutes later and Porto had turned the match around, good work by Corona down the right wing setting up Tiquinho Soares for his 11th goal in his last 9 matches. 2-1 to Porto with 15 minutes remaining.

Young Porto goalkeeper Diogo Costa saved superbly from Davidson but Vitória weren’t finished, and in the last minute of stoppage time substitute João Pedro found the net to spark wild celebrations among the Guimarães players, coaching staff and fans and we readied ourselves for a penalty shootout.

However, Diogo Costa complained he had been fouled by Pedro, and the striker had kicked the ball out the goalkeeper’s hands, and after checking the pitchside VAR screen the referee agreed and the goal was chalked off. Looking at the replay it appeared the right decision (make your own mind up by watching the highlights above).

The Taça da Liga final between Braga and Porto takes place on Saturday, kick-off at 7.45 pm.

Braga are such a despicable team, two men more and they go into the corner and waste time how completely insulting to everyone watching that game. Porto or Benfica would've given Sporting respect and gone after the 3-1 but Braga is a club with no...

Braga are such a despicable team, two men more and they go into the corner and waste time how completely insulting to everyone watching that game. Porto or Benfica would've given Sporting respect and gone after the 3-1 but Braga is a club with no respect for football and is easily the team in the league I hope get nothing. I would rather see my team Sporting lose 5-0 to Porto and Benfica on a daily basis than to see them lose to Braga 1-0.

So now we got in the final a despicable club vs a club lead by a very despicable manager. I don't want Porto to win because of their manager but it is the lesser evil than watching Braga win the cup.

I personally don't think Bolasie was a red card, he had made the tackle before Ricardo slipped literally noone complained but VAR got involved so thats why it got a red card. But Mathieu red card was undeniable he simply lost his head but the way Braga acted like it was a horror challenge that could've killed their player just shows the nature of that club making such a massive deal out of nothing.