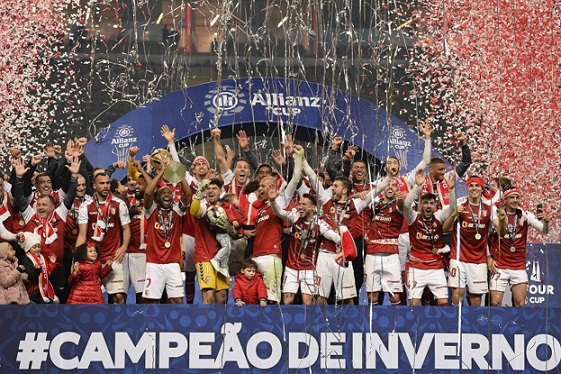 Both sides hit the woodwork and had chances to win it in the 90 minutes. However, it was Braga who snatched the cup with one of the last kicks of the game to win the trophy for Rúben Amorim’s side and continue his dream start in charge of the first team.

The Estádio Municipal de Braga hosted the Taça da Liga final, a rematch of the final in 2013, when Braga lifted their first and only trophy to date.

The Taça da Liga has eluded Porto since its inception, but perhaps revenge for the destabilising league defeat to Braga just over a week ago was more important for Porto’s players. There were no surprises in either of the two line-ups, after some thrilling midweek semi-finals filled with red cards, missed penalties, and controversial VAR decisions.

In theory, Braga were the home side for this one, playing in their own stadium, but of course fan allocation was split equally between the two clubs. The Arsenalistas certainly began the better of the two sides with Ricardo Horta the danger, first hitting the bar after just 5 minutes gone, before having another excellent chance to open the scoring blocked crucially by Alex Telles.

It was an even and entertaining start to the game. Porto got their first sniff of goal when a mix-up in the Braga defence almost allowed Luis Díaz in.

Defender Chancel Mbemba had a great chance to opening the scoring for Sérgio Conceição’s side when he rose highest from a freekick, but his header went just over Matheus Magalhães’ crossbar.

Porto’s best chances of the first half came within seconds of each other. First, Jesús Corona got on to the end of a cross from the left and was able to take the ball down just a few yards in front of the Braga goal. He couldn’t convert from close range and had his shot well-saved by Matheus. It looked like Tiquinho Soares would easily convert the rebound, but he blasted the ball off the bar, giving time for the Braga defence to clear.

Somehow both sides went into the first half with clean sheets, but it had been an absorbing first half of football.

Porto began the second half on top, just as they had finished the first, with Braga looking like they were beginning to get tired. Rúben Amorim made a change early after the restart, with Francisco Trincão coming on for Galeno before quickly being forced into another change as defender Vítor Tormena pulled up with an injury meaning Wallace had to take his place.

Porto still took a firm hold of the game and yet failed to create any clear-cut chances to really test Matheus or the Braga defence. Indeed, the second half provided more yellow cards and niggly fouls then it did goalmouth action.

As the game entered its final stages, Braga’s confidence returned and in stoppage time the hosts hit the bar from Raúl Silva’s header.

It looked like that would be the last chance of the game but for a last gasp goal by Braga’s man of the moment, Ricardo Horta. With just seconds left on the clock, Ricardo Horta did brilliantly to turn after Fransérgio’s deflected shot found him onside and through on Diogo Costa’s goal, despite the Porto defence’s protests. Horta made no mistake from close range and won Braga the Taça da Liga in extraordinary fashion.

Overall I think Braga earned their trophy. They had to get by both Sporting and Porto which is no easy task. Add on the fact...

Overall I think Braga earned their trophy. They had to get by both Sporting and Porto which is no easy task. Add on the fact that the new coach... who is off to quite the start... even if he has had a little rub of luck here or there, but what team doesn’t?

Congrats to Braga, hopefully they can build on this, but as often is the case probably not lol.