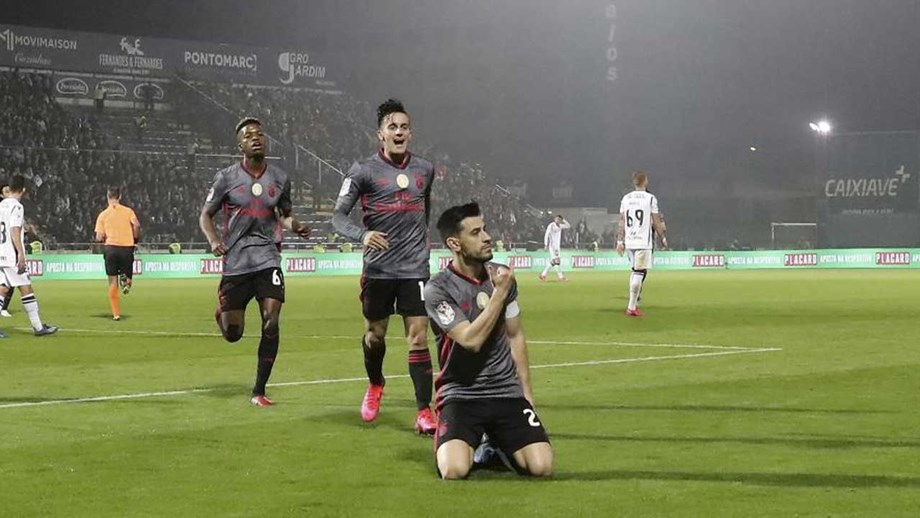 Benfica survived a hard-fought trip to Famalicão to ensure their place at the Taça de Portugal final at Jamor. Pizzi opened the scoring midway through the first half to extend the visitor's lead on aggregate. Famalicão didn’t give up though, having had a goal ruled out by VAR just before the break before Toni Martínez’s late goal gave them hope.

However, it was Benfica who won out over the two legs, setting up a potentially a mouth-watering final with Porto, should they navigate past Viseu tomorrow.

It had been a difficult weekend for both of these two teams. A much-changed Famalicão side was on the end of 7-0 hammering by Vitória de Guimarães that can’t have helped the confidence of João Pedro Sousa’s team going into this game. Benfica meanwhile lost o clássico, allowing Porto to re-enter the title race.

Benfica went into this second leg with a 3-2 advantage, thanks to Gabriel’s late winner at the Estádio da Luz last time out. For Famalicão it would take a monumental effort to overturn the result and book themselves a place in what would be their first ever Taça de Portugal final.

It was a cautious start in Famalicão, with neither side managing to create any clear-cut chances in the first 20 minutes. The only thing that separated the two teams eventually was a mistake by centre back Riccieli who gave the ball away inside the Famalicão half. Benfica were quick to pounce on the mistake and Carlos Vinícius did well to stop the ball from going out. His cross found Cervi who flicked the ball allowing Pizzi the chance to place the ball past Vaná Alves to put Benfica up 1-0 on the night, and 4-2 on aggregate.

Credit must be given to Famalicão as their heads did not drop. Odysseas was needed twice to prevent Toni Martínez and later Diogo Gonçalves from equalising.

Famalicão thought they had the equaliser right before the break only for VAR to step in. A freekick from deep was punched poorly by Odysseas under the challenge of Gustavo Assunção, the ball fell to Patrick William who dug out a lovely chipped finish to seemingly draw Famalicão on level terms.

Benfica players were not happy with the challenge on Odysseas, which was a fair one. It was in fact a 31cm offside call in the build-up that meant Benfica retained the lead going into the half time.

Neither side made any changes at the break and Famalicão continued to try and find a way back into the tie. Pedro Gonçalves most notably had another good chance foiled by Odysseas. Benfica were happy to let Famalicão try, usually forcing the home side to have to shoot from outside the box.

As the clock ticked further down, Benfica looked more and more comfortable but the Liga NOS leaders were not creating chances to put the game beyond doubt.

Famalicão had to wait until the 78th minute before the game was brought into life again. Diogo Gonçalves picked up the ball on the right side after a wonderful pass by Uros Racic and crossed low for Toni Martínez to grab a deserved goal for Famalicão. After another agonising VAR check for the home crowd to endure, this goal was given to set up a potentially exciting finish.

However, the final push for Famalicão failed to materialise and Benfica managed the remainder of the game well to ensure their spot at Jamor.

João Pedro Sousa and his Famalicão side can hold their heads up high after both of these semi-final performances, having really tested Benfica. Bruno Lage’s stubborn side will, short of a big Viseu shock tomorrow, be set to play a clássico Taça de Portugal final for the first time since 2004.

Well we made the final, which is the positive, but that second half was absolute garbage. Those second 45 minutes were painful to watch and is the worse I've seen us play since the days of Rui Vitoria.

Much of the team is looking tired, it was...

Well we made the final, which is the positive, but that second half was absolute garbage. Those second 45 minutes were painful to watch and is the worse I've seen us play since the days of Rui Vitoria.

Much of the team is looking tired, it was noticeable against Porto already and it was so clear last night. Ferro, Grimaldo and Pizzi absolutely need to be rested as they look exhausted (and why wouldn't they, having played virtually every single match this season). I know the next match is a tough one against Braga, but Ferro in particular must be dropped. Samaris may be a DM by trade, but at the moment he's looking like the safer option to play alongside Ruben Dias in central defence.

The positive is we managed to make it to Jamor despite playing so poorly in that second half! Well done to Famalicao, they played well and can count themselves unlucky to have gone out after that performance. What a story they've been this season, totally out of nowhere! Good for our Liga, and they can serve as inspiration to other clubs.