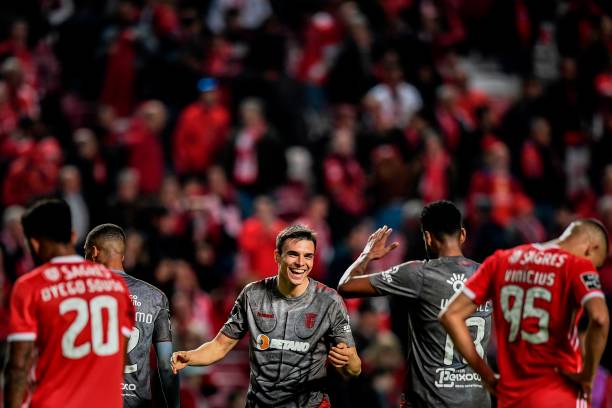 Benfica have seen their comfortable lead at the top of the Primeira Liga table turned on its head after Sporting de Braga stunned the Estádio da Luz into a 1-0 defeat for the hosts.

João Palhinha’s goal on the brink of half time made all the difference in Rúben Amorim’s return to Lisbon, enabling FC Porto to now trail the Eagles by a point after overcoming Vitória de Guimarães, in a game marred by racism, with a 2-1 win.

Elsewhere, in the race for European qualification, Sporting saw third place taken from them after being forced to settle for a 1-1 draw away to Rio Ave, having chased a portion of the game whilst being down to ten men. As always, PortuGoal brings you the best of the action.

Having claimed eight wins from a possible nine, leaving Sporting and Porto down in his trail, Amorim’s next task was a crack at his former club and league leaders Benfica, desperate to shake off last week’s wobble in the ‘Clássico’.

Rafa Silva, also up against familiar faces, sought an immediate impact when pinching the ball off David Carmo and racing through on goal, but the Portuguese winger could then do little else but poke a shot wide whilst under pressure.

Carlos Vinícius wasted a fine opportunity to head home the opener in the 42nd minute, sending Pizzi’s cross over the bar before Fransérgio almost tilted the balance at the other end, prior to Odisseas Vlachodimos’ point-blank save.

Palhinha showed both how it’s done from the subsequent corner, however, nodding past the Benfica goalkeeper to give the visitors a 1-0 lead going into the interval.

Vinícius possessed greater accuracy on the ball in the second period but instead had the near post to overcome in his quest for an equaliser, throwing alarms Braga’s way in the 49th minute.

But the Eagles would get no closer as the half proceeded, opening up the prospect of falling within touching distance of second place following a 1-0 defeat at full-time.

Just three points separated these two outfits going into Saturday's late-night clash in Vila do Conde, with Sporting requiring a win if they were to retake third place from a victorious Braga.

However, having hardly had a kick of the ball, the Lions found themselves a goal down after Chelsea loanee Lucas Piazon added the finishing touches to a first-minute set-piece move.

Quality play from Carlos Carvalhal’s men almost saw them landing a second through Nuno Santos, whereas Sporting were far more pragmatic in their approach, slamming the bar from distance via Eduardo Henriques in the 37th minute.

The visitors’ hopes of a fight-back took a blow in the 70th minute after a second bookable offence from Sebastian Coates, leaving Sporting to attack the remainder of the game with just ten men.

Jorge Silas’ units were just about enough, however, as Yannick Bolasie earned his side a penalty, finished by Jovane Cabral in the 84th minute, to level the game come full time.

All energies were focused on a win in the away corner, coming off the back of Benfica’s inviting slip-up against Braga, but Porto weren’t to have it easy, in theory, against Europa League hopefuls Vitória.

A couple of dangerous crosses served as a warning for Vitória, who’d eventually go a goal down by the 10th minute after Sérgio Oliveira lashed at Zé Luis’ cut-back, cannoning off the bar before being ricocheted in off the home goalkeeper’s back.

In response to Porto’s early lead, Marcus Edwards came close to canceling out Douglas’ unfortunate own goal, with the Englishman’s shot set for goal prior to Iván Marcano’s goal-line clearance in the 18th minute.

Vitória emerged with even greater appetite in the second period, hitting all the right notes in the 49th minute through the ever-impressive Bruno Duarte, taking flight to head in the equaliser.

Marega had different ideas in the face of a brave Guimarães display, holding his run along a high line to bear down on goal and chip the goalkeeper in the 60th minute.

The Malian forward was sucked into the spotlight for all the wrong reasons minutes later, as he succumbed to alleged racist abuse from the stands and demanded to be substituted against his former club.

Jesús Corona could’ve killed the game off in the 82nd minute when blazing a strike over from close range, leaving him and the rest of the Porto band to breathe a huge sigh of relief in the final embers of the game after Davidson’s big chance, wrapping up three crucial points for Sérgio Conceição’s men.

Not going to lie, Sa Pinto wasn't doing great domestically but his form in Europe was incredible. So when Braga made the coaching change to Amorim, I was shocked and thought it was a big mistake.

How wrong I was. Ruben has really been...

Not going to lie, Sa Pinto wasn't doing great domestically but his form in Europe was incredible. So when Braga made the coaching change to Amorim, I was shocked and thought it was a big mistake.

How wrong I was. Ruben has really been collecting some scalps in the league since he started. As a Porto fan, it was a great game to watch.

Braga honestly more than impressive with their new manager, just wow and as much as I despise Braga my hats goes off to them lately they are doing a wonderful liga revival job

Now with Porto's game and the alleged racism against my man Marega,...

Braga honestly more than impressive with their new manager, just wow and as much as I despise Braga my hats goes off to them lately they are doing a wonderful liga revival job

Now with Porto's game and the alleged racism against my man Marega, I personally don't believe that and 'if' but most likely is more than likely is actual racism remarks made against him that those doing it are actually racists but doing it as method of provoking him which still is unacceptable just like they do with Ronaldo by saying Messi, this is clearly deeper than that and they are truly racist people in those stands but I still believe a sizable portion are just doing it to provoke him but how they are doing it is just or even worse than the actual racists there.

'teammates and opponents try to stop him instead of supporting him. He is eventually subbed off and the game continues as if nothing happened. Fuck this.' is a tweet that was retweeted by PortuGoal1

I don't see if as not supporting him against the alleged racists, I believe they are trying to rise above it and show those bellends that are committing this acts that it won't stop them or get to them.

These people that do this want a reaction from those they are abusing and have managed to do so unfortunately. You think by him walking off that will think twice about doing it again? Nah they will be encouraged sadly. Not all players are alike, there was Dani Alves a while back when he just ate the banana thrown at him, if someone threw a banana at Marega he would've reacted differently because everyone is different but nobody should be abused at their work place which is essentially what footballers are doing at the pitch they are working and shouldn't tolerate it, although I don't agree with him walking off the pitch, I can't blame him but I don't think players walking off will solve this but it is undeniably bring the attention straight to the surface in a way that can't be ignored

Also Sporting suck lol but we all know that.