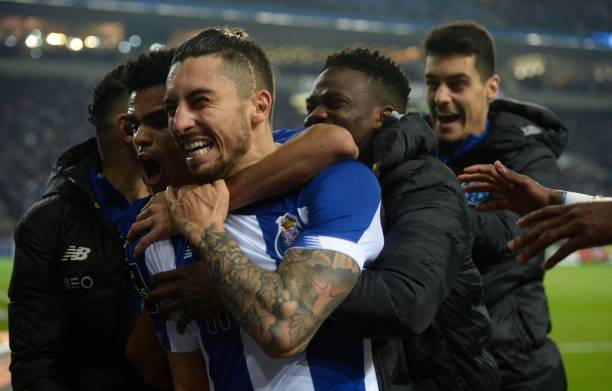 A late Alex Telles wonder-strike has kept FC Porto firmly in the hunt for the league title after claiming a narrow 1-0 win at home to Portimonense, this Sunday.

The Dragons, eager to build on the momentum gained in recent weeks, broke the deadlock as late as the 87th minute at the Estádio do Dragão to ensure, at the very least, that a one-point gap from the top would be maintained.

Benfica took their position back from the Dragons on Monday night, courtesy of a first-half Carlos Vinícius goal that registered a 1-0 triumph away to Gil Vicente, however.

Elsewhere, Sporting followed up on their midweek Europa League success to defeat Boavista 2-0 at home prior to Sporting de Braga’s 3-1 victory versus Vitória de Setúbal, reclaiming third spot. Here’s just how the top four got on.

In response to one of the Lions’ finest performances of the season, defeating Istanbul Basaksehir 3-1 in the Europa League first leg at Alvalade, Sporting were hoping to renew their good form in Boavista’s presence in Lisbon.

Andraž Šporar led by example, having broken his duck in midweek, by diverting Gonzalo Plata’s free-kick and opening his account in the Primeira Liga in the 12th minute.

Plata thought he had doubled Sporting’s lead shortly after before seeing his effort ruled out for offside, but destiny had an even cleaner finish in store for the Ecuadorean to shout about, steering a half-volley into the bottom corner and giving the hosts a 2-0 lead going into the break.

Jovane Cabral scuppered the chance to make it 3-0 in an otherwise uneventful half in front of goal, rounded off with a big save from Luís Maximiano to secure a clean sheet late in the encounter.

In terrific form, Braga’s latest setback against Rangers in the Europa League, after initially leading the Scotsmen by 2-0, served as an intriguing dent for the northern outfit to attempt to gloss over versus Setúbal.

Big chances at either end kept Ricardo Horta and Nabil Ghilas from scoring, with Matheus starring against the latter’s downward header to keep the score level in the opening 20 minutes.

It was a different story in the 41st minute when Ghilas tucked home his one-on-one opportunity, but this time the Algerian forward had the linesman’s flag to stomach, retracting the goal to keep the game poised going into the break.

Horta finally broke the deadlock in the 63rd minute from a Galeno pass, aiming his strike from the edge of the box into the bottom corner, and there was more for Braga to celebrate ten minutes later after Bruno Wilson doubled the hosts’ lead.

Ghilas eventually added a goal to his name to up the nerves in stoppage time before Francisco Trincão rose to the occasion, making it 3-1 to the ‘Arsenalistas’ as late as the 97th minute.

In a night of reunions, Porto were out to put pressure on Benfica’s title charge and, at least momentarily, look after top spot for a night. The Blue & Whites got themselves going with big chances for Jesús Corona and Tiquinho Soares in the first half, forcing Shūichi Gonda into action in the 37th minute.

At the other end, Jackson Martinez was the man looking to cause the problems against his former side with a wayward effort off his head in the 37th minute, just moments before the striker produced an even worse attempt from the penalty spot, striking his attempt over and calling the game at 0-0 once the referee blew for half time.

Luís Diaz could’ve edged the hosts in front following Sérgio Oliveira’s whipped cross, aimed at the back-post, but the Colombian struggled to direct his effort on target with an outstretched leg in the 70th minute.

The stage was then set for Telles to bag all three points in spectacular fashion in the 87th minute, thundering a long-range strike deep into Gonda’s net and clinching an important win for Porto in the title race.

With the heat up following Porto’s late heroics versus Portimonense on Sunday night, nothing but a win away at Gil Vicente would suffice for Bruno Lage and his Benfica side, aiming to take top spot back.

Vinícius was right on cue in the 15th minute, meeting Adel Taarabt’s delivery to head in the game’s opener and ease some of the jitters carried into Barcelos by the Eagles.

The worries almost came rushing back in the 17th minute after Nogueira headed the ball into the mix for Yves Baraye to volley on the turn, missing the target fractionally among a flapping Odisseas Vlachodimos.

Moments before having a goal ruled out for offside, Vinícius could’ve seen the net ripple again after Rúben Dias’ low cross made its way past Denis between the sticks, with the Brazilian caught lacking in his timing at the back post.

The crossbar was all that stood between Taarabt and the end of Benfica’s search for goal number two in the second period, as the Moroccan midfielder’s volley smashed against the top of the crossbar in the 67th minute.

Later, Vlachodimos stood firm to deny Hugo Vieira from clawing back an equaliser in the 73rd minute, just as Denis did to deny Cervi from doubling Benfica’s lead in stoppage time, but just the one goal would turn out to be enough to propel Lage’s men back to the top.

Dear Jackson Martinez, your Ferrari will be delivered shortly, nice doing business with an old associate! Yours faithfully, PDC

Jackson Martinez was MoM. His “penalty” was about as legit as a democratic election in China.