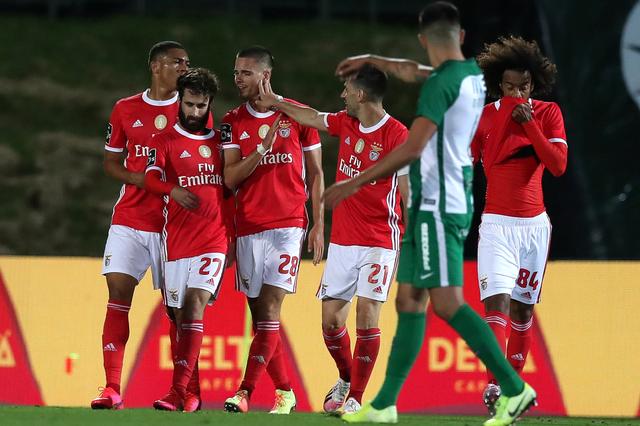 Benfica have moved back level with table-topping FC Porto on points after the Dragons’ slip-up was capitalised upon by the Eagles with a 2-1 away win over nine-man Rio Ave.

In action first on Tuesday night, Sergio Conceição’s side found no way through a resilient Desportivo das Aves team in a goalless draw, having missed a controversial first-half penalty.

The stalemate opened the doors for Benfica to match league-leaders Porto with 69 points, turning a 1-0 deficit around, after a great deal of suffering, and defeating Rio Ave 2-1 with a late Julian Weigl winner. PortuGOAL brings you more from the tussle at the top of the Primeira Liga table:

It was last versus first place at the Aves Club Complex as the hosts, a staggering 50 points behind the league leaders, took on a Porto side also evidently hungry for a result in the race for the title.

After 20 minutes of football, the visitors were handed a way in front after Fabio Szymonek punched away a cross into his box before clipping Otávio on the follow-through, committing, in the official’s eyes, a penalty.

Zé Luís was charged with the responsibility of converting the spot-kick in the 22nd minute but would lose his battle up against Fabio, guessing correctly to deny the Cape Verdean his goal.

The second half saw even more of Fabio in action, stopping Luis Diaz early on two occasions before providing a big save to keep out a venomous Sérgio Oliveira strike from range in the 69th minute.

Tiquinho Soares upped the search for the opener, deep into seven minutes of stoppage time, with a downward header bouncing just over moments before Moussa Marega brought another important stop out of Fabio.

Courtesy of the Brazilian shot-stopper’s display, Porto’s strikers prolonged their six-hour wait for a goal as the Dragons themselves failed to find the back of the net for the first time in 40 league games, drawing 0-0.

Rio Ave boss Carlos Carvalhal promised a side capable of looking Benfica in the eye and, upon a positive start from the Eagles at the Estádio dos Arcos, the Vilacondenses didn’t disappoint with their response.

From a Nuno Santos in-swinging free-kick, Dyego Sousa was unfortunate enough to head the ball into Mehdi Taremi’s path in the 28th minute, enabling the striker to nod in comfortably with his head and give Rio Ave the lead.

The Santos-Taremi combo looked keen to inflict further damage on a shaken Benfica, with only Nuno Tavares standing between the Iranian striker and a brace.

Bruno Lage turned to Haris Seferovic coming into the second half and the Swiss striker almost repaid his manager instantly with a header slamming against the bar, just two minutes into the restart.

Fortunes soon turned, however, as Rio Ave witnessed Al Musrati pick up a second yellow card in the 62nd minute to leave them down to ten men, just a couple of minutes before Seferovic was tucking in Tavares’ cross for the Eagles’ equaliser.

The game took a bitter turn for the hosts in the 72nd minute, with the VAR acknowledging Santos’ high-foot challenge on Pizzi and leaving Rio Ave to fight for a point with just nine men.

Benfica landed the Europa League hopefuls the conclusive blow in the 87th minute, turning the game around through Julian Weigl who was able to rise unmarked and head in Pizzi’s corner, clinching three crucial points for his team.

Watched both these games and both were hard-fought and entertaining with some bad refereeing decisions. That penalty decision for Porto was laughable and the 2 sendings off a little harsh on Rio Ave. Good to see the young Porto RB get gametime...

Watched both these games and both were hard-fought and entertaining with some bad refereeing decisions. That penalty decision for Porto was laughable and the 2 sendings off a little harsh on Rio Ave. Good to see the young Porto RB get gametime and Otavio/Sergio Oliveira were busy but theyre really lacking up top and without Corona would be in trouble.

Bruno Lage got it wrong - no idea why he waited until half-time to make changes and then even later to make more changes. Seferovic is crap but he got the goal Sousa couldn't and Vinicius should have been on sooner. 4.4.2 works best for these players so drop the 4.3.3. Nice work by Tavares on the right.
A question for anyone who knows - what has happened to Zivkovic? I remember watching him a few seasons ago and thinking he'd be a real talent!